Two charged in federal case involving robberies at ATMs in Texarkana, region | In two cases, stolen pickup truck and a chain were used 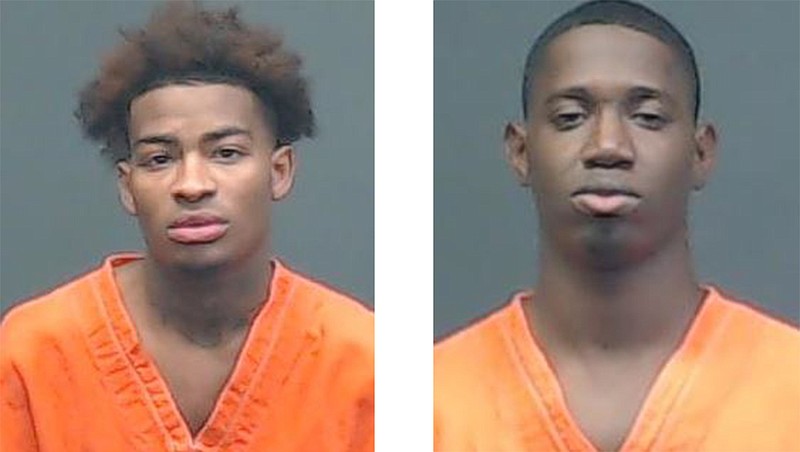 TEXARKANA, Texas - Multiple defendants are charged in a federal criminal case accusing them of conspiracy to commit bank theft.

An indictment filed in August in the Texarkana Division of the Eastern District of Texas remains under seal, likely because only two of at least seven defendants have appeared in court for arraignment. One of the two men who has appeared in court, Corde DeAndre St. Jules, 19, has been in the Bowie County jail since being arrested in connection with the theft of cash from an ATM in Wake Village in February.

St. Jules allegedly had a large number of new $20 dollar bills stuffed in his pants when he was stopped Feb. 2 in Queen City, Texas, by local police and state troopers while driving a red Camaro matching the description given to police by a witness, according to a probable cause affidavit.

Wake Village police responded to an ATM alarm in the 5100 block of W. 7th Street shortly after 5 a.m. Feb. 2. When officers arrived, they found a white Ford F-250 truck backed up to the ATM with a chain connecting it to the front of the machine, which was lying on its side on the ground.

A yellow crowbar, a chain with two J hooks and a styrofoam cup with some coffee left in it were found at the scene. Investigators determined that three of the machine's four cash drawers were missing. The pickup was determined to have been stolen from a motel parking lot in Texarkana, Texas.

While police were still at the scene of the theft, a Texarkana, Texas, investigator contacted Wake Village investigators about a red Camaro which had been stopped as it traveled south on U.S. Highway 59 by Queen City police and Texas Department of Public Safety troopers.

"St. Jules acted as if he wanted to cooperate but wanted a guarantee he would go home today," the affidavit states.

"There have been multiple ATM thefts fitting this method of operation in the Northeast Texas region over the past few weeks. Information from other thefts have concluded the suspects were gang members from Houston, Texas," the affidavit states.

Since his arrest in February on a charge of theft of property, St. Jules has been charged in Bowie County with engaging in organized criminal activity and with possessing a cell phone in the Bowie County jail.

A probable cause affidavit accusing St. Jules of organized criminal activity refers to an ATM theft which occurred Jan. 27 in the 4200 block of Gibson Lane in Texarkana, Texas. Like the theft in Wake Village less than a week later, a stolen pickup truck and a chain were used in the Gibson Lane theft.

Records show Solomon was booked Sept. 10 into the Bowie County jail and is being held for U.S. Marshals.

Once other defendants named in the federal case have appeared in court, the indictment charging them may be unsealed.