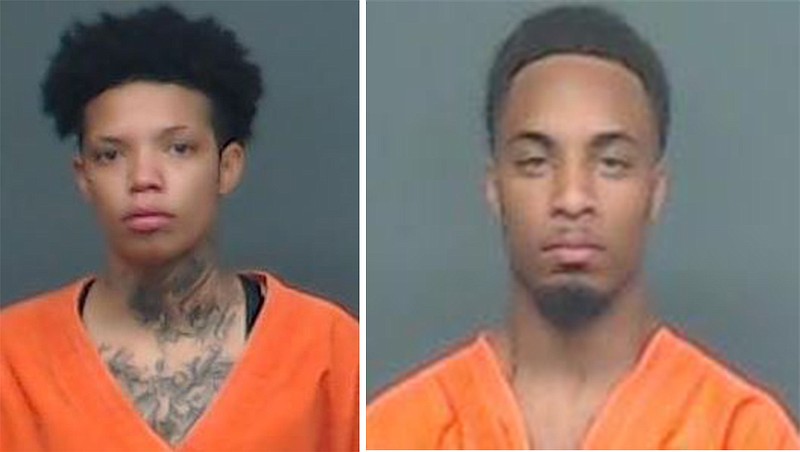 TEXARKANA, Ark. - An alleged roadway confrontation between a pedestrian and the occupants of a passenger car has led to formal charges of murder and assault for a man and woman in connection with a shooting outside a Texarkana nightclub in July.

Tandraniqua Sharnell Burris, 28, and Jacarious Desean Johnson, 19, are both accused of murder in the fatal, July 10 shooting of Aaron Brown on 49th Street near Whiskey River bar. A woman was struck in the leg by a bullet as well and suffered a non-lifethreatening injury.

Burris was allegedly driving a silver four-door car with Johnson in the front passenger seat, according to a probable cause affidavit. Witnesses allegedly reported seeing the car almost strike Brown, who was walking across the road around midnight.

Burris has been charged with murder, aggravated assault and possession of a firearm by a felon. Bowie County court records show Burris pleaded guilty in 2017 to possession of a controlled substance and assessed a five-year term of probation. Burris' arrest in Miller County could result in a motion to revoke her existing probation in Bowie County.

Johnson has been charged with murder and aggravated assault.

Both defendants face 10 to 40 years or life in prison if convicted of murder. An enhancement for the alleged use of a firearm in the commission of a felony could mean up to 15 additional years in prison which must be served consecutively to any term assessed in the event of a murder conviction.

If found guilty of aggravated assault, Burris and Johnson face up to six years in prison and a fine up to $10,000.

Burris faces five to 20 years in prison and a fine up to $15,000 if convicted of possessing a firearm after a felony conviction.

The cases have been assigned to Circuit Judge Wren Autrey. Both defendants are expected to appear for arraignment on the charges next month.

Both Burris and Johnson are being held in the Miller County jail.

El Dorado, Greenwood set to collide for 6A state crown
by Tony Burns
Perseverance pays off for Strong in dramatic victory
by Jason Avery
CWD detected in south Arkansas; deer harvested at Felsenthal refuge
by Special to the News-Times
Strong rallies past Mountain Pine to win 2A 8-Man state title
by News-Times Staff
Burns the focus of opposing defenses
by Tony Burns
ADVERTISEMENT