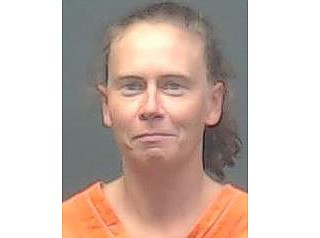 TEXARKANA, Texas - A woman who was booked into the Bowie County jail in May on charges of resisting arrest is now facing felony charges for alleged assaults on correctional officers.

Amanda Holland, 39, was arrested by Texarkana Texas Police Department officers May 22 for two counts of misdemeanor resisting arrest, according to court records. Two days later, Holland allegedly "became combative" with jail staff as she was being escorted back to jail following a court appearance.

Holland allegedly threw herself to the ground and managed to "slip" her handcuffs during the routine transport from court to the jail, according to a probable cause affidavit. Holland allegedly began kicking and fighting with officers, wrapping her leg around a female officer's knee.

The officer's knee allegedly became dislocated as a result of the confrontation and required emergency medical attention and follow up care for the injury.

The two misdemeanor resisting arrest charges stemming from Holland's arrest May 22 remain pending. Both counts are punishable by six months to two years in the Bowie County jail.

Holland has been indicted for aggravated assault on a peace officer for the alleged assault May 24. She faces five to 99 years or life in prison if convicted. Holland pleaded not guilty to the charge Monday at a hearing before 5th District Judge Bill Miller.

The case involving the alleged assault Sept. 3 has not yet been presented to a grand jury for possible indictment. If convicted of assault on a peace officer in that case, Holland faces two to 10 years in prison.

Holland is currently being held in the Bowie County jail. Holland's bails on the felony charges total $190,000.