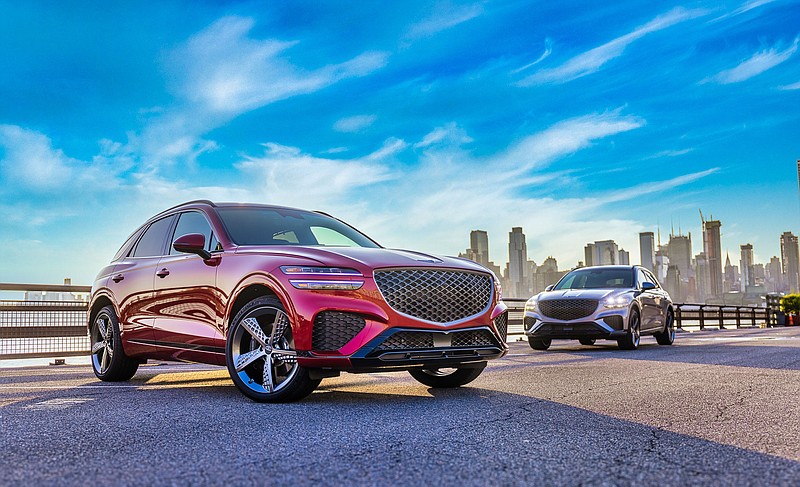 Elegant, powerful, athletic but serene: it is hard to find anything to dislike about Genesis' compact SUV, the GV70.

Some reviewers put the baby Genesis SUV at the head of the class because it is a clear value leader over German rivals. Others raise reliability questions because Genesis is the luxury arm of Hyundai, and there are reasons to wonder what's going on under the hood of the Korean powerhouse.

In a saga that still yearns a final act, the U.S. National Highway Traffic and Safety Administration this week reopened its probe into engine fires that have plagued Hyundai and Kia vehicles for more than six years. Hyundai in 2019 agreed to pay a record civil penalty of $210 million related to non-collision engine fires caused by inadequate oil flow.

A big chunk of that money went to a former senior Hyundai engineer, Kim Gwang-ho, who received a $24 million whistleblower payout after he provided internal evidence that executives tried to cover up recalls and failed to act promptly to protect consumers. Before Kim's report, NHTSA and Hyundai had settled on an $81 million fine

Now NHTSA is opening an "engineering analysis" of the efficacy of Kia's and Hyundai's recall of roughly 3 million vehicles. The agency said it was aware of 161 fires in the 2011-2014 Kia Optima and Sorento, the 2010-2015 Kia Soul, and the 2011-2014 Hyundai Sonata and Santa Fe. The analysis could result in further recalls, more fines, or nothing.

Simultaneous to that news, Hyundai announced the largest executive shakeup in its history, replacing more than 200 mid-tier executives. It also said it was shuttering its internal-combustion engine research division to focus on electric and hydrogen-powered vehicles.

Among those benefitting from the changes was auto designer Lee Sang-yup, who was promoted to executive VP of Hyundai Global Design. Lee was the brainchild behind Genesis' two award-winning SUVs, the midsize GV80 and GV70. Whether this was a housecleaning or a quickening of the pace of Hyundai's earlier announced intent to switch to EVs, it seems apparent that neither Lee nor the GV70 is part of the problem.

At the beginning of every season, Super-Bowl-winning NFL coach Bill Parcells gave his teams the "they don't know" speech. All the reporters, all the talking heads, all the fans, all the hot dog vendors, even all the cheerleaders would voice opinions about the team, Parcells said, adding that the only ones who knew what was happening were in the locker room, in the weight room, in the meeting rooms, and on the practice field.

"Ignore all that and stay out of those conversations," Parcells told his players. "They don't know."

Assuming, then, that the people running Hyundai Motor Group, South Korea's second-largest conglomerate do know, let's also assume that publications like Consumer Reports that knock down the GV70 because, "well, it's a Hyundai," have neither qualitative nor quantitative evidence to support such a finding.

On the other hand, in October, MotorTrend named the GV70 the 2022 SUV of the year. It also awarded the vehicle with its annual Golden Calipers Award, which considers six criteria: safety, efficiency, value, advancement in design, engineering excellence, and performance of the intended function.

"We're thrilled to honor the Genesis GV70 with our SUV of the Year award," said MotorTrend Group Head of Editorial, Ed Loh. "The GV70 astounds in the way it achieves all-around excellence thanks to its fresh design, ample power, comfortable ride quality, and impressive feature set; MotorTrend's 2022 SUV of the Year hits all the right notes and does it all at an unbelievable price."

We tend not to echo anyone around here, but it sure looks like MotorTrend has it right. The GV70 is a heckuva lot of ride for the money. Auto writer evaluations tend to be qualitative and subjective. So, too are those of quality expert J.D Power, which in October rated Genesis the top-ranked brand overall and the leader in technological innovation.

More quantitative and objective are the findings of the Insurance Institute for Highway Safety, which in September gave the GV70 its highest possible rating as a TOP SAFETY PICK+. The complete Genesis lineup, three sedans and two SUVs, has earned the coveted awad.

Put us among the subjective reviewers, because we lack the expertise and resources to do performance testing and engineering analyses. Blonde Bride and I focus on six areas: internal and external styling, driveline, suspension, technology, and safety. The GV70 puts bold and emphatic checkmarks in all six boxes.

On the outside, from its aggressive Crest Grille to bold dual exhausts, the GV70 seems chiseled and athletic. Standing still, it looks fast. A parabolic line that flows from quad headlamps and down the body is complemented by a coupe-like roofline.

The cabin emphasizes premium materials expressed in simple, yet emotional shapes. Like airplane wings, elliptical elements form the dominant motif. Bold colors add an aura that is young, refined, and sporty. Seating is as good as anything found in a Mercedes or Volvo, while gauges, infotainment system, and switchgear are instinctive for a digital generation.

All GV70s are AWD and come with four driving modes, from sport to eco. This is not the sort of machine in which one crawls rock, but it is certainly more than capable on a wet and winding, mountainous Forest Service Road.

Handling begins with the chassis and the GV70 is state-of-the-art. Lightweight technologies and ultra-high tensile steel give the machine a safe, well-planted foundation.

Genesis' safety technologies, from passive design features to driver-assist software, are as good as it gets. The GV70 keeps itself centered in its lane and a safe distance behind vehicles in sotto voce, without drama.

Highway Driving Assist makes life on the open road comfortable by controlling the steering wheel when changing lanes and actively responding to close-range, low-speed, cut-ins. Intelligent Speed Limit Assist controls vehicle speed based on the local speed limit. One assumes Genesis had me in mind when it designed this feature.

More seriously, but no less a regression is this: Industry analysts say a key variable for automotive success, indeed, survival, over the next decade will be the ability to design software. Genesis and Hyundai, which now controls automotive robotics expert Boston Dynamics, appear to have a leg up.

For example, GV70 is the first vehicle to feature radar-based Advanced Rear Occupant Alert, which is much more sophisticated than previous systems. Sensors mounted inside the vehicle detect passengers in the rear seat and alert the driver of their presence.

And, like all Hyundais and Kias, Genesis vehicles come with the best warranties in the business, which include 10 years/100,000-mile powertrain protection, plus three years of free maintenance, and service valet care. So you can tell those folks peddling extended warranties to kiss your grits.

Bottom line: It's risky to forecast the future, but it seems certain that it will include Genesis. 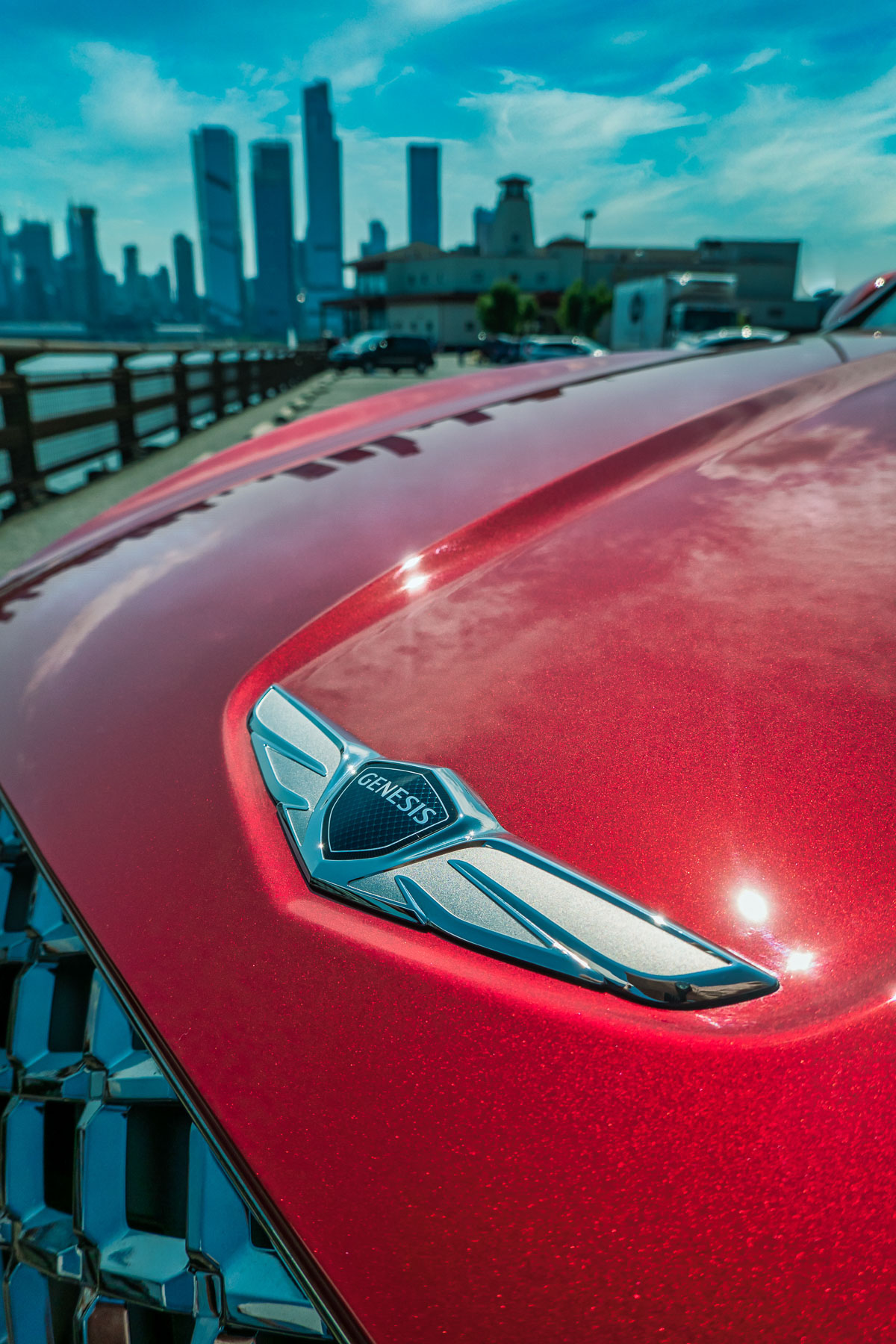