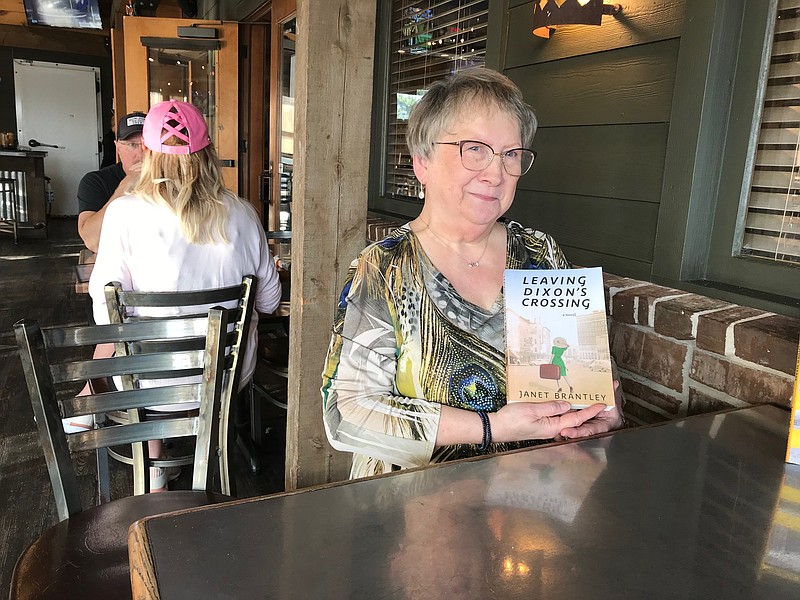 Former Texarkana area native Janet Brantley displays a copy of a recent novel she wrote titled "Leaving Dixon's Crossing." The book is a fictional account of a young woman who comes to live in Texarkana shortly before the outbreak of World War II.The circumstance leads her to take up a job at the Lone Star Army Ammunition Plant. (Staff Photo By Greg Bischof)

In it, Brantley takes readers back to a period in the Twin Cities between mid-spring of 1941 to early 1943. There, a fictional, newly graduated from high school 18-year-old woman named Mae Johnson exits her fictional hometown (Dixon's Crossing, Arkansas) seeking brighter work prospects in Texarkana -- something that would surely beat the gruelling, unpromising life of post Great Depression era sharecropping.

Upbeat about her future at first, the Pearl Harbor attack soon torpedoes Johnson's hopes of whatever hospitality jobs there may be and replaces them with bullet, grenade and bomb manufacturing at Texarkana's two freshly built war production centers: Red River Arsenal and the Lone Star Army Ammunition plant.

Faced with the additional societal challenge of young men leaving for overseas and women needing to produce the ammunition, Johnson finds her ability to cope in serious doubt, although she seems to manage.

When it comes to what prompted her to write this novel, Brantley freely admits the grinding research she had to perform to complete her dissertation gave her, her own leg up.

"This book actually started 30 years ago, when I chose a topic for my doctoral dissertation at the University of North Texas, in Denton,"she said. "The topic I decided to zero in on for my research was one I titled as 'Defense Industries in Northeast Texas 1941-1965: The Social and Economic Impact on Bowie County.' At that same time I entered the University's doctoral program in 1991."

From that point forward, Brantley said she interviewed people from throughout both Bowie and Miller counties, who had worked at both defense plants during World War II.

"Those interviews introduced me to some fascinating people and it also allowed me to get better acquainted with others I had known all my life, including my own father, Noah Brown," she said.

Besides the interviews, Brantley said she also researched the records of both defense plants - enough records to fill about four dozen boxes.

"All together, it took about a year and a-half to write the dissertation," she said. "I also went through census records, war records and military records. My dissertation did indeed inspired me to write this novel."

Ten years following her marriage, Brantley decided to go to college, first to Texarkana College then to East Texas State University-Texarkana, which at the time, still consisted of one building on the TC's campus.

As her quest for education grew, Brantley would first earn an associate's degree at TC in social studies, before going on to earn a bachelors degree in the same field, followed by a master's degree in special in education. From there, she launched into a public school education career in 1983.

However, Brantley's years in public school continued to fuel her thirst for more personal academic achievement as well as a desire to teach higher education. This led her to continue in college in 1991.

"Once I quit teaching public school, I went back to college at North Texas State University (later to be renamed the University of North Texas)," she said.

Upon earning her doctoral degree in August of 1995, Brantley returned to Texarkana to teach history and geography at TC as well as at Texas A&M University-Texarkana -- which is what ETSU-Texarkana had become.

Brantley said it took about three years to write the novel. She hopes to continue the story in two more books, turning it into a trilogy.

As for this volume: "It was something that had been on my heart for years and I just had to get it written,"she said. "I also want thank my late husband, Bill Brantley, because without him, my writing journey might never had gotten off the ground."