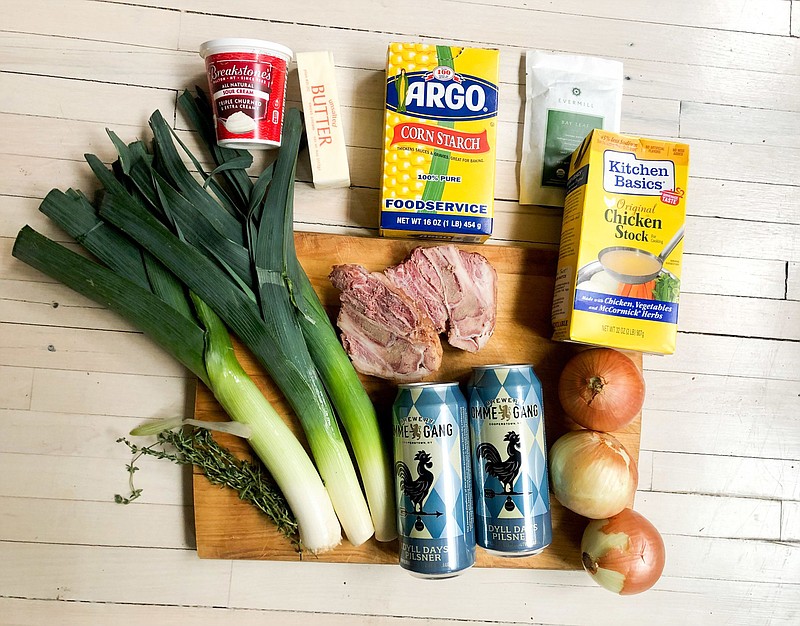 The ingredients for beer soup. MUST CREDIT: Bloomberg photo by Kate Krader

Let us now praise the virtues of soup: There's no better food for this time of year. A bubbling pot is the best antidote to the outer chill. Beyond that obvious appeal, it's also one of the most forgiving dishes you can make.

Unlike baking, in which precision is key and an errant tablespoon or two of butter can wreak havoc on a pastry, or roasting, in which a couple of additional minutes can spell disaster for a chicken or pork loin, soup can absorb just about anything you throw at it. Too much salt? Stir in a little milk or cream, or add a raw potato to absorb some of the over-seasoned liquid. Too watery? Just keep simmering to intensify the broth.

While the tomato and chicken noodle classics function as the food world's version of fuzzy slippers, let's make way for a new standard: beer soup.

"This is a favorite soup in Alsace, where we use a lot of beer in cooking," writes Gabriel Kreuther in his new The Spirit of Alsace, a Cookbook, with Michael Ruhlman (Abrams; $60). It's a golden, thick concoction made with chicken stock, plenty of onions, a smoky piece of pork, and the namesake ingredient. It's one of more than 170 recipes that Kreuther, chef-owner of his eponymous two Michelin-starred restaurant in Midtown Manhattan, grew up with.

Other dishes include his famed tarte flambée, topped with the fresh cheese fromage blanc and bacon; directions for making your own liverwurst; and choucroute garni, the gut-busting Alsatian dish that features sauerkraut and an array of sausages and ribs. Nothing went to waste when Kreuther was growing up on a farm in the scenic northeastern region of France that borders Germany. Leftover roast would become the filling for stuffed potatoes, and the potato trimmings would become pancakes.

Even if your name isn't Homer Simpson, beer soup has obvious appeal. When he was chef at the Modern in New York, Kreuther says the version he made there was so popular, he had to make it by the gallon: "I had people have one, and then they ordered a second." To fancy it up, he would garnish it with scallops, uni, and ruby-red shrimp from Maine.

But the soup is just fine without the high-end additions. It is wonderfully homey, reminiscent of a good French onion soup with the sweet bite of sauteed leeks and onions, the rich tang of sour cream, and the pervasive smokiness of the ham in the mix.

The most notable taste, however, comes from the beer that makes up the soup's base. It adds a compelling bitterness, offset by the sugar that's stirred in at the end-and a heady punch, even if much of the alcohol has cooked off. You can also finish the soup with some ground cardamom and cloves for maximum soothing effect. "The spices create layers of flavor. It hits you, then fades away and keeps your interest going," observes the chef.

As to what beer to use for the all-important signature ingredient, Kreuther recommends a pilsner rather than a hoppy IPA, which can get too bitter when you reduce it. If you're not drinking, a non-alcoholic beer will also produce a supremely comforting dish.

The following recipe is adapted from The Spirit of Alsace, a Cookbook, by Gabriel Kreuther with Michael Ruhlman

4 cups leeks, white and light-green parts only, cleaned and cut into 1/2 inch pieces

1 teaspoon salt, plus more to taste

Tied the thyme, bay leaves, peppercorns, clove and cardamom together in cheesecloth or a coffee filter. In a large saucepan, combine the onions, leeks, and butter. Cook over medium-high heat, stirring occasionally and adding the teaspoon of salt as you do, until translucent, about 12 minutes. Do not allow the onion to brown. Add the beer, bring to a simmer, and cook gently until reduced by half, about 15 minutes.

Add the chicken stock, pork knuckle, and the herb package, and bring back to a simmer. Cover partially, about three-quarters of the way, and continue to simmer for 45 to 60 minutes.

Remove the pork knuckle and sachet. While the pork knuckle is still warm, separate the meat from the bone; discard the bone with the fat, and the gristle. Break down the meat by cutting it into smaller pieces or shred it by hand, and set aside. Add the sour cream, sugar, and nutmeg to the soup. Taste and adjust seasoning as necessary.

If the soup is too thin for your taste, stir in the slurry and simmer until thickened. Add the meat and an additional dollop of sour cream if desired, and serve hot or warm. 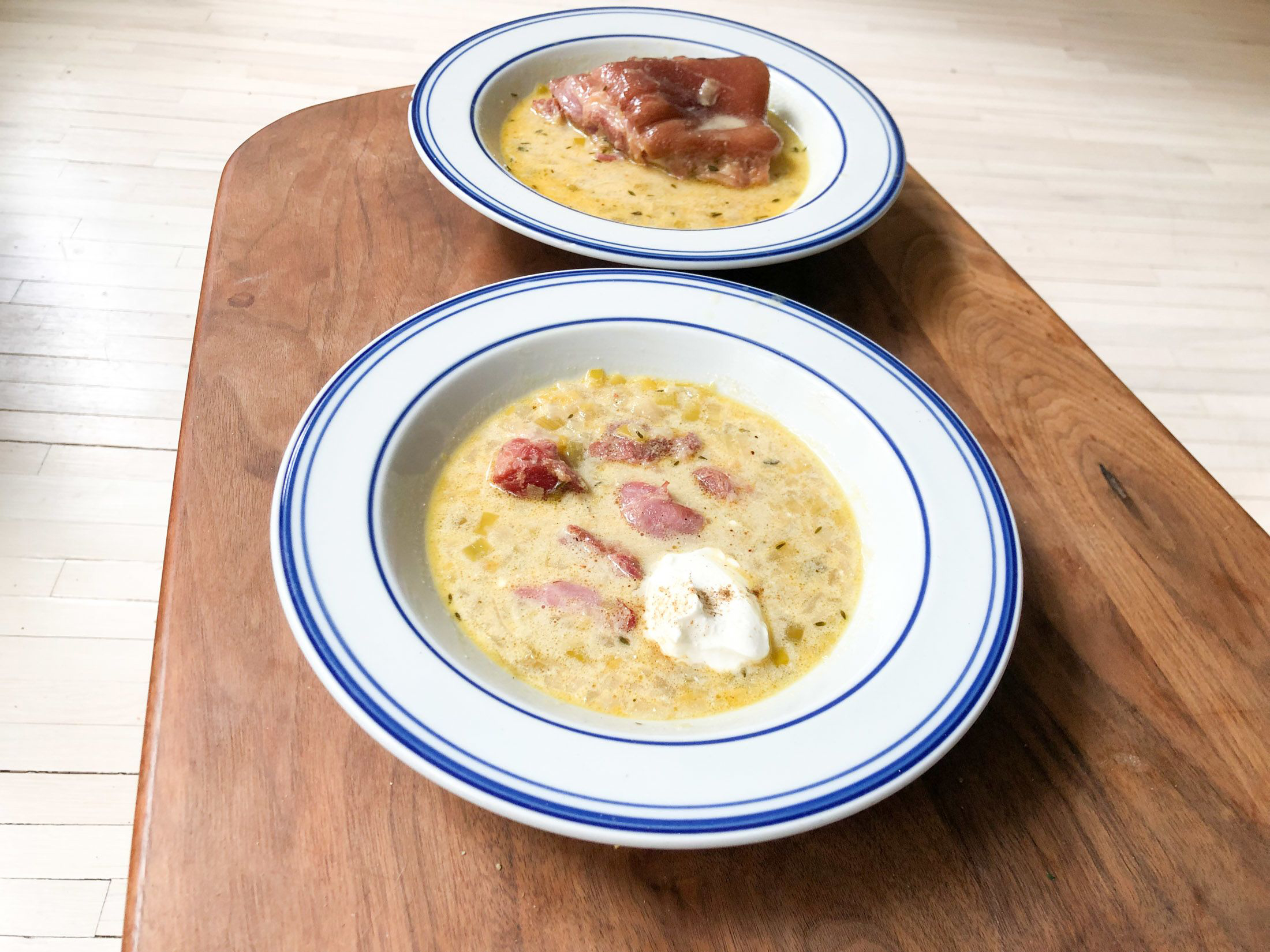 Print Headline: Beer soup from a top chef will get you through any cold snap