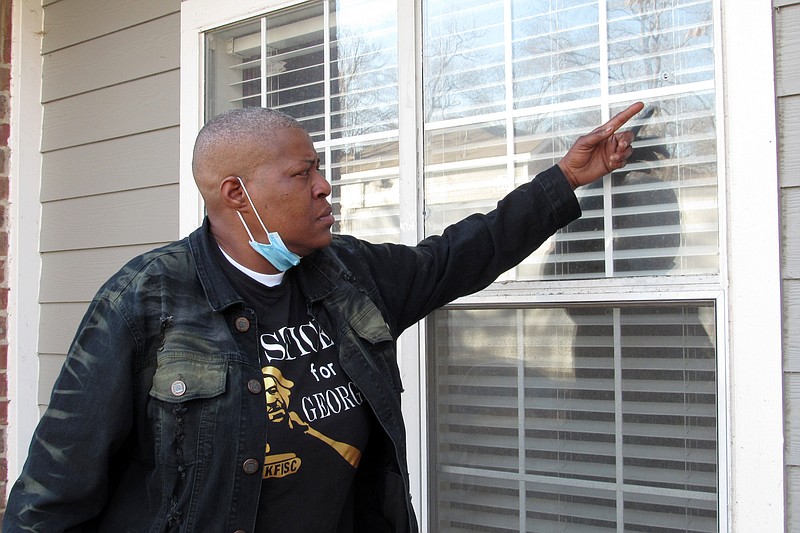 LaTonya Floyd, the older sister of George Floyd, gestures towards a bullet hole in the window of her apartment, Thursday, Jan. 6, 2022, in Houston, as she discussed the New Year&#x2019;s Day shooting that wounded her and her brother&#x2019;s 4-year-old grandniece, Arianna Delane. Arianna remained hospitalized on Thursday as she was shot in her side and the bullet pierced her liver and lungs and broke three ribs. (AP Photo/Juan A. Lozano)

HOUSTON -- Houston police and city officials are investigating an hourslong delay by authorities in responding to a shooting early on New Year's Day in which the 4-year-old grandniece of George Floyd was wounded while she slept in her Houston apartment.

The family of Arianna Delane says the girl was sleeping in an upstairs bedroom next to her grandmother at about 3 a.m. on Saturday when someone fired several shots into their apartment.

Arianne is the grandniece of Floyd, a Black man who grew up in Houston and died in Minneapolis in May 2020 when a white police officer pressed his knee onto his neck during an arrest. Former Minneapolis police Officer Derek Chauvin was convicted in April of state murder and manslaughter charges in Floyd's death and was sentenced to 22 1/2 years. Floyd, whose death triggered protests around the country in 2020, was laid to rest in the Houston area.

LaTonya Floyd, George Floyd's older sister and the girl's great-aunt, said when police and paramedics didn't immediately arrive after the family called 911, they drove Arianna to the hospital. Police didn't arrive at the apartment until around 7 a.m., four hours after Arianna was shot.

"We didn't wait ... The baby had to get to the hospital. If we didn't get her there when she did, she would have died. The doctor said that," LaTonya Floyd told The Associated Press on Thursday.

LaTonya Floyd said she and her family are very upset with the delayed response to their 911 call.

Arianna's family members say they're not sure why their apartment was shot at several times.

Arianna remained hospitalized on Thursday. She was shot in her side and the bullet pierced her liver and lungs and broke three ribs. No arrests have been made.

Houston Police Chief Troy Finner and the Houston Emergency Center, which handles 911 calls for the city, have announced separate investigations into the delayed response.

"Collectively, we will determine whether changes in protocols and training will need to be made as to how calls are handled and coded for dispatch," Finner said in a statement.

Doug Griffith, president of the Houston Police Officers' Union, said he believes the call was miscoded not as a shooting but as a less urgent call.

Griffith said officers did respond quickly to the apartment complex where Arianna lives after they were notified by ShotSpotter, an algorithm-powered detection technology used by law enforcement to detect gunfire.

"They drove around the complex. Nobody flagged them down. They didn't see any spent casings or anything like that. They cleared it," Griffith said.

The notification by ShotSpotter, which came at 3 a.m., did not give a specific apartment that officers needed to go to but only that there had been gunfire near the complex.

Emergency Medical Service workers arrived at the scene within six to seven minutes after the shooting, but no one was there anymore, Griffith said.

Finner said officers who responded to the area around the apartment complex after the ShotSpotter notification didn't know that Arianna had already been taken to the hospital in a private vehicle within three to four minutes after the shooting.

"'We continue to pray for her recovery," Finner said.

The Houston Emergency Center says an initial review indicates Houston police were not notified about the shooting at the same time as medical personnel.

Griffith said Houston police were short-handed on New Year's Eve as over 400 officers were out sick with COVID-19 and notifications by ShotSpotter were "dropping like crazy" and continued through 6 a.m. on New Year's Day.

LaTonya Floyd said she is confident that whoever is responsible for shooting her grandniece will be arrested and that the investigation into the delayed response will result in improvements to how such calls are handled.

"We will get justice for our niece," she said.