Part memoir, part history by a lawyer who fought foreclosures on family farms in the 1980s 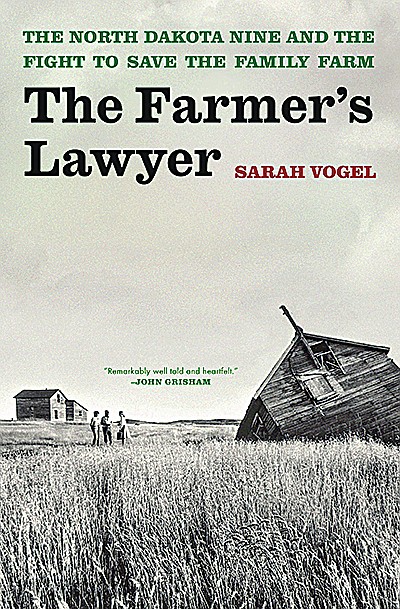 Farming has never been an easy profession. The work is physically demanding and at times dangerous, commodity prices are capricious, agribusiness giants control the market, and the whims of Mother Nature are often cruel. Also, the hours suck.

That's all to say it's always required hardy souls to make a living working the land. And, at least in recent history, that was perhaps never truer than in the early 1980s, when low prices and widespread debt drove thousands of family farmers across the U.S. and particularly in the Midwest out of business. More than a full generation later, the '80s farm crisis still echoes across rural America.

Sarah Vogel returns to that grim era in "The Farmer's Lawyer," which recounts her work as the lead attorney for a group of North Dakota farmers whose lawsuit against the U.S. Department of Agriculture led to a nationwide class action that eventually overturned the heavy-handed lending practices that drove rampant farm foreclosures. Part memoir, part populist political history and part courtroom drama, Vogel's book is a charming, at times compelling recollection of a singular time in U.S. agriculture.

Born in Bismarck in 1946, the daughter of a federal judge and state Supreme Court justice and the granddaughter of a politician and strategist, Vogel and her family history are intermingled with the rise of North Dakota's Nonpartisan League, a socialist movement that espoused state-run banks, mills and grain elevators to loosen corporate control of agriculture. Vogel convincingly credits Nonpartisan League-backed politicians with helping to create an agricultural safety net during Franklin Roosevelt's presidency that allowed many farmers to climb out of the Great Depression.

"As a young girl growing up in a League family, I absorbed the lessons of the 1930s from my father," Vogel writes. "I believed that during terrible economic times, foreclosures of farmers were unjust and unfair."

Just a few years into her legal career, Vogel got the opportunity to put those principles into practice. A single mother working as an attorney for the U.S. Treasury Department, she decided at the end of the Carter administration to return to North Dakota and build her own legal practice. Soon, an old acquaintance with ties to financially troubled farmers started handing out her name and number across farm country. Before she could help it, Vogel writes in her amusingly wry voice, she was "building a law practice for farmers who couldn't afford my fees."

Through emotional, sometimes painful meetings with farmers in deep financial distress, Vogel began to see a pattern of what seemed like predatory lending practices by USDA's Farmers Home Administration (FmHA). Driven by the new Reagan administration's budget-cutting zeal, The FmHA was pushing farmers to quickly liquidate their farms and related assets to settle their government debts. If the book bogs down a bit as Vogel labors to explain the complexities of FmHA policies and their implications for farmers, you sense that she sees it as important to record what exactly happened so that it never happens again.

"The Farmer's Lawyer" picks up momentum as Vogel builds to the courtroom showdown over Coleman v. Block, in which she represented a group of nine North Dakota farmers against lead defendant John Block, then the U.S. agriculture secretary (farmers called him "Auction Block," Vogel writes). She self-deprecatingly describes her own courtroom inexperience, admitting she lucked out with a sympathetic judge as she faces a government defense team that seemed at times under-prepared, at times needlessly malicious.

Her eventual legal win helped launch Vogel's own political career. A Democrat, she served two terms as the elected North Dakota agriculture commissioner, wrapping up her tenure in 1996 just as the state's politics took a hard-right turn. Finishing "The Farmer's Lawyer," you wonder if political circumstances will ever arise in the future and reanimate the kind of prairie progressivism that Vogel once embodied.

Print Headline: Part memoir, part history by a lawyer who fought foreclosures on family farms in the 1980s