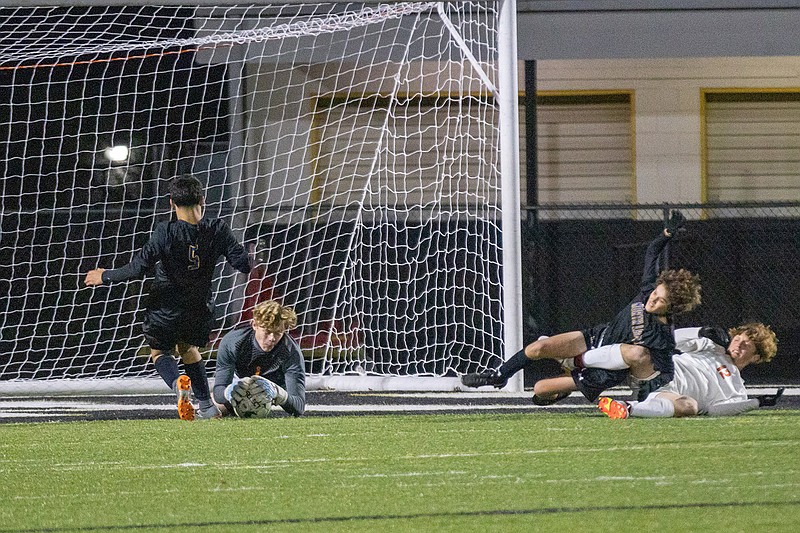 Texas High goal keeper Mathew Delk saves a strike on goal while Tigers defender Braden McKinnon, No. 12, on the ground to the right, helps defend the play. (Photo courtesy of www.BillMiller-Photo.com)

PITTSBURG, Texas -- The Texas High Tiger Boys soccer team extended their unbeaten streak to six games and a brought home the first tournament championship in at least four years when they swept through their four matches of the Mayben Elite Tournament held here last week.

Tiger Coach Zak McCarthy praised the hard work and success of his team in the tournament. "I'm so proud of all the guys and how the team is progressing," he said. "This is only the beginning, I believe we have a lot to look forward to."

He said fans can expect a team that works hard and is committed to doing their best.

"As the pre district schedule progresses the games get harder so it's all about stepping up and raising our quality week in week out to prepare for a challenging district schedule," McCarthy said. I look forward to us enjoying this well-earned victory and keep going next week!"

The Tiger team showed improvement in each match they played in the tournament.

The Tigers opened tournament scoring in the eighth minute of the match when Sam Tettamanti took a pass from Austin Miller and buried it in the back of the panther net. Two minutes later Vincente Jaramillo scored a second goal off a corner kick. The Tigers dominated possession for the middle portion of the half without scoring again until Miller challenged a Panther player at the midfield circle and took possession. Once in possession he made a solo run to the edge of the penalty area and fired a shot to the goal for Tigers' third goal of the match. The Tigers led 3-0 at the half.

If the first half seemed easy to the Tigers, the second would prove just the opposite. The Panther attack provided life to the squad in the 55th minute when they penetrated the penalty area from the right and buried a shot to the upper left corner of the Tiger goal. Twelve minutes later the Panthers scored a second goal on a corner kick. The Tigers held on for the win.

The Tiger team left Texarkana before dawn on Friday morning to meet the tournament hosts in a match with a 9 a.m. scheduled start time. The Pirates traditionally dominate their home tournament and have presented problems to Texas High's ambitions in years past.

The match remained deadlocked at zero for the first 20 minutes of the match. The pirate offense spent the first 10 minutes on the Tiger end of the pitch. From that point on the Tigers had the attacking advantage with more shots and more shots on goal.

The determinative moment in the match came in the 21 minute. A Pirate defender passed the ball back to the Pittsburg goalkeeper. By rule a goal keeper may not touch the ball (even inside the penalty area) with his hands. So when the Pirates' keeper pick up the ball and attempted to play it to another Pittsburg player an official called the foul and awarded the Tiger an indirect kick (meaning a second tiger player must touch the ball after it is played before a shot can be taken).

Austin Miller acted quickly when he realized the officials call. He made a short pass to midfielder Alijah Garza who shot the ball into an open net. In spite of numerous shots by both sides in the remainder of the match this was the only goal of the match. The Tiger defense and keeper Mat Delk preserved the first clean sheet of the tournament.

The Tigers entered the final match of pool play with two victories. For the third match of the tournament, they faced the Red Devils. The Tigers began quickly with a goal by Austin Miller which was assisted by Sam Tettamanti in the first minute. Seven minutes later Miller doubled the lead for the Tigers with another goal, this one assisted by Alijah Garza. In the eleventh minute Garza added a goal of his own when Tettamanti provided another assist.

From that point the Red Devils defense held the Tigers scoreless for ten minutes before Miller returned the favor with a pass to Tettamanti that he drove home for the fourth goal of the match. Seth Trusty ended the first half scoring for the Tigers with a thirty-yard strike for a goal in the 23 minute. The Tigers took a 5-0 lead into the locker room.

The Tigers picked up where they left off at half with a goal off of a corner kick by Frank Delk five minutes into the half. Delk provided another goal four minutes later when he followed a shot by Francisco Perez that was punched out by the Red Devil goalkeeper and put a shot into the net. Perez added a goal of his own in the fiftieth minute.

Trusty added another goal assisted by Aidyn Bennett in the 51st minute joining Miller and Delk with a brace of his own. The Tigers sealed their berth in the championship match with a 9-0 victory off a strong performance on both ends of the pitch. Bennett and Mat Delk combined for the clean sheet in goal.

The tournament championship match was originally scheduled for 1:30 p.m. Saturday but was moved up to 9 a.m. to avoid expected storms in the area. The Tigers traveled early again to participate in their fourth match in less than 48 hours.

This rematch with the host Pittsburg Pirates provided a rare chance for redemption for the Pirates. For the Tigers it gave a chance to show they deserved the prior victory.

The early start did not hinder the Tiger offense as they continued the scoring pace they had set the night before when Austin Miller scored in the 8th minute on a pass from Alijah Garza. Garza scored a solo goal a minute later. Just 12 minutes into the match the Tigers held a 3-0 lead against the same Pirate side they had struggled to find the net against the day before. The third goal was scored by Sam Tettamanti which was assisted by Miller.

Pittsburg added some doubt as to the outcome when they scored a goal of their own in the 18th minute. This concluded the scoring for the first half.

Coach Zak McCarthy rested Miller to start the second half, opting instead to play freshman Francisco Perez at the striker position. Perez rewarded the coach's decision with a goal 10 minutes into the half. Nine minutes later the Tigers youth wave paid off again when freshman Frank Delk threaded the Pirate defense with a pass to Perez for Perez' second goal of the match.

When asked about the success of the veteran players in the first half and the youth in the second half, Coach McCarthy explained that both groups were essential to the team's success.

"The seniors are reaping the benefits of not only years of hard work and commitment but perseverance," he said, adding that the freshman "are delivering above and beyond and have brought in such a great energy to the group!"

He said the team is benefiting from the leadership and guidance of the veteran players.

"They are lucky to have such an outstanding group of seniors to look up to," he said, then qualified it a bid, saying "we are big on team and not individuals and we continue to show our unity throughout our games and that's something I'm most proud of!"

The two tournament victories against Pittsburg were significant, as the Tigers, more often than not, have come up short against the Pirates.

"I'm so proud we could get over this hurdle and win it this year," McCarthy said. "It was more than deserved."

(The Tiger boys continue their pre-district schedule next week with a tournament in Denison, Texas.)