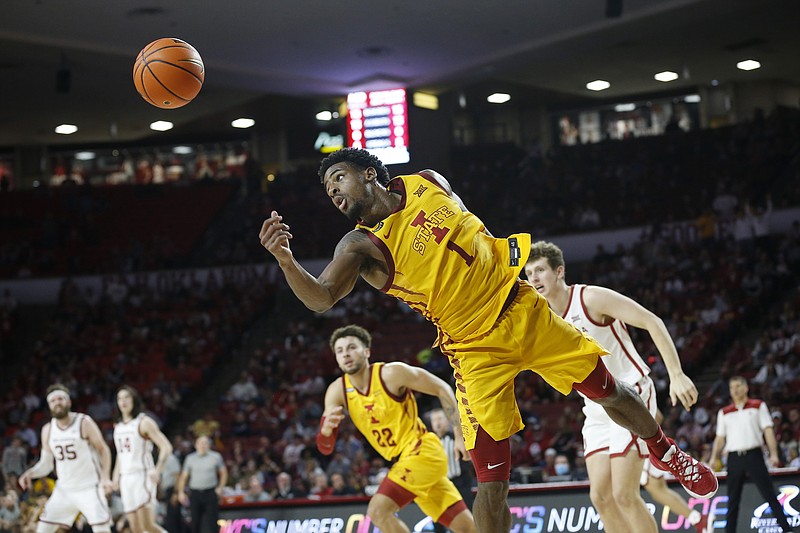 Iowa State guard Izaiah Brockington (1) lunges for a rebound during the second half of an NCAA college basketball game against Oklahoma, Saturday, Jan. 8, 2022, in Norman, Okla. (AP Photo/Garett Fisbeck)

Nothing looks like it will be easy offensively in the Big 12.

The conference is one of three in the country with five ranked teams, including unbeaten reigning national champion Baylor. And half the league ranks among the top defensive units in KenPom's statistical analysis to start a week that will include three ranked-vs-ranked matchups to headline the AP Top 25 schedule.

"Right now the identity is it's really good defensively across the board," Iowa State coach T.J. Otzelberger said. "It's really a challenge to score on the road, so you've got to make sure you're doing everything with intent and physicality from start to finish."

Otzelberger's 15th-ranked Cyclones visit No. 9 Kansas on Tuesday, while the top-ranked Bears carry a 21-game winning streak into their home game with No. 19 Texas Tech that night. And on Saturday, Iowa State hosts No. 21 Texas.

As of Monday, five Big 12 teams ranked in the top 12 of KenPom's adjusted defensive efficiency metric, with the Red Raiders (89 points allowed per 100 possessions) leading the way at fifth. Iowa State was next at sixth (89.1), followed by Baylor seventh (89.6) -- with the Bears standing as the nation's only team ranking in the top 10 on the offensive side as well.

And the Big 12 is comfortably on top of KenPom's conference rankings this season.

"If you're able to go on the road in these environments, face these teams and get a win, you're doing something really right," Baylor coach Scott Drew said after the weekend win at TCU.

The Southeastern Conference, which also had five teams in Monday's new poll, has its own matchups of ranked teams this week.

Fourth-ranked Auburn visits No. 24 Alabama on Tuesday in meeting of instate rivals, while No. 18 Kentucky hosts No. 22 Tennessee on Saturday after both teams lost to No. 12 LSU last week.

Baylor and No. 5 Southern California are the last unbeaten teams in Division I men's basketball. Both have two games this week to stay there.

The Bears follow Tuesday's matchup with Texas Tech with Saturday's home game against Oklahoma State. If they win both, they'll tie the Big 12 record of 23 straight wins set by the Bears in 2019-20.

The Trojans, who on Monday rose to their highest ranking since December 1974, visit Stanford on Tuesday then host Oregon State on Thursday.

Illinois has been rolling along since a stumble to start the season. That has the Illini back in the AP Top 25.

Illinois opened the season at No. 11 but fell out of the poll amid a 2-2 start before the end of November. But they returned to the rankings Monday at No. 25 and play Tuesday at Nebraska before hosting Michigan on Friday.

For the second straight week, Oklahoma sits just outside the poll. Now Loyola Chicago and Miami are hovering there, too.

Oklahoma (12-3) lost to Baylor last week but beat Iowa State over the weekend. The Sooners have an immediate chance to follow that with another big win under first-year coach Porter Moser when they visit the Longhorns on Tuesday. They also visit TCU on Saturday.

Then there are the Hurricanes, who many expected would land in Monday's new poll after winning at No. 2 Duke's Cameron Indoor Stadium on Saturday night. Miami (13-3) has won nine straight games and sits at 5-0 in the Atlantic Coast Conference entering Tuesday's trip to Florida State. 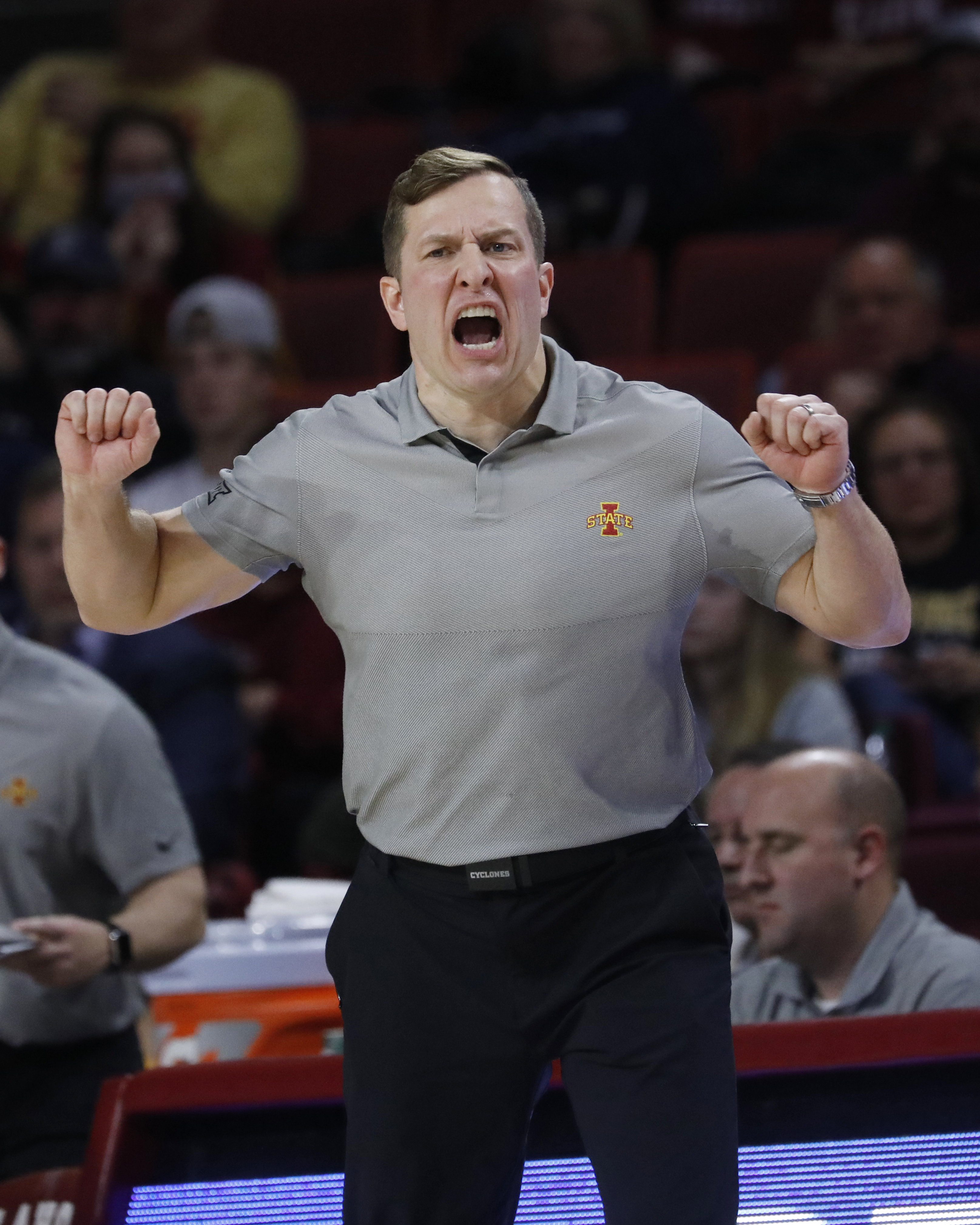 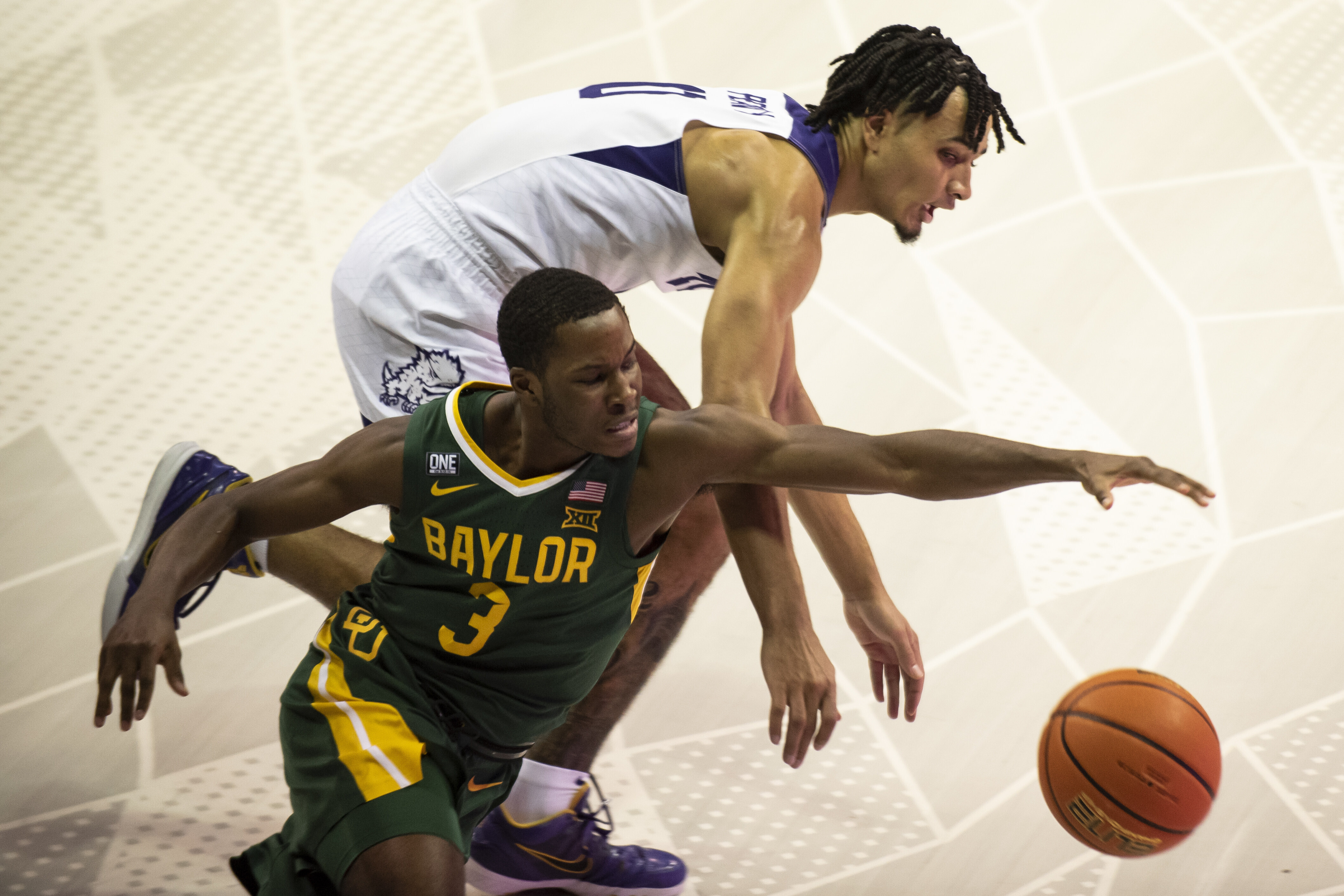 Baylor guard Dale Bonner (3) reaches for the ball past TCU guard Micah Peavy (0) in the second half of an NCAA college basketball game in Fort Worth, Texas, Saturday, Jan. 8, 2022. (AP Photo/Emil Lippe) 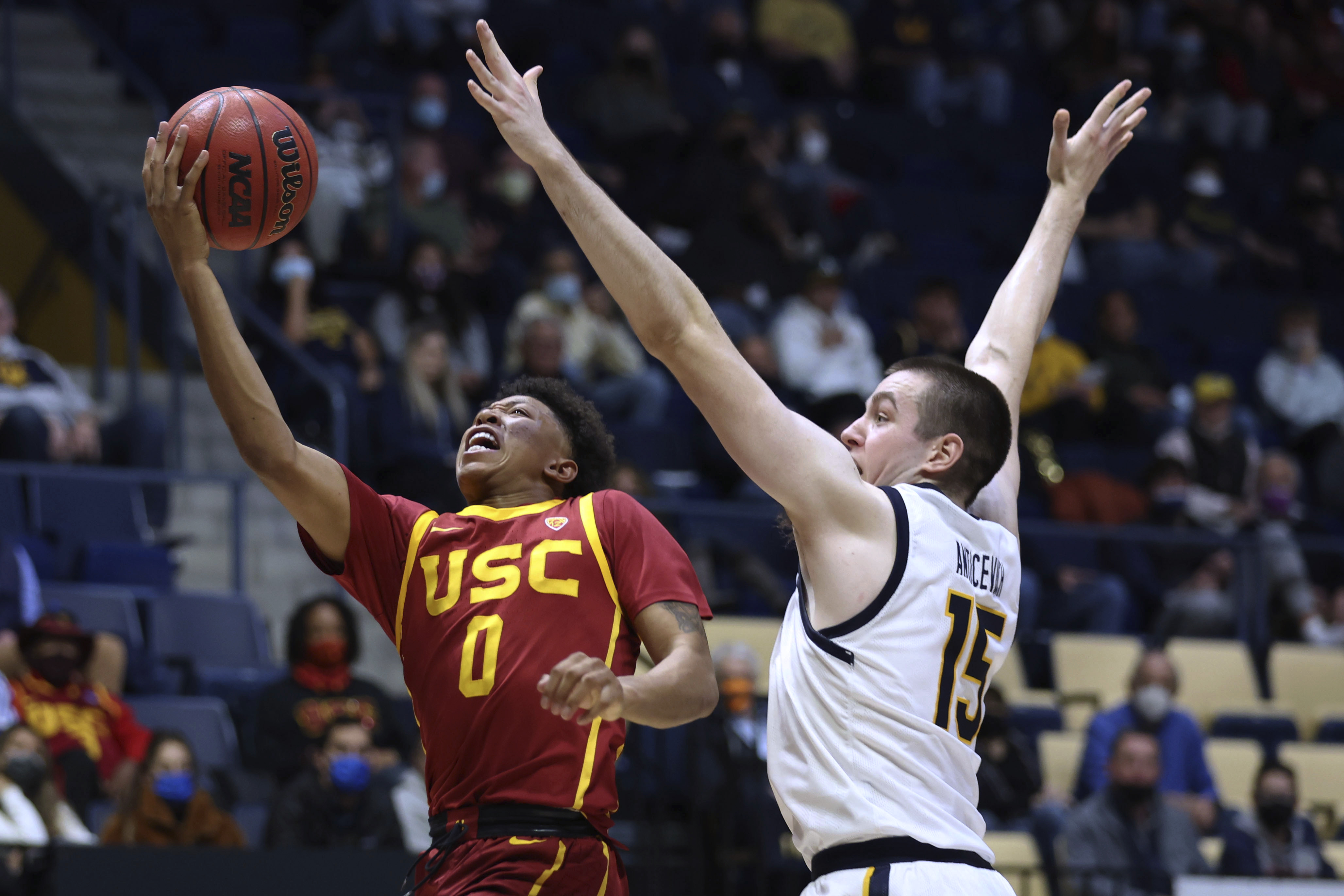 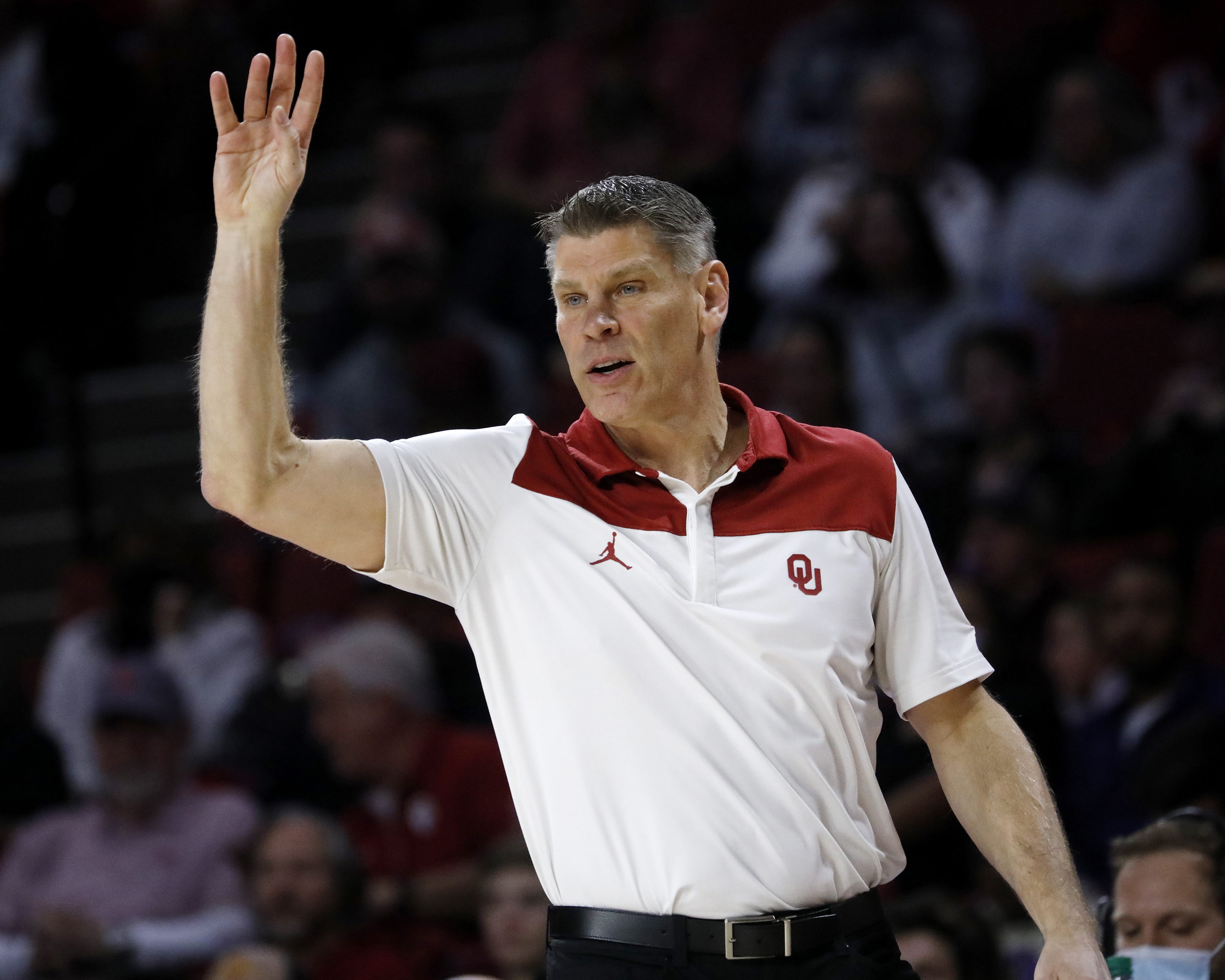 Oklahoma head coach Porter Moser signals to his players during the first half of an NCAA college basketball game against Iowa State, Saturday, Jan. 8, 2022, in Norman, Okla. (AP Photo/Garett Fisbeck) 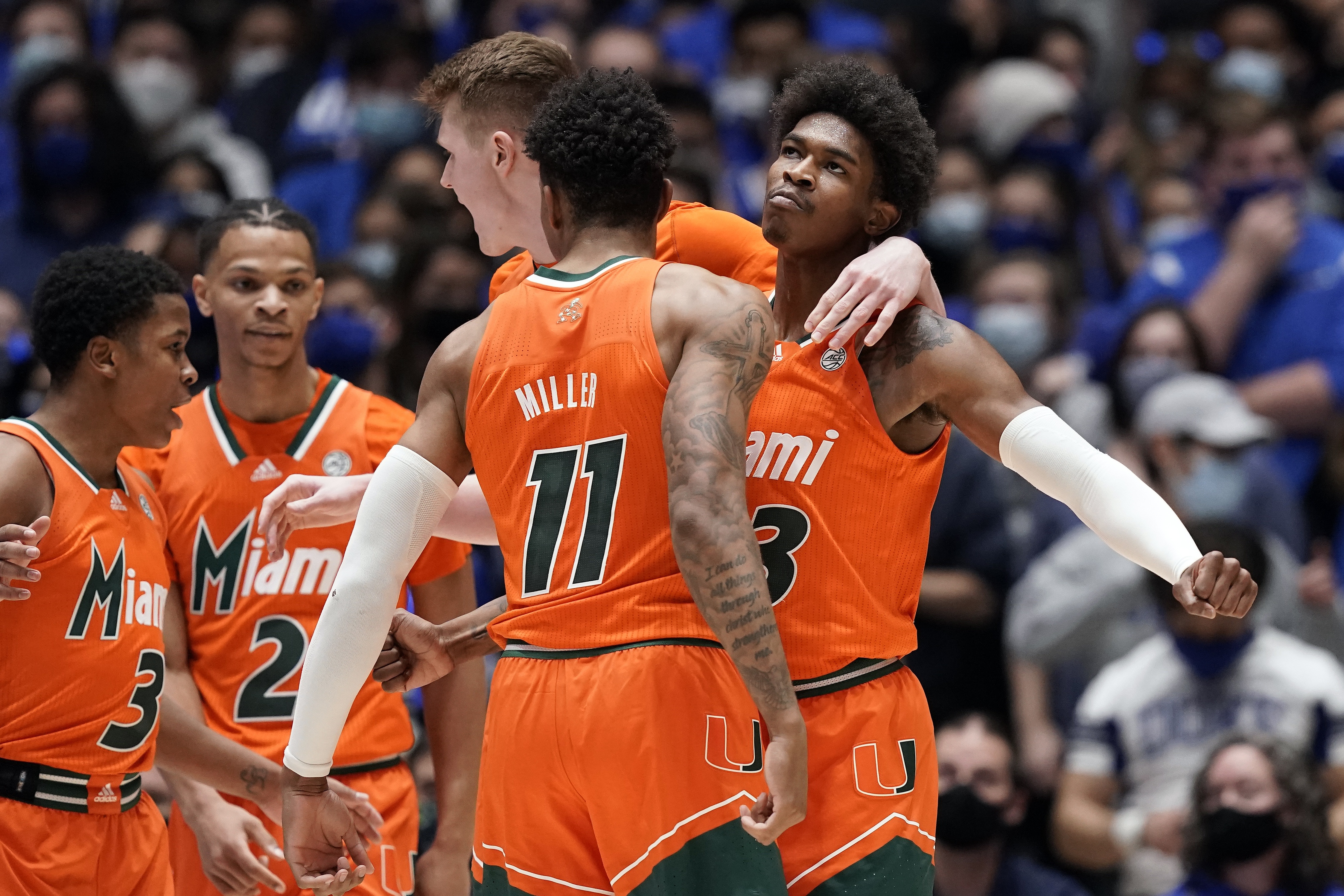 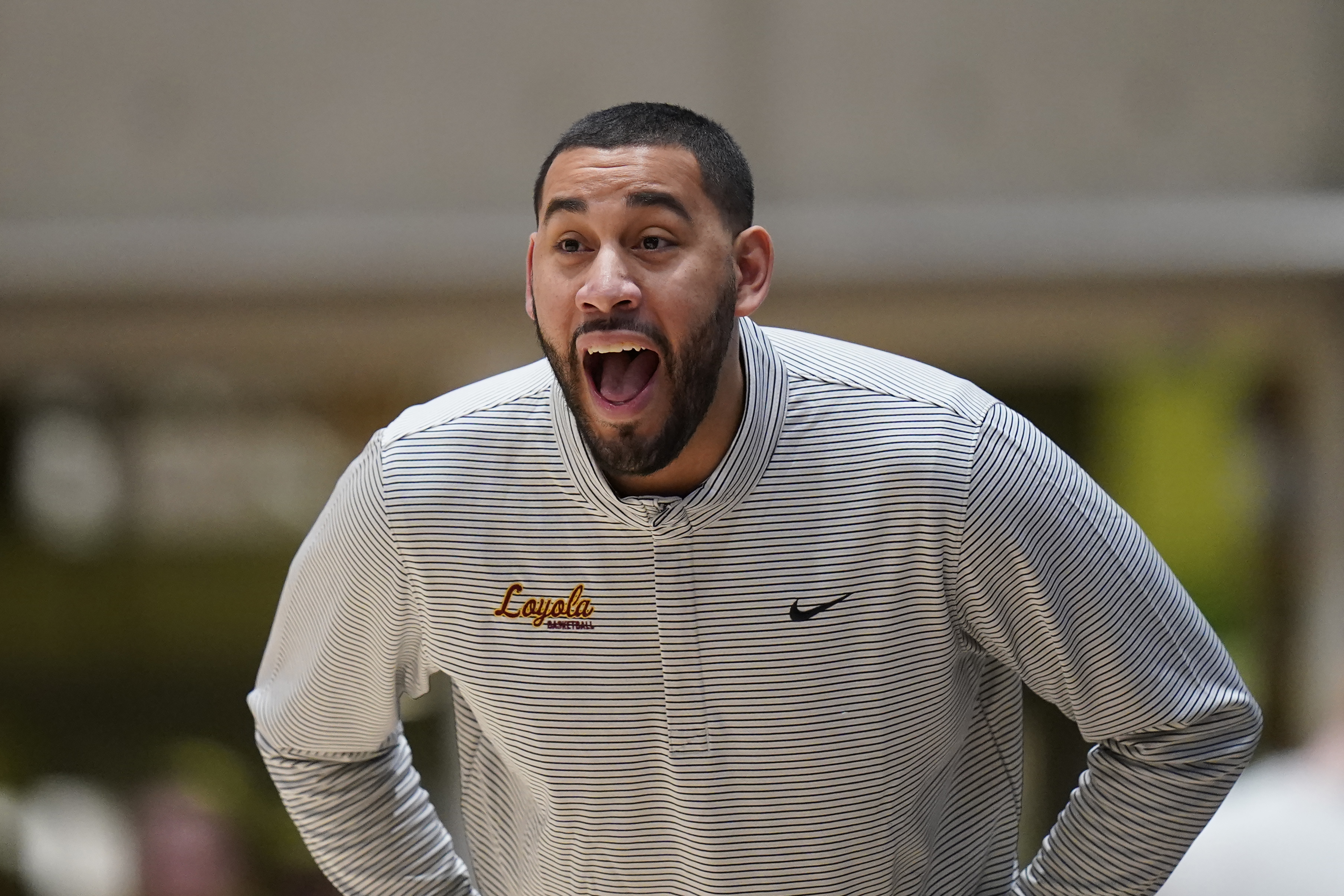