Learn the art of conversation at the barber shop 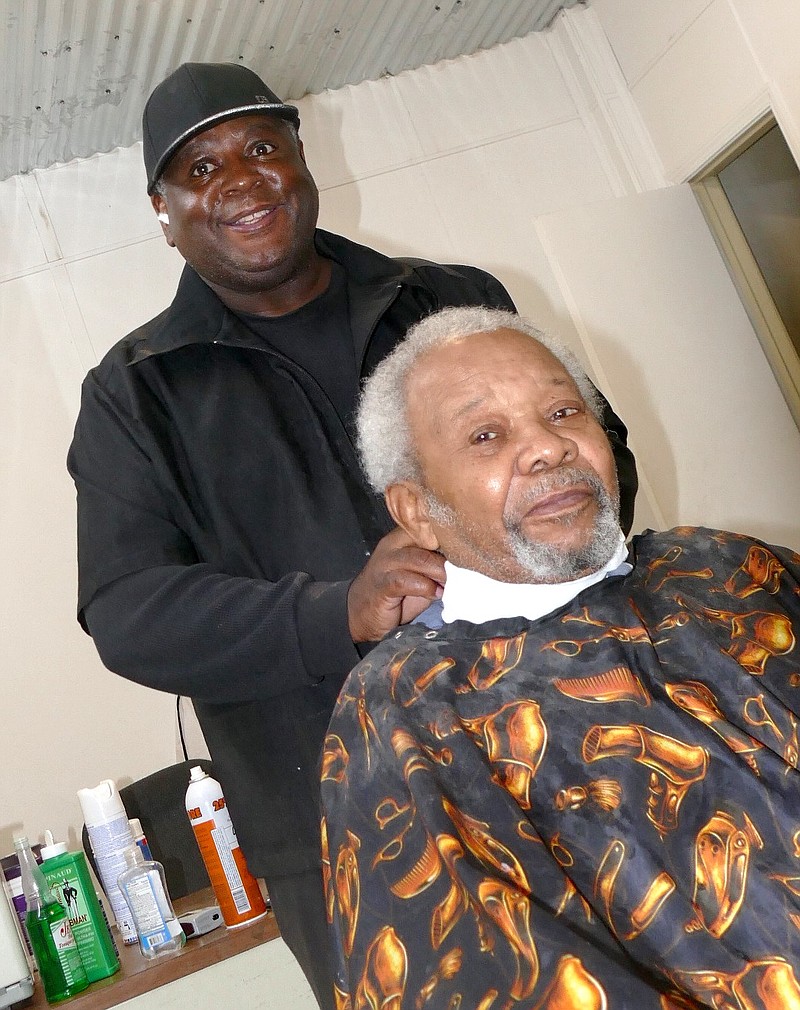 Barber David Williams prepares to give a haircut to customer Eddie Whitmore in his shop in Linden, Texas. (Photo by Neil Abeles)

The art of conversation needs practice. The question is where can this be done?

One answer is the local barber shop. Remember Floyd, the barber from "The Andy Griffith Show"? His visitors dropped in mainly to chat. Merely chat because Floyd was a little absent-minded. But, still, he got to practice.

In Linden currently, one has a choice of three barber shops. These are the locations of barbers Curtis Hunt, Theodore Webster and David Williams. Each shopfront is on, or just off, the town square.

A barber shop will not have much advertising, and one does not need to know the barber's name or he yours. The point is to just slowly open the door and slide in. You'll be greeted by nearly everyone there.

Next, the barber will talk to you. This is especially true if your are visiting David Williams at 105 East Rush St. David's a master at conversation because he's truly interested in you. It is, he says, his philosophy of doing business.

"That's what the good book says. Love another. Doesn't it? Am I right?" Williams says as he looks at you and awaits an answer.

Now the rules of barber shop conversation, which David follows, are these:

n The first thing is not to be serious. There's enough seriousness in the world, so lighten up at the shop.

n The second is to be politely fearless. Speak to anyone. They are, after all, at a barber shop.

n Of course, avoid controversy. Everyone has an opinion.

n Importantly, smile, tell a story, ask a question or make a general complimentary comment. And let the barber lead because he's a professional at conversation.

n Finally, say a nice goodbye when you leave. Imagine everyone will think well of you as you pass by, facing the sunshine and looking your best. That dance is called the "Barber Shop Rock." Over in Curtis Hunt's barbershop, he has a sign which says, "This is a business in which you look better leaving than when you came in."

David Williams does all these things. Give him a chance by dropping by and you'll see.

Here's his background. He has as degree from Southern Arkansas University and has worked in both Atlanta and Linden hospitals as well as having been a hospice bereavement counselor. So he knows about communication.

"Barbering is so much more than just cutting hair," Williams begins. "It's about treating the customer right. That's putting the drapery on the customer in just a certain way, adjusting the cloth on the neck. It's an art, a skill and a trade. I call it free enterprise, too. So I'm happy. I'm glad I'm here."

And he adds a word about business.

"As a business, it's all about communication. Not about competition. Now, if you like your haircut, tell someone else. If you don't, tell me."

Williams grew up in Haynesville, Louisiana. After college and work experience, he thought one day about barbering. He paid his $400 to start enrollment at barber school, finished and then came to Linden in 2016.

Curtis Hunt, another barber in town who's been here longest, has been a patriarch for the more recent barbers and given them lots of good advice, Williams said.

And with that thought, barber Williams finished one customer's hair cut and collected $12.

Williams cuts hair at his shop Thursdays through Saturdays.

"Got to like your work. If you do, it's really not working," he concluded, getting ready to greet another customer.

Print Headline: Learn the art of conversation at the barber shop