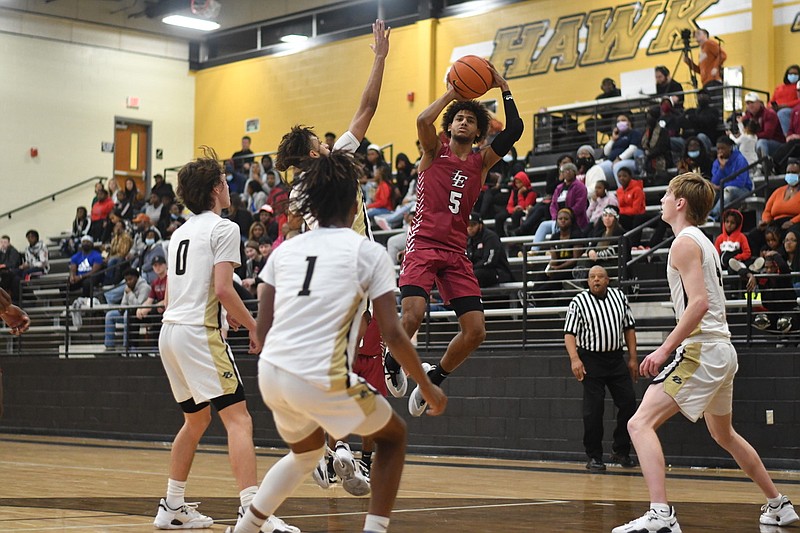 Photo by Kevin Sutton Liberty-Eylau’s Jaykwon Roberts (5) goes up for a jump shot as Pleasant Grove’s Kennon Kelley defends in a District 15-4A boys varsity basketball game at Hawk Gym on Tuesday. The Leopards won the opener, 66-54.

TEXARKANA, Texas -- Liberty-Eylau's press forced 31 Pleasant Grove turnovers, and the Leopards defeated the Hawks, 66-54, in A District 15-4A opener for both teams at Hawk Gym on Tuesday.

"I think we did a really good job," Liberty-Eylau (17-4, 1-0) head coach Billy Brewer said. "We made some mental mistakes toward the end, but overall we did a great job. They surprised us with their press and that hurt us. I was proud of them. We worked our press and got a lot of turnovers. We have been working hard all year with it, and I think it's going to take us pretty far."

Four Leopard players scored in double digits. Tracy Revels had a double-double with 12 points and 13 rebounds, Jaykwon Roberts scored 12 points, and Chris Lewis and Shawn White each had 11.

"Liberty-Eylau had good 3/4-court pressure, and did not do a good job of getting organized at times," Hawks' head coach Craig Collvins said. "We threw it away at times. Against teams that press, we have to attack them to try to get them to back off.

"We were down 20 points at one point, we got our pressure going and turned things around. We got some buckets. We are still in the process of building. We got to within 10 points and had them rattled for a little bit. We just didn't finish it."

Kennon Kelley had a double-double for the Hawks with 15 pints and 14 rebounds, Torion Phillips ripped the nets for 15 points and Cohen Cade scored 10.

White scored all of Liberty-Eylau's points in the middle of the third on a traditional 3-point play and a total of 3 layups as the Leopards grabbed a 41-26 advantage. L-E went on a 10-2 run to end the third and took a 20-point lead into the fourth quarter.

Phillips swished in two free throws which marked the start of a 12-2 Pleasant Grove run early in the fourth. The run cut the Leopard lead down to 10, 57-47. L-E worked the ball down inside during the final stretch of the game for close-range field goals.

Phillips made a layup, was foul and sunk his charity shot to bring Pleasant Grove to within 8, 17-9, early in the second. Roberts and Keeunue Shepard each hit a trey to pad the Leopards' lead, 25-13, later in the second.

Liberty-Eylau went on a 7-0 rally late in the second to go up by 16 points, and the Hawks' Cade sank a triple at the end of the second to make it a 13-point affair.

The Leopards went into the locker room at the half with a 34-21 lead. After a brief tie at 2-all in the first quarter, L-E went on a 9-0 run to grab an 11-2 edge. Jaydin Hampton nailed a shot from 3-point land, Greg London hit a layup, Pharrell Thurman sunk a jumper and Roberts went in for a layup during the spurt.

Cade ended the run with a traditional 3-point play on a putback for the Hawks. L-E was up, 17-7, after the first quarter.