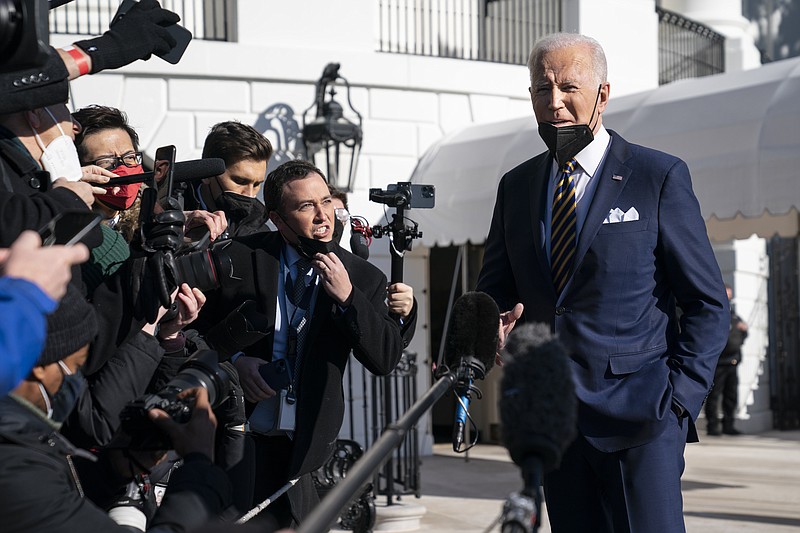 President Joe Biden talks to reporters before boarding Marine One on the South Lawn of the White House, Tuesday, Jan. 11, 2022, in Washington. The Biden administration is increasing federal support for COVID-19 testing for schools in a bid to keep them open amid the omicron surge. The White House said Wednesday the administration is making a dedicated stream of 5 million rapid tests and 5 million lab-based PCR tests available to schools starting this month. (AP Photo/Evan Vucci)

WASHINGTON -- The Biden administration is redoubling its efforts to expand supply and accessibility of COVID-19 testing as it faces mounting criticism over long lines and supply shortages for testing nationwide and confusion about when to get tested amid the omicron surge.

The White House announced Wednesday that a dedicated stream of 5 million rapid tests and 5 million lab-based PCR tests will be made available to schools starting this month to ease supply shortages and promote the safe reopening of schools.

It said Dr. Tom Inglesby, director of the Johns Hopkins Center for Health Security at the Bloomberg School of Public Health, will join the COVID-19 team to oversee the enhanced testing push. The moves come just days before private insurers will be required to reimburse Americans for tests and the launch of a new federal website for Americans to order free tests to be shipped to their doors.

The test supply push, though, will likely be too late for many Americans trying to safely navigate the omicron-fueled case surge, which is already showing signs of cresting.

Dr. Rochelle Walensky, the director of the Centers for Disease Control and Prevention, on Wednesday offered guidance for when Americans should use tests -- which were in short supply as Americans traveled and saw family during the busy holiday season.

"Americans should take a test when they have symptoms that appear to be COVID-19," she said, including fever, cough, sore throat, respiratory symptoms and muscle aches. She also said they should test after known exposure to the virus, generally five days after being exposed, or earlier as part of test-to-stay protocols in schools and workplaces.

"Certainly if you're going to gather with family, if you're going to a gathering where people are immunocompromised or where they're elderly or where you have people who might be unvaccinated or poorly protected from a vaccine that might be an opportunity you want to test," she added.

The school testing initiative announced Wednesday comes after the nation's third-largest public school system, in Chicago, closed for days after an impasse between teachers and officials over reopening policies. The closure was a black eye for President Joe Biden, who made reopening schools -- and keeping them open -- a priority.

Education Secretary Miguel Cardona said students need to be in their classrooms and the announcement shows the administration's commitment to helping schools stay open.

"We're doing everything we can to make sure that our children have an opportunity to stay in school," Cardona said Wednesday on "CBS Mornings." "That's where they need to be, and we know we can do it safely."

States are applying to the Centers for Disease Control and Prevention for the tests, Cardona said, adding that he expected distribution to begin as early as next week.

"We recognize that schools are the hubs of the community" and they should be open for instruction, the secretary added, saying it is "vital for our students."

"We have been very clear, publicly and privately, that we want to see schools open," White House press secretary Jen Psaki said Monday. She cited the massive amount of funding for schools as evidence of the administration ensuring "we were prepared and had resources needed to address whatever may come up in the pandemic."

The new crop of tests is enough to cover only a small fraction of the more than 50 million students and educators in the nation's schools, but it's on top of more than $10 billion devoted to school-based tests authorized in the COVID-19 relief law and about $130 billion earmarked in that law to keep kids in school.

The administration hopes the tests will fill critical shortfalls in schools that are having difficulty securing tests through existing federal funding or are facing outbreaks of the more transmissible COVID-19 variant.

"Today's commitment is a major step forward in enabling school districts who have struggled to secure the tests teachers and staff rely on to see what's unseen," said Randi Weingarten, the president of the American Federation of Teachers.

Additionally, the CDC is set to release new guidance later this week to help schools implement "test-to-stay" policies, in which schools use rapid tests to keep close contacts of those who test positive in the classroom. 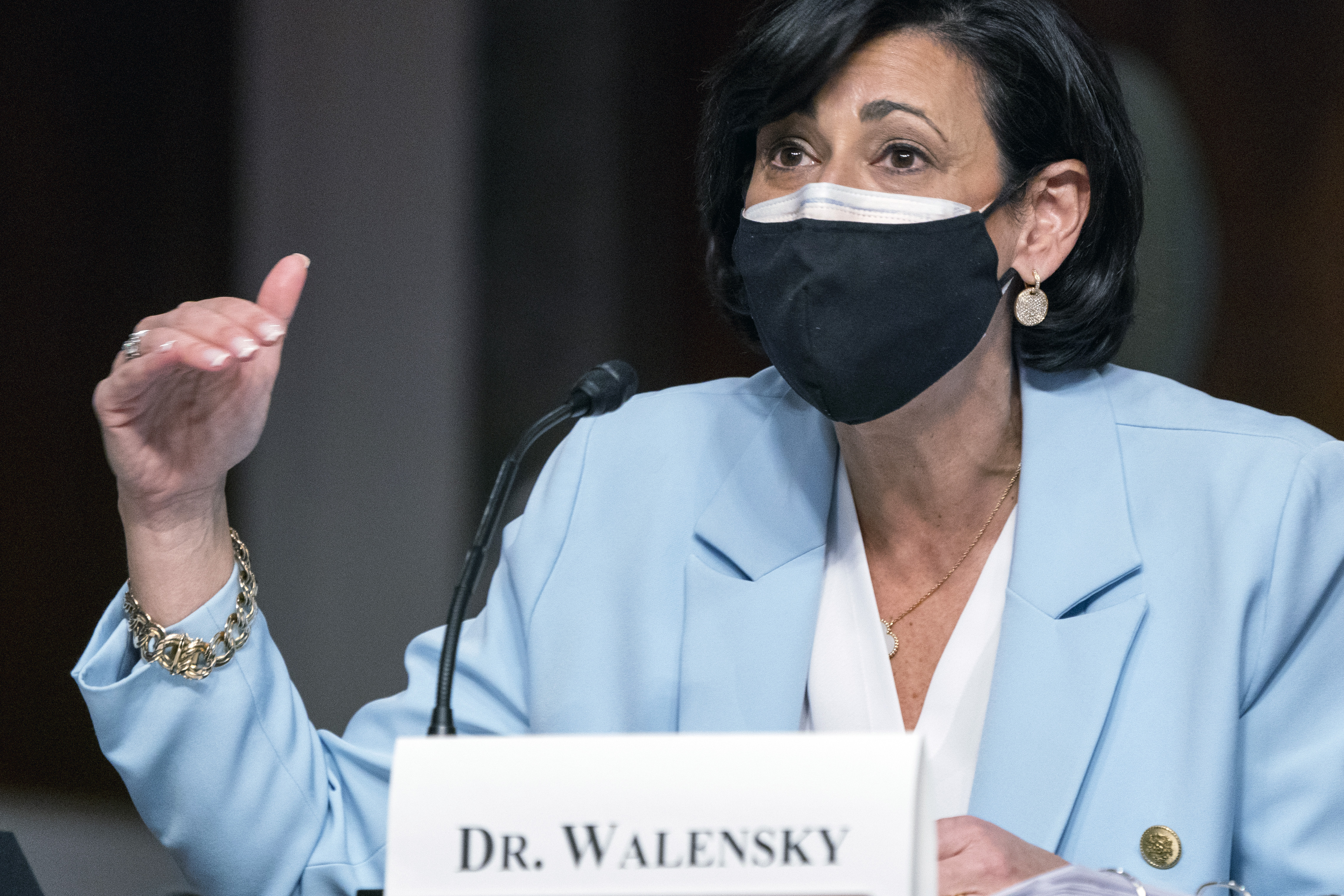 Dr. Rochelle Walensky, Director of the Centers for Disease Control and Prevention, testifies before a Senate Health, Education, Labor, and Pensions Committee hearing to examine the federal response to COVID-19 and new emerging variants, Tuesday, Jan. 11, 2022 on Capitol Hill in Washington. (Shawn Thew/Pool via AP) 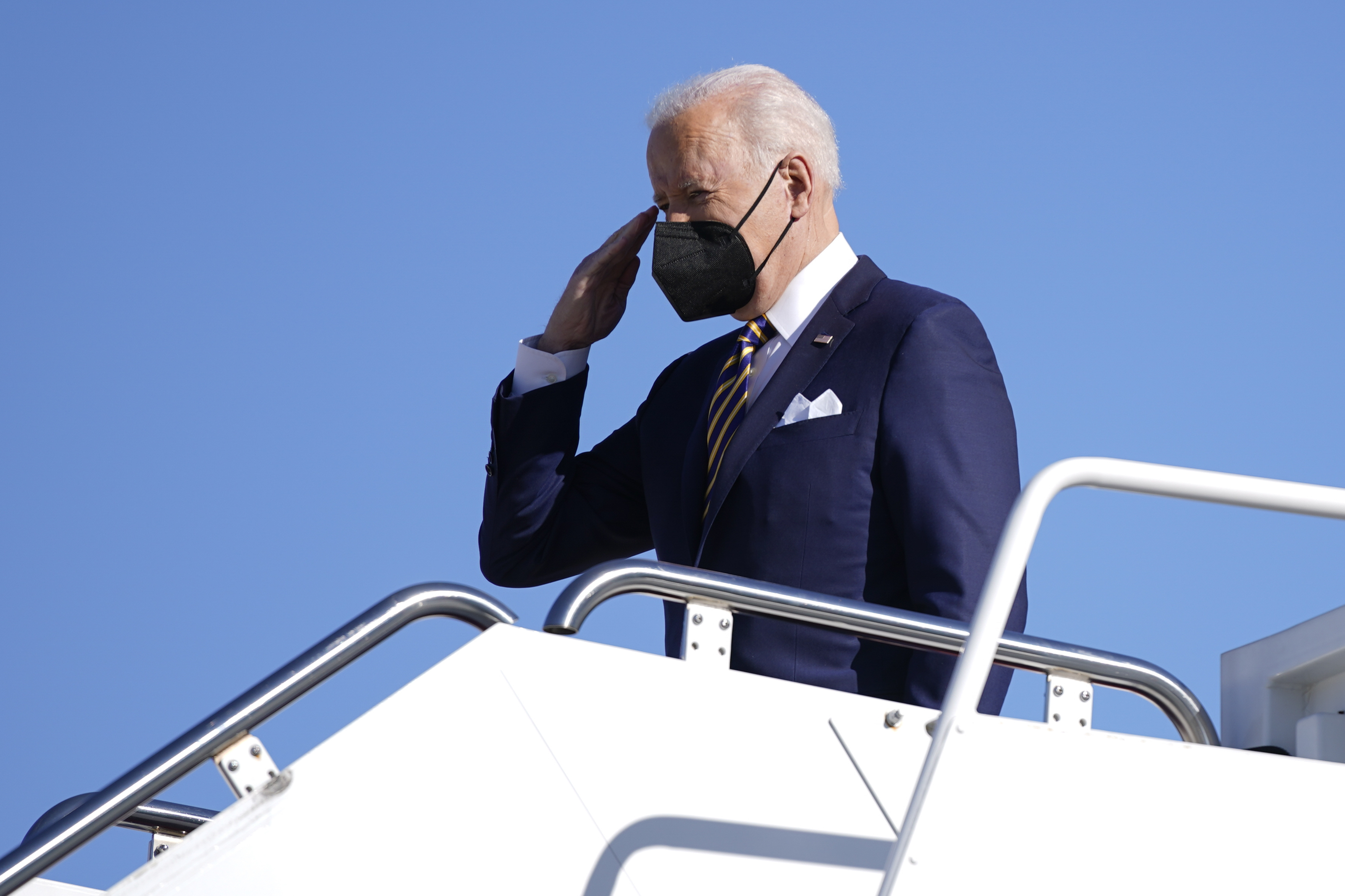 President Joe Biden salutes as he boards Air Force One, Tuesday, Jan. 11, 2022, at Andrews Air Force Base, Md. Biden is en route to Atlanta. The Biden administration is increasing federal support for COVID-19 testing for schools in a bid to keep them open amid the omicron surge. The White House said Wednesday the administration is making a dedicated stream of 5 million rapid tests and 5 million lab-based PCR tests available to schools starting this month. (AP Photo/Patrick Semansky)