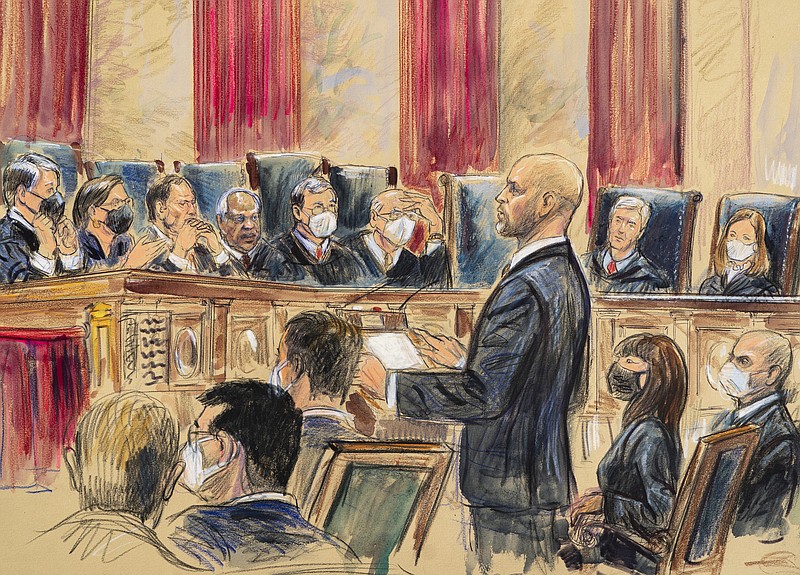 FILE - This artist sketch depicts lawyer Scott Keller standing to argue on behalf of more than two dozen business groups seeking an immediate order from the Supreme Court to halt a Biden administration order to impose a vaccine-or-testing requirement on the nation's large employers during the COVID-19 pandemic, at the Supreme Court in Washington, Jan. 7, 2022. The Supreme Court has stopped the Biden administration from enforcing a requirement that employees at large businesses be vaccinated against COVID-19 or undergo weekly testing and wear a mask on the job. (Dana Verkouteren via AP, File)

WASHINGTON -- The Supreme Court on Thursday stopped the Biden administration's vaccination-or-testing requirement on the nation's largest employers, expressing doubt that there is legal authority for such a broad mandate.

But the court allowed a different policy, which requires vaccinations for most health-care workers at the facilities that receive Medicaid and Medicare funds.

Chief Justice John Roberts and Justice Brett Kavanaugh were the only members of the court in the majority of both orders. Essentially, they found Congress had given federal agencies the power to impose the requirement on health-care workers at facilities receiving federal funds, but that there was no authority to impose sweeping requirements in workplaces across the nation.

The White House said the order covered about 17 million health-care workers, while the requirement on large companies would have covered more than 80 million employees, about two-thirds of the American workforce.

The administration had argued both were needed to push Americans to get vaccinated against covid-19.

In its unsigned order blocking the workplace rules, which had been devised by the Occupational Safety and Health Administration (OSHA), the court said that although the risks associated with coronavirus occur in many workplaces, "it is not an occupational hazard in most."

"COVID-19 can and does spread at home, in schools, during sporting events, and everywhere else that people gather. That kind of universal risk is no different from the day-to-day dangers that all face from crime, air pollution, or any number of communicable diseases," the order says. "Permitting OSHA to regulate the hazards of daily life - simply because most Americans have jobs and face those same risks while on the clock - would significantly expand OSHA's regulatory authority without clear congressional authorization."

In their dissent, the court's three liberal justices, said the majority's decision would hinder the federal government's ability to counter "the unparalleled threat" American workers face.

"Acting outside of its competence and without legal basis, the Court displaces the judgments of the Government officials given the responsibility to respond to workplace health emergencies," Breyer, Kagan and Sotomayor wrote.

Lower courts were split on the ability of federal agencies to impose such requirements. The Supreme Court on Friday held a highly unusual oral argument on the policies, lasting more than 3 1/2 hours.

Businesses and 27 Republican-led states asked the court to put on hold the workplace requirements proposed by OSHA, which had been upheld by a lower court.

The Biden administration asked that the requirements for health-care workers, which courts had put on hold for about half the states, be allowed to move forward.

The majority of justices who supported allowing that mandate to take effect said in an unsigned order that the secretary of health and human services was allowed to take unprecedented action. "Of course, they wrote, "the vaccine mandate goes further than what the Secretary has done in the past to implement infection control. But he has never had to address an infection problem of this scale and scope before. In any event, there can be no doubt that addressing infection problems in Medicare and Medicaid facilities is what he does."

Thomas dissented, saying Congress did not expressly authorize the power to require vaccinations. "These cases are not about the efficacy or importance of COVID-19 vaccines. They are only about whether [the Centers for Medicare and Medicaid Services] has the statutory authority to force healthcare workers, by coercing their employers, to undergo a medical procedure they do not want and cannot undo," he wrote, joined by Alito, Gorsuch and Barrett.

In weighing previous challenges to coronavirus restrictions and requirements, the court has been largely deferential to state responses to the pandemic - but skeptical of the powers of federal agencies.

That seemed to be the case Friday when court considered the OSHA rule.

Federal law grants OSHA authority to issue emergency rules for up to six months to protect employees "exposed to grave danger" from "substances or agents determined to be toxic or physically harmful or from new hazards." The administration said that gives OSHA not only the authority but also the responsibility to act.

The temporary rule would have given companies with 100 or more workers a choice: mandate all employees be vaccinated or require unvaccinated employees to provide weekly negative coronavirus test results and wear face coverings to work on-site.

The rules were set to take effect Jan. 4, but OSHA pushed back the date in response to the litigation and said it would not immediately issue citations for those not in compliance.

Soon after the administration announced the rules for private companies in November, the U.S. Court of Appeals for the 5th Circuit blocked enforcement of the policy.

But lawsuits emerged around the nation and were consolidated for review by a different court. A panel of the U.S. Court of Appeals for the 6th Circuit dissolved the 5th Circuit's stay, saying the rules could go into effect.

The other challenged policy was a vaccination requirement for what the White House says is more than 17 million health-care workers at 76,000 facilities that receive federal money tied to Medicare and Medicaid.

The administration has pointed to federal law that gives the secretary of the Department of Health and Human Services the ability to impose requirements necessary for the "health and safety" of patients. For decades, it says, the secretary has had authority to require participating health-care providers to establish programs for the prevention and control of infectious diseases within the facilities.

The states challenging the policy said the federal government did not have such coercive powers over the states. As a practical matter, they said, worker opposition to the vaccine would cost the facilities skilled employees at the time they are most needed.

A panel of the U.S. Court of Appeals for the 11th Circuit dismissed a request from Florida to stop the requirement. But a district judge in Missouri stopped the rules, and the 5th Circuit agreed with a challenge from Louisiana.

Because of the uncertainty surrounding the litigation, OSHA announced that it would not penalize companies for not complying with employee testing requirements before Feb. 9, as long as employers show "reasonable, good faith efforts" to meet the standards.

In response to concerns about a shortage of health-care workers, the administration said the secretary of health and human services has given facilities some flexibility to meet the new requirements, including an additional 60 days to get employees fully vaccinated. The agency also said it will hold off on any enforcement action, as long as 90 percent of the workforce is vaccinated and the facility has a plan to immunize its remaining workers.

The Washington Post's Ann E. Marimow contributed to this story.