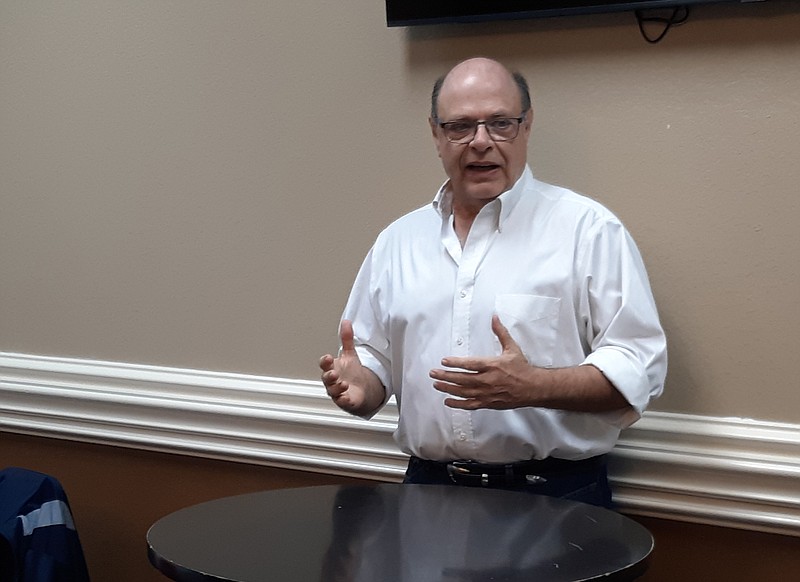 Local resident and former Texas State Rep. George Lavender stated his case before Bowie County Patriots on Thursday night. He is running for the District 1 representative of the Texas State House. The seat is currently held by Gary VanDeaver. (Staff photo by Junius Stone)

TEXARKANA, Texas -- Local resident and veteran policy-maker George Lavender met with Bowie County Patriots Thursday night to lay out his case for his candidacy for District 1 representative of the Texas State House.

He says that District 1 is not getting adequate representation from Gary VanDeaver and wishes to take his place. He notes the culture war and the policy faux pas that reflect this and he sees the nation, and sees the more conservative states under assault from Washington D.C.

"All this stuff is rolling downhill from Washington," he said. "We need to elect leaders at all levels to stand up against this."

He emphasized that Washington representation alone will not get this done. Locally, state-wide, concerned citizens must send good representatives to work at all levels.

"For example, local schools. Washington has made it very difficult to actually teach," he said. "Teachers are not allowed to teach anymore. Teachers are now pushed to teach to tests, rather than impart knowledge. Even Republicans are not innocent of such policies. Schools need the freedom to teach like they actually need to, to actually educate kids."

"They are terrible in Texas," he said. "It is unconscionable that we, in effect, rent our property from the State of Texas."

Lavender says that he wrote a bill in his last time in the legislature to deal with them.

Turning his attention back to schools, Lavender addressed the teaching profession.

"Right now, Texas teachers don't get social security," he said. "In fact, they pay into it throughout their careers, but don't get it upon retirement. That's not right. I think we can get this done for teachers."

On the abortion issue, Lavender cites his 100% record, according to various pro-life groups.

On guns, Lavender points out he has written open-carry legislation.

"Elect me as your representative in District 1, I will represent you all," he said. "Republican, Democrat, whomever."