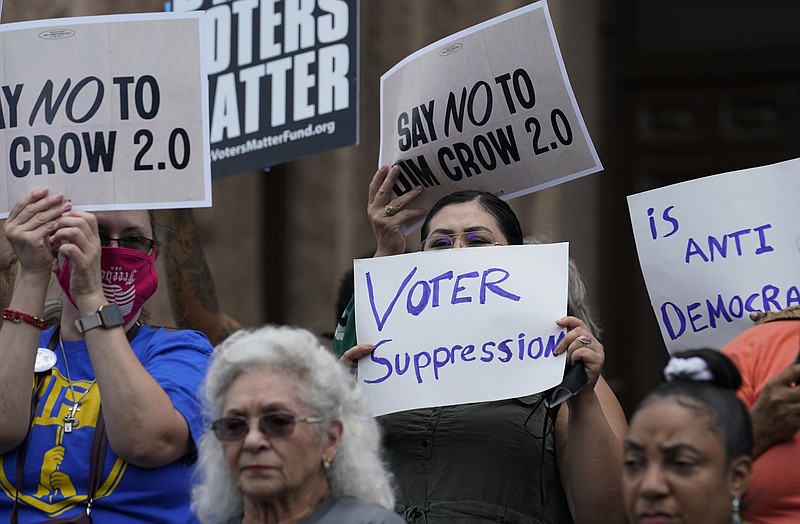 FILE - Demonstrators join a rally to protest proposed voting bills on the steps of the Texas Capitol on July 13, 2021, in Austin, Texas. A sweeping new Texas voting law that Republicans muscled through the Legislature last year over dramatic protests is drawing fire again, even before some of the most contentious restrictions and changes kick in ahead of the state's first-in-the nation primary. (AP Photo/Eric Gay, File)

AUSTIN -- A sweeping new Texas voting law that Republicans muscled through the Legislature last year over dramatic protests is drawing fire again, even before some of the most contentious restrictions and changes kick in ahead of the state's first-in-the nation primary.

Thousands of Texans -- including some U.S. citizens -- have received letters saying they have been flagged as potential noncitizens who could be kicked off voting rolls. And this week, local elections officials said hundreds of mail-in ballot applications are being rejected for not including required new information.

"It's just a bad situation on a number of levels," said James Slattery, an attorney with the Texas Civil Rights Project, one of several voting rights groups that has sued the state over the new law.

The Texas law was approved last year by Republicans, who joined their party colleagues in at least 18 states, including Florida, Georgia and Arizona, in enacting new voting restrictions since the 2020 election, according to the Brennan Center for Justice. The national GOP campaign to tighten voting laws has been partly driven by former President Donald Trump's false claims that he won the election, not President Joe Biden.

Democrats have strenuously objected -- including by walking out and to gridlock the Legislature, warning it could disenfranchise untold numbers of voters, especially Black, Latino and Asian people. Many of its provisions, such as expanded powers for partisan poll watchers, don't take effect until the election. But Democrats and civil rights groups say what has happened so far is alarming.

First, Texas sent letters to more than 11,000 voters warning them their registrations will be canceled unless they prove to their local elections office they are citizens. More than 2,000 registrations ended after the voters did not come in, according to the Texas Secretary of State's office. But some who received the warning letters were citizens.

Monty Tew, a 52-year-old who was born in Texas, said he couldn't understand why he got the letter asking him to prove his citizenship. He said he paid $30 to request a copy of his birth certificate, which he then sent the county a picture of as proof of citizenship and was soon notified the issue was resolved.

"I feel fortunate for that not to have been that big of a deal, it wasn't that burdensome," said Tew, of Round Rock, a city outside Austin. "But I can imagine how that can be a much bigger flogging for someone else perhaps, if they didn't have their hands on technology or if paying someone $30 to get something that was a waste of your time, money and effort could be a hassle."

Then this week, election administrators in some of Texas' largest counties, which are run by Democrats, began raising early alarms about hundreds of mail-in ballot applications they've had to reject for not complying with strict new provisions.

Tucked into the 76-page law is a new requirement that voter include either their driver's license number or the last four digits of their Social Security number on mail-in ballot applications, or the number of a state-issued identification.

Counties then match those numbers to their records before mailing an actual ballot. Texas already had some of the nation's most restrictive mail-in ballot rules, and was among only a handful of states that did not expand mail balloting in 2020 during the pandemic.

As of Friday, Harris County officials said they had rejected more than 200 of 1,200 applications from voters in the Houston area. In Austin, county election officials put the rate of rejections at roughly 50%.

"It's definitely a red flag," said Isabel Longoria, the Harris County elections administrator. "At this point, to be so low in the number of applications and have a 20 percent rejection rate for the primaries? It's really got me worried."

The Secretary of State's office said in a statement Friday that counties should check with it on how to properly reject mail ballots. It had previously said the letters warning voters they may lose their right to vote were sent as part of the implementation of the new voting law. That measure includes provisions setting out a procedure to comply with a settlement of a 2019 lawsuit settlement over the last time Texas had tried to weed out noncitizen voters and ended up threatening to revoke the registration of large numbers of U.S. citizens as well.

"Voters who do not provide proof of citizenship to their county voter registrar within 30 days of receiving the notice of examination will have their registration cancelled, with the opportunity to be reinstated if the voter later provides proof of citizenship, including at the polling place," said Sam Taylor, a spokesman for the office.

Of the 2,327 voters whose registration have been canceled through the procedure, 278 have been confirmed as noncitizens, Taylor said.

But civil rights groups say the state is not taking the correct steps to ensure U.S. citizens don't get caught in the process. The state is supposed to only flag people who identified as noncitizens on their driver's licenses after registering to vote. But it's also catching some like Harish Vyalla, 35, of Austin, who said he has voted in the county at least twice since becoming a US citizen in 2013.

"I had no concerns because I know I am a citizen with proper documentation, but I was surprised because nobody had asked me in the past," said Vyalla, adding it took about a month to preserve his right to vote. "The government should already have all these proofs and documents in hand."

Nina Perales, an attorney with the Mexican-American Legal Defense and Educational Fund, helped write the settlement of the 2019 case. She said state state officials are clearly not following it and are setting themselves up for another lawsuit.

Perales said Texas voters should brace for a potential rocky voting experience as the law's provisions fully kick in during the March 1 primary.

"Texans would be well-served to know their rights when they go to the polls, because I think there'll be confusion and doubt for a lot of voters," Perales said.

Riccardi reported from Denver. Coronado is a corps member for the Associated Press/Report for America Statehouse News Initiative. Report for America is a nonprofit national service program that places journalists in local newsrooms to report on undercovered issues. 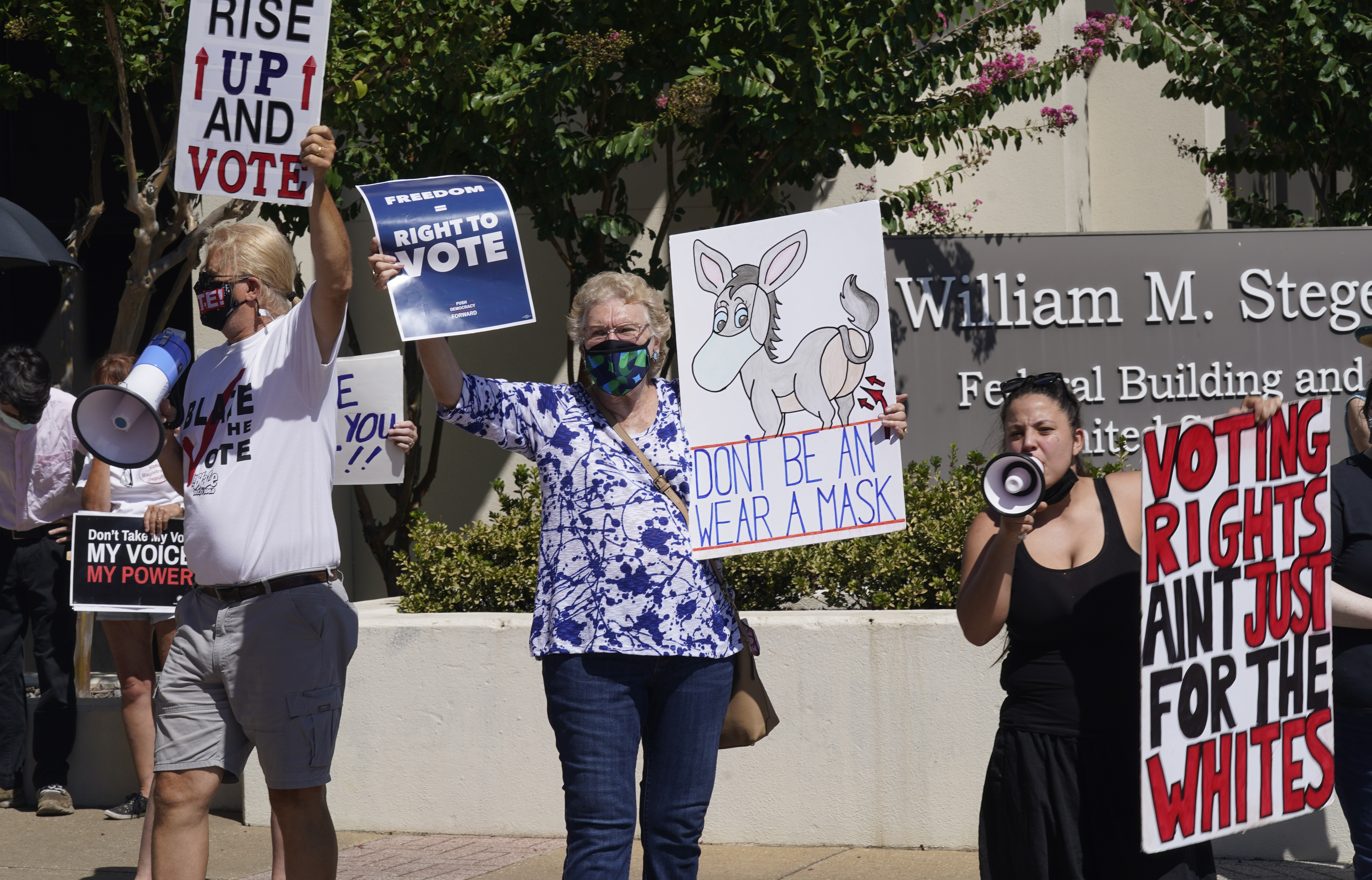 FILE - Protesters gather outside where Texas Governor Greg Abbott signed into law legislation that further tightens Texas' strict voting laws on Sept. 7, 2021 in Tyler, Texas. A sweeping new Texas voting law that Republicans muscled through the Legislature last year over dramatic protests is drawing fire again, even before some of the most contentious restrictions and changes kick in ahead of the state's first-in-the nation primary. AP Photo/LM Otero, File)