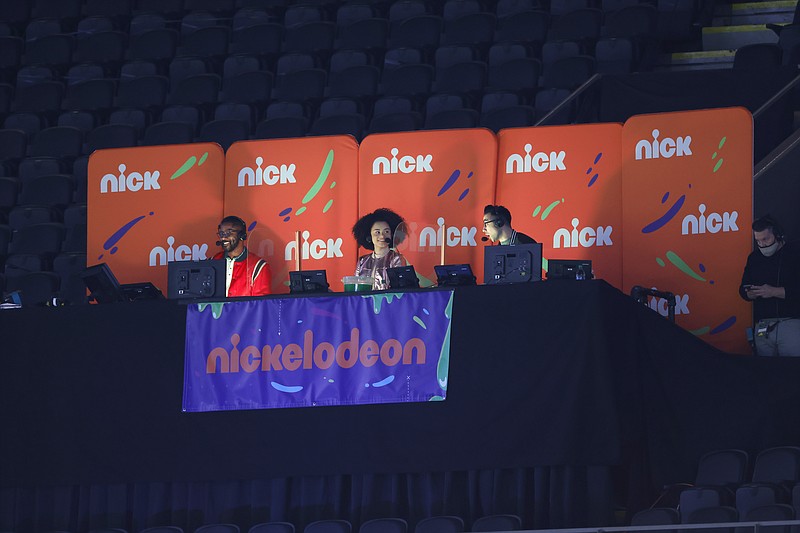 FILE - Nickelodeon commentators Nate Burleson, Gabrielle Nevaeh Green, and Noah Eagle are seen during an NFL wild-card playoff football between the New Orleans Saints and the Chicago Bears, Sunday, Jan. 10, 2021, in New Orleans. Nickelodeon is back again for the opening weekend of the NFL Playoffs this year with more slime and hoping to top last year's critically acclaimed broadcast. The network will do a kids-focused broadcast of the San Francisco 49ers-Dallas Cowboys game on Sunday. (AP Photo/Tyler Kaufman, File)

Encores are tougher to pull off after receiving overwhelming acclaim for trying something new.

However, Nickelodeon and CBS Sports feel as if Sunday's kids-focused broadcast of an NFL playoff game will be better than last year.

"I feel like it has been a year in the making. After the success of the last one, someone told me we would do another one at some point," said CBS Shawn Robbins, the coordinating producer. "It's one of those things that has been on your mind for 300-plus days, but now the day is coming up soon. So, it's pretty exciting."

After last year's success, the NFL gave Nickelodeon and CBS one of the top matchups of the weekend with the San Francisco 49ers (10-7) visiting the Dallas Cowboys (12-5).

"You couldn't ask for a better matchup. I mean, for the traditionalists, the history of these two franchises gets you excited," Nate Burleson said.

Last year's game -- New Orleans' 21-9 victory over Chicago -- was a success on all levels. Fans and critics loved how the three-person booth of Noah Eagle, Burleson and Gabrielle Nevaeh Green was able to make the game appeal to parents and kids. A younger age group learned the basics of the game, but parents could still focus on the action.

The game also averaged 30.65 million viewers, making it CBS' most-watched first-round game since 2014. The 2.06 million average for the kids-oriented broadcast on Nickelodeon made it the network's most-watched program in nearly four years.

Nickelodeon has also had a full year to prepare for the game. Their animators only had a test game before last year's live broadcast, but this season they have done a weekly series called "NFL Slimetime" that airs on Wednesdays. Nickelodeon and CBS also did a test game on Dec. 19 when San Francisco faced Atlanta.

Robbins said the animations have improved from last year and there will be more use of augmented reality graphics.

"We've upped the game at every level in the animation department. They are going to be so much more high end, the slime zone is going to look different. It's going to be an upgraded version of what you saw definitely the first time around," he said.

It also helps that Eagle, Burleson and Nevaeh Green are back in the booth. Eagle does radio play-by-play for the NBA's Los Angeles Clippers while Burleson is on "The NFL Today" and "CBS Mornings." The 16-year-old Green, who has starred on multiple Nickelodeon shows, drew lots of positive reviews for the way she was able to keep kids and parents engaged.

Another Nick star, Young Dylan of "Tyler Perry's Young Dylan" will be the sideline reporter after co-hosting "NFL Slimetime" with Burleson throughout the season.

The explanations of penalties from Iain Armitage of CBS' "Young Sheldon" will also return.

Of course, there will also be slime involved during the game. Besides the virtual slime cannons in the end zones, there will be a slime booth at AT&T Stadium on Sunday where Prescott or Garoppolo can get slimed if they are so inclined.

"With this playoff game, I feel like we are going to be dialed in. I think we're going to provide another great showing," Burleson said.