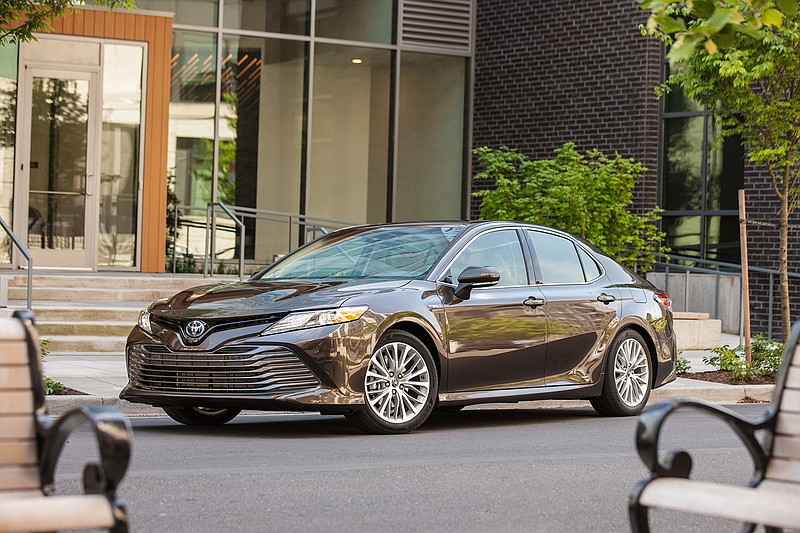 Thanks to engineering improvements to the chassis and hybrid system, the 2020 Camry Hybrid is light on its feet, nimble yet muscular, eager for more.

Special to the Gazette

DEADMAN GAP, Okla. - Sinuous curves lent character to a wide-open, tree-lined highway as the 2020 Camry Hybrid and I climbed into the Kiamichi Mountains near Horse Thief Springs.

I had already pushed the car for a while after clearing traffic near Beavers Bend on U.S. 259, but now I asked for more because, frankly, I had never associated the term "fun-to-drive" with a Camry. Safe, reliable, fuel-efficient, to be sure, but this was a different animal.

Asked to stay between the lines through a series of sweeping esses, this all-new Camry was more than up to the task. Thanks to engineering improvements to the chassis and hybrid system, the car was light on its feet, nimble yet muscular, eager for more. Driving like something built for Bavaria, it did not resist the curves; indeed, it thrived in them.

As chance would have it, the Camry Hybrid was the third vehicle we'd recently tested that rides on Toyota's new global architecture, TNGA for short. Both the Avalon TRD and Lexus ES Hybrid are engaging vehicles with unique personalities, but the new Camry is the sleeper of the lot.

Two inches shorter than its toney cousins, the Camry still benefits from the gentle ride and crisp handling afforded by the platform, which integrates lightweight, high-strength metals with innovative design techniques and sound-deadening materials. These cars have the ride, drive, and comfort qualities of European GT sedans. 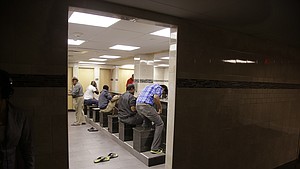 On top of that - or more precisely inside it - is the latest iteration of Toyota's hybrid system. The changes are profound. To begin, Toyota switched over to Lithium-ion batteries, which are lighter, more compact and have higher energy density, greater voltage capacity and lower self-discharge rates. At the same time, the TNGA allowed engineers to move the battery pack from the trunk to beneath the rear seat.

That lowered the car's center of gravity, which profoundly improved handling. Switch the car from normal to sport, and throttle response improves, especially under load. It also felt to us that steering became more responsive, but we've yet to find any engineering notes to confirm that.

Of course, Toyota did not set out to build a GT sedan, it just did so serendipitously. Camry grew into the top-selling sedan in America for 17 years because of safety, reliability and fuel economy. Boy does the new Camry put check marks in those boxes.

Yes, yes. We know no one cares about fuel economy, but if a more environmentally friendly government comes into power in four months, that tune might change. We're not saying it will but caveat emptor.

Two days later, we made an emergency, 700-mile run to Livingston, Louisiana, to rescue Beautiful Blonde Bride, who had slipped on a flight of stairs and broken her ankle in three places. Two days after surgery, we loaded her into the Camry's back seat and brought her home. It wasn't the greatest day of her life, but she immensely appreciated the Camry's composed ride and quiet cabin.

We were still able to stop for shrimp po-boys and boudin. So that part was good. On that journey, the Camry Hybrid delivered 44 mph.

One thing is sure, the Camry Hybrid runs just as strong and smooth as the base 2.5-liter, 203-hp four, which is rated at 34 mpg in combined driving. Indeed, the only way to know whether the gas engine or the battery is doing the work is to select a monitor for that in the driver display.

As we've mentioned, hybrids have manifold benefits. If you have a ceiling fan you are probably aware of the durability of electric motors. The common wisdom is that hybrid systems reduce the workload of the gas engine by about a third, which extends its life, too.

Toyota leads the automotive industry in making safety technology available to drivers, including making standard a host of driver-assist technologies - proven to save lives - which other manufacturers offer only for thousands of dollars of upcharges. To be fair, most manufacturers are coming around to Toyota's way of doing business on this point.

We were especially grateful that our tester came with an optional head-up display, which projected vital information, like speed, speed limit and navigation directions on the lower portion of the windshield. Ripping through the mountains, we didn't have much time to look down.