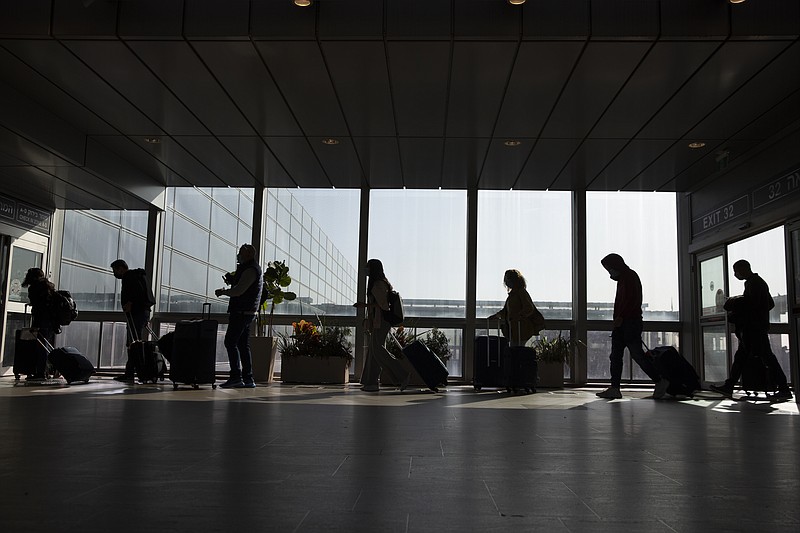 Travelers walk with their luggage in the Ben Gurion Airport near Tel Aviv, Israel, Sunday, Nov. 28, 2021. Israel on Sunday approved barring entry to foreign nationals and the use of controversial technology for contact tracing as part of its efforts to clamp down on a new coronavirus variant. (AP Photo/Ariel Schalit)

THE HAGUE, Netherlands -- Cases of the omicron variant of the coronavirus popped up in countries on opposite sides of the world Sunday and many governments rushed to close their borders even as scientists cautioned that it's not clear if the new variant is more alarming than other versions of the virus.

The variant was identified days ago by researchers in South Africa, and much is still not known about it, including whether it is more contagious, more likely to cause serious illness or more able to evade the protection of vaccines. But many countries rushed to act, reflecting anxiety about anything that could prolong the pandemic that has killed more than 5 million people.

Israel decided to bar entry to foreigners, and Morocco said it would suspend all incoming flights for two weeks starting Monday -- among the most drastic of a growing raft of travel curbs being imposed by nations around the world as they scrambled to slow the variant's spread. Scientists in several places -- from Hong Kong to Europe -- have confirmed its presence. The Netherlands reported 13 omicron cases on Sunday, and both Canada and Australia each found two.

Noting that the variant has already been detected in many countries and that closing borders often has limited effect, the World Health Organization called for frontiers to remain open.

Dr. Francis Collins, director of the National Institutes of Health in the United States, meanwhile, emphasized that there is no data yet that suggests the new variant causes more serious illness than previous COVID-19 variants.

"I do think it's more contagious when you look at how rapidly it spread through multiple districts in South Africa. It has the earmarks therefore of being particularly likely to spread from one person to another. ... What we don't know is whether it can compete with delta," Collins said on CNN's "State of the Union."

Collins echoed several experts in saying the news should make everyone redouble their efforts to use the tools the world already has, including vaccinations, booster shots and measures such as mask-wearing.

"I know, America, you're really tired about hearing those things, but the virus is not tired of us," Collins said.

The Dutch public health authority confirmed that 13 people who arrived from South Africa on Friday have so far tested positive for omicron. They were among 61 people who tested positive for the virus after arriving on the last two flights to Amsterdam's Schiphol airport before a flight ban was implemented. They were immediately put into isolation, most at a nearby hotel.

Canada's health minister says the country's first two cases of omicron were found in Ontario after two individuals who had recently traveled from Nigeria tested positive.

Authorities in Australia said two travelers who arrived in Sydney from Africa became the first in the country to test positive for the new variant. Arrivals from nine African countries are now required to quarantine in a hotel upon arrival. Two German states reported a total of three cases in returning travelers over the weekend.

Israel moved to ban entry by foreigners and mandate quarantine for all Israelis arriving from abroad.

"Restrictions on the country's borders is not an easy step, but it's a temporary and necessary step," Prime Minister Naftali Bennett said at the start of the weekly Cabinet meeting.

Morocco's Foreign Ministry tweeted Sunday that all incoming air travel to the North African country would be suspended to "preserve the achievements realized by Morocco in the fight against the pandemic, and to protect the health of citizens." Morocco has been at the forefront of vaccinations in Africa, and kept its borders closed for months in 2020 because of the pandemic.

The U.S. plans to ban travel from South Africa and seven other southern African countries starting Monday. "It's going to give us a period of time to enhance our preparedness," the United States' top infectious diseases expert, Dr. Anthony Fauci, said of the ban on ABC's "This Week."

Many countries are introducing such bans, though they go against the advice of the WHO, which has warned against any overreaction before the variant is thoroughly studied.

Fauci says it will take approximately two more weeks to have more definitive information on the transmissibility, severity and other characteristics of omicron, according to a statement from the White House Sunday evening.

South Africa's government responded angrily to the travel bans, which it said are "akin to punishing South Africa for its advanced genomic sequencing and the ability to detect new variants quicker." It said it will try to persuade countries that imposed them to reconsider.

The WHO sent out a statement saying it "stands with African nations" and noting that travel restrictions may play "a role in slightly reducing the spread of COVID-19 but place a heavy burden on lives and livelihoods." It said if restrictions are put in place, they should be scientifically based and not intrusive.

In Europe, much of which already has been struggling with a sharp increase in cases over recent weeks, officials were on guard.

The U.K. on Saturday tightened rules on mask-wearing and on testing of international arrivals after finding two omicron cases, but British Health Secretary Sajid Javid said the government was nowhere near reinstituting work from home or more severe social-distancing measures.

"We know now those types of measures do carry a very heavy price, both economically, socially, in terms of non-COVID health outcomes such as impact on mental health," he told Sky News.

Spain announced it won't admit unvaccinated British visitors starting Dec. 1. Italy was going through lists of airline passengers who arrived in the past two weeks. France is continuing to push vaccinations and booster shots.

David Hui, a respiratory medicine expert and government adviser on the pandemic in Hong Kong, agreed with that strategy.

He said the two people who tested positive for the omicron variant had received the Pfizer vaccine and exhibited very mild symptoms, such as a sore throat.

"Vaccines should work but there would be some reduction in effectiveness," he said. 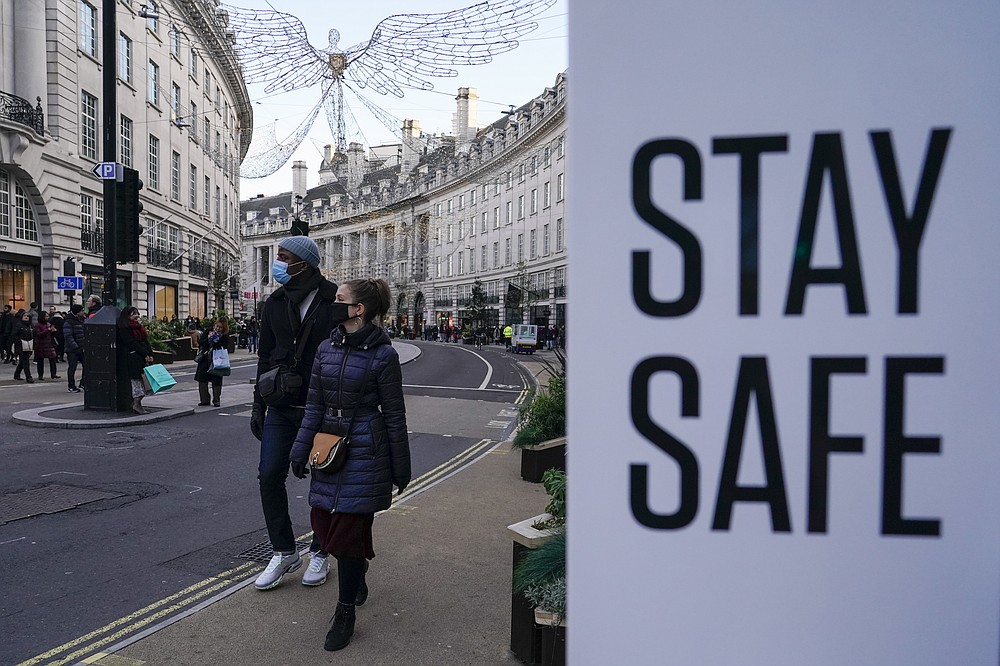 People wear face masks as they walk, in Regent Street, in London, Sunday, Nov. 28, 2021. Britain&#x27;s Prime Minister Boris Johnson said it was necessary to take &quot;targeted and precautionary measures&quot; after two people tested positive for the new variant in England. He also said mask-wearing in shops and on public transport will be required. (AP Photo/Alberto Pezzali) 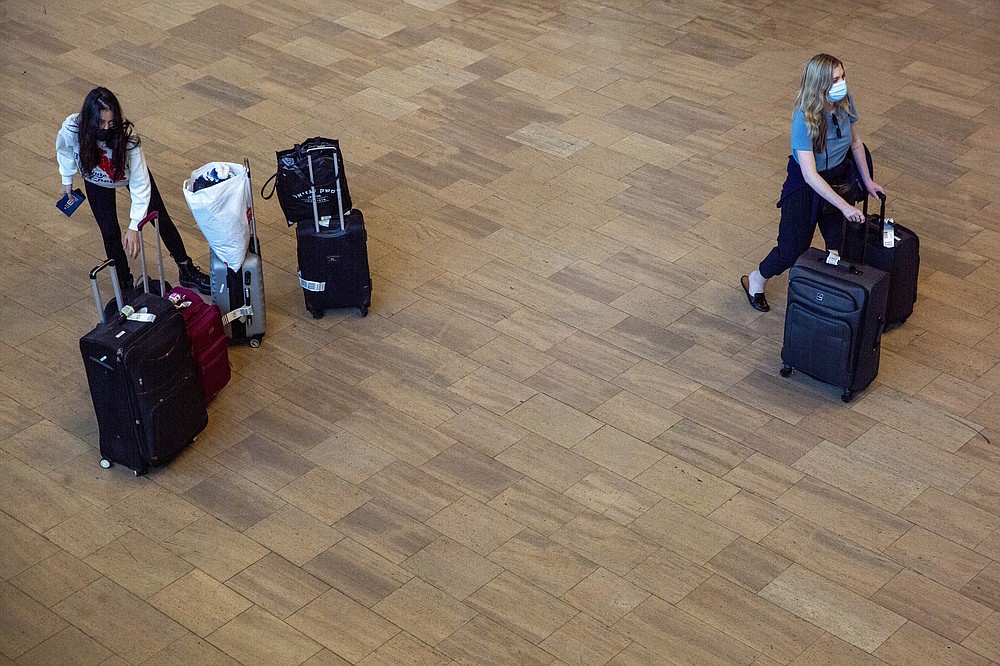 Travelers wearing protective face masks arrive to Ben Gurion Airport near Tel Aviv, Israel, Sunday, Nov. 28, 2021. Israel on Sunday approved barring entry to foreign nationals and the use of controversial technology for contact tracing as part of its efforts to clamp down on a new coronavirus variant. (AP Photo/Ariel Schalit) 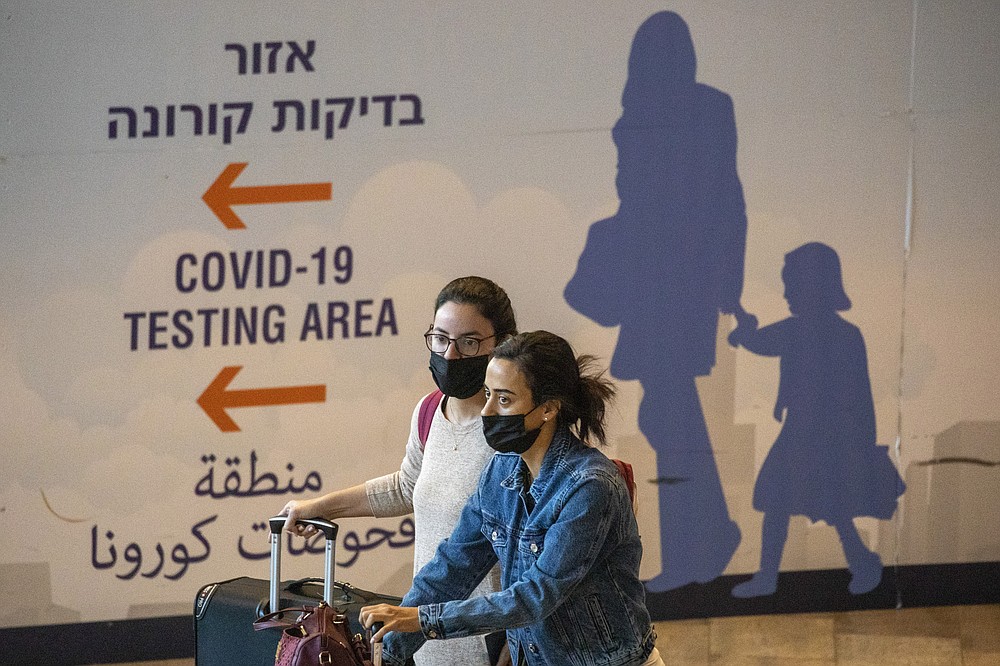 Travelers wearing protective face masks arrive at Ben Gurion Airport near Tel Aviv, Israel, Sunday, Nov. 28, 2021. Israel on Sunday approved barring entry to foreign nationals and the use of controversial technology for contact tracing as part of its efforts to clamp down on a new coronavirus variant. (AP Photo/Ariel Schalit) 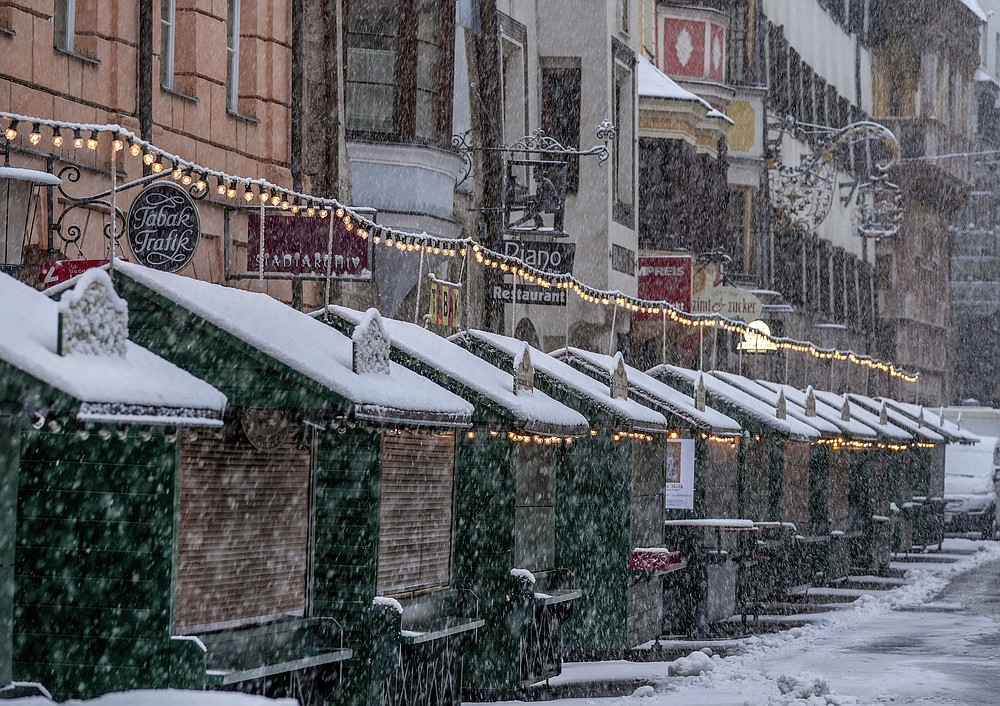 Christmas booths are all closed on the Christmas market in Innsbruck, Austria, as snow falls on Sunday, Nov. 28, 2021. Austria is in a lockdown following a spike in COVID-19 infections. (AP Photo/Michael Probst) 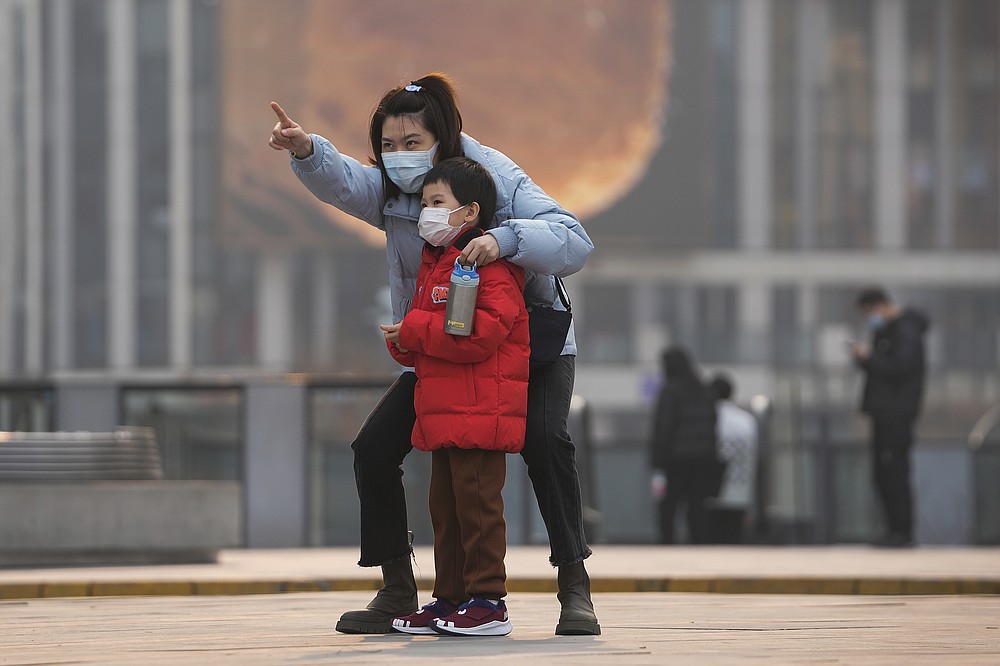 A woman and a child, both wearing face masks to protect from COVID-19 look at a commercial office building in Beijing, Sunday, Nov. 28, 2021. (AP Photo/Andy Wong) 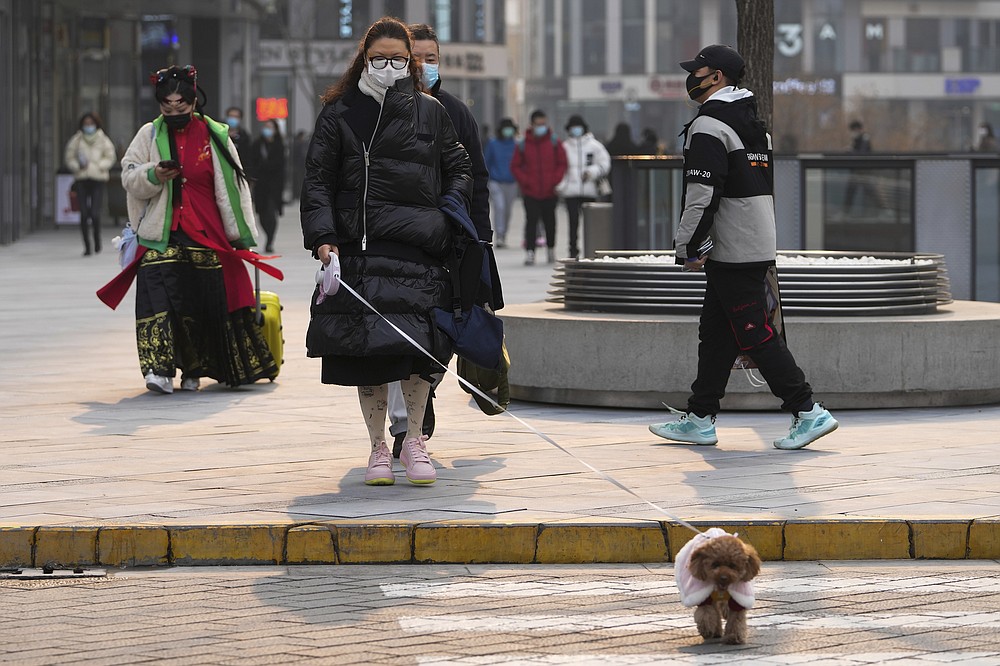 A woman wearing a face mask to protect from COVID-19 walks a dog at a commercial office building in Beijing, Sunday, Nov. 28, 2021. (AP Photo/Andy Wong) 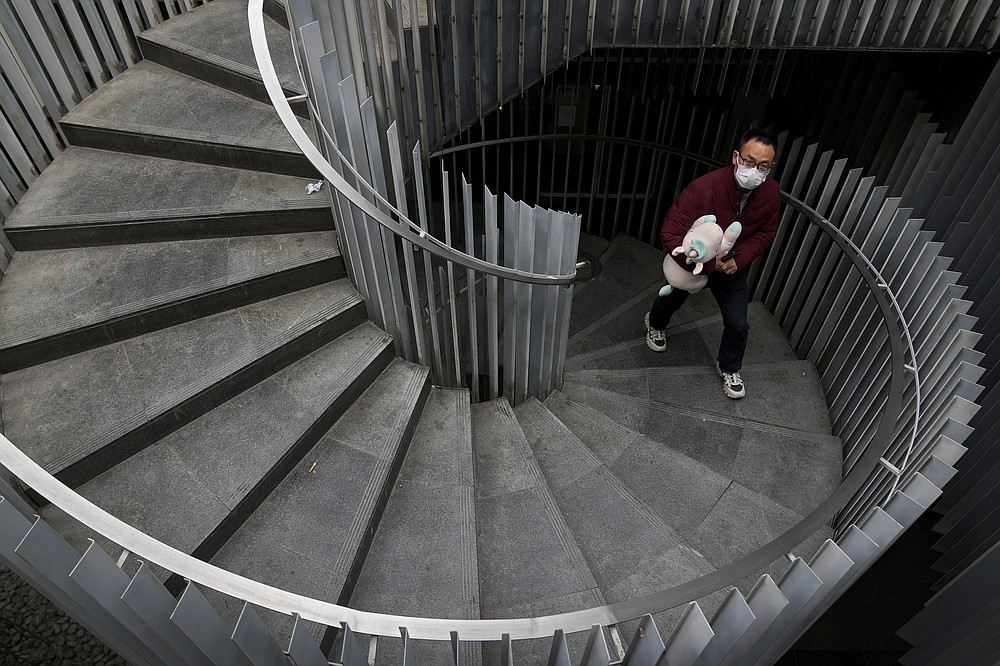 A man wearing a face mask to protect from COVID-19 holds a unicorn soft toy as he walks up an oval staircase at a commercial office building in Beijing, Sunday, Nov. 28, 2021. (AP Photo/Andy Wong) 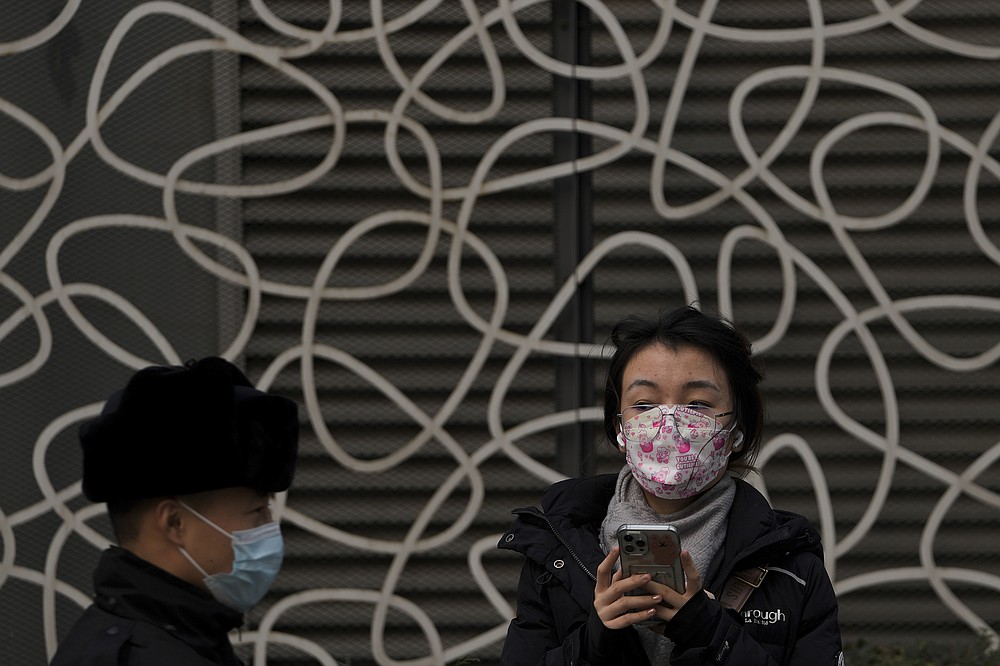 A woman wearing a face mask to protect from COVID-19 looks at a masked security guard patrolling at a commercial office building in Beijing, Sunday, Nov. 28, 2021. (AP Photo/Andy Wong) 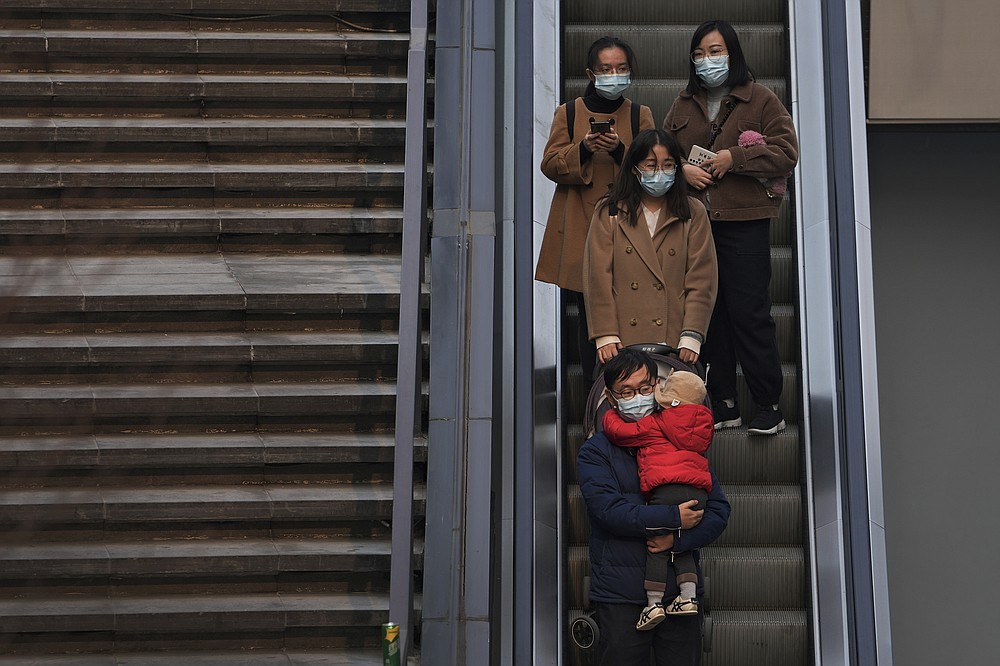