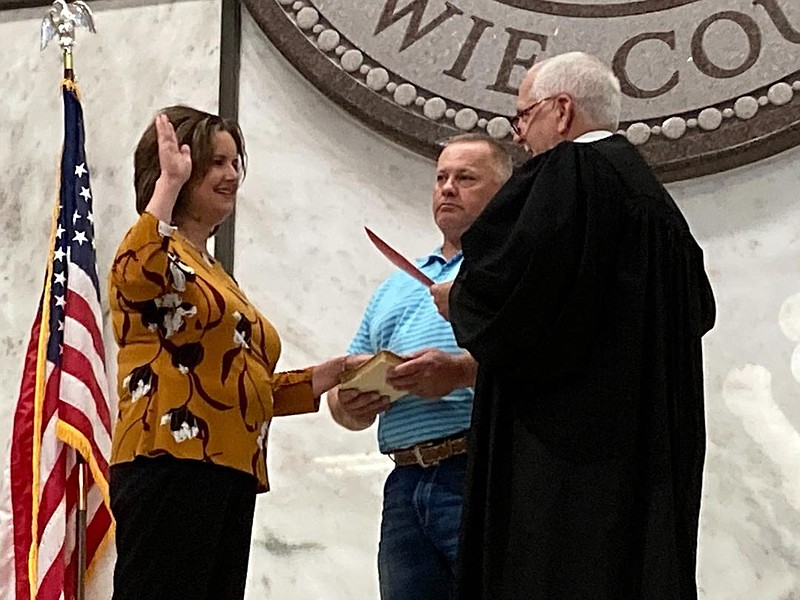 Lori Caraway is sworn in as Bowie County District Clerk by 202nd District Judge John Tidwell in the courthouse lobby Thursday morning. Caraway swore to faithfully discharge her duties with a hand on her mother's first Bible as her husband, Joe Caraway, stood by.

NEW BOSTON, Texas -Bowie County has a new district clerk but she's an old hand at the business of the office.

Lori Caraway has worked in the district clerk's office since 1995. Until Thursday, she served as chief deputy to Bowie County District Clerk Jill Harrington, who retired after more than 40 years working in the county clerk's office. 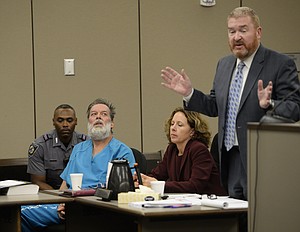 Caraway said she's been blessed to have worked and learned the office under the leadership of Harrington and Harrington's long-serving predecessor Billy Fox.

"They were great mentors," Caraway said. "We've grown really close over the years."

Caraway was sworn in by 202nd District Judge John Tidwell as her husband stood next to her. Caraway's hand rested on her mother's first Bible, a family treasure symbolic of the faith Caraway relies on every day. Among the large crowd gathered to witness the administration of her oath of office were Caraway's pastor, parents, work family and many friends.

Before Tidwell began the formalities, he recognized Harrington's years of service as a public servant to the citizens of the county and the work of the clerk's office in general. The office manages and preserves records and court filings of many kinds.

Tidwell noted the challenge the office faced when a ransomware attack in December sidelined for months the digital systems on which the office depends. Computer systems throughout the county had to be rebuilt but in the interim, the work had to continue.

"We had to break out the typewriter," Caraway said.

Caraway and Harrington possessed the experience to run the office and conduct the important record-keeping without a computer. Caraway said some of the younger hires in the office were at a loss when the hackers disrupted the routine of the office but soon adjusted.

"The district clerk's office handled it without fail," Tidwell said.

Harrington, who began working in the clerk's office in 1978, said she looks forward to the retired life with her husband, also retired, and the time she'll have for grandchildren and other pursuits.

"They're family and I love them," Harrington said of her coworkers. "But it's time to move on to the next phase."