IN YOUR VIEW | Halloween: Yea or nay on spooky holiday? 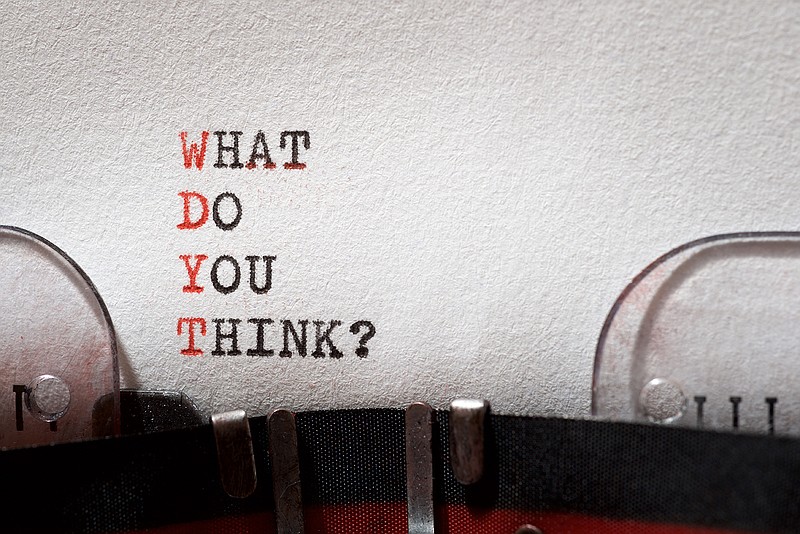 October starts today, a month when the temperatures -- hopefully -- become a bit cooler the fall colors traditionally start to appear.

But it's also the spookiest month of the year. Candy and decorations are already in the stores in anticipation of the October's finale, Halloween.

Halloween is somewhat controversial. Some see it as harmless fun. Others as an affront to faith. And there are safety concerns as well, especially in this age of COVID-190.

We want to know what you think. Do you and your family enjoy Halloween? If so, how will you celebrate the holiday this year?

Send your response (50 words maximum) to [email protected] by Wednesday, October 6. You can also mail your response to the Texarkana Gazette Friday Poll, at P.O. Box 621, Texarkana, TX 75504 or drop it off at our office, 101 E. Broad St, Texarkana, Ark. Be sure to include your name, address and phone number. We will print as many responses as we can in next Friday's paper.

Absolutely not! When the Republicans reduced taxes for the rich and therefore reduced revenue coming into the state, is why the state is having problems taking care of issues like roads, jails etc. Now you want to tax us because Republican legislators failed in taking care of the people and the state. -- R.K., Texarkana, Arkansas

-- For the safety of this community, something has to change. There are many people out there needing incarceration but can not due to lack of jail space.

-- Just some food for thought. We are one of the leading nations in imprisoning our own citizens. Could we work on anti-crime and rehabilitation legislation instead of just making more room in the jail? I've been pulled over 4 times in the last month and I've been driving for 6 years without a problem. Maybe they are just working too hard for their Christmas bonus.

-- Maybe use that money to open another homeless shelter or give it to the boys and girls club. It would probably drastically lower the number of bodies in your jail if the homeless had more support and these kids had something to do other than shoot each other and do drugs. Put it towards rehabilitation programs for drug addicted peoples. Just a thought.

-- Hell naw to ANY tax increase!

-- No, the taxes are already to high.

-- One of the highest taxed places in America. No more taxes!

-- Decriminalize marijuana and stop locking people up for it for one thing.

-- Put an ankle monitor in them and keep them at home.

-- No, we're already taxed enough! Always spending money on stupid stuff , and when you run out , then you want the good old taxpaying citizens to fund everything. Heck no!

-- If they would stop housing other agencies people. So NO on a tax.

-- Raise ur kids right and people wouldn't be in jail!

-- How about some actual penalties for crimes that reduce the urge to be a repeat offender? How about they do some work while in there to pay for their stay and possibly learn a trade of some sort so they don't end up going back to the poor lifestyle that got them there? Why should law abiding citizens have to pay for people who that screw up? I think we already carry enough of the burden due to our wonderful government  

-- Why not just do what Bowie County does. Every time Texarkana College wants more money, property taxes get raised to fund TC without Bowie County residents getting to vote on it. I am not suggesting that a college and a jail have anything in common, but they both benefit the community.

-- Could you use what you already have correctly before you go asking for more? I wouldn't mind paying more in taxes if we actually saw results from the increase. Arkansas side is run down and the streets are crumbling except for those that got redone a few years ago. You can start by putting that street sweeper to work that I haven't seen in years.

-- Bowie County is out of space too. Lately, it's been like working an impossible puzzle trying to make everyone "fit." DWI's, PI's and drug possession are the biggest cause for arrests right now.

-- We didn't get a vote when the Quorum Court spent millions on land for a "potential business." While I do agree the jail is overcrowded, I do not agree with increasing our taxes to fund it when the Quorum Court spends our tax money on something so ridiculous like land for "potential business" that is just going to sit there because if anyone wants to start a new business, they are going to do it on the Texas side because you guessed it.... Taxes are cheaper! Until our money is used appropriately, I am not going to agree for our already high tax rate to be increased more.

-- Nooo. Everyone already shops on the Texas side since taxes are cheaper. Why should we have our taxes raised again to support more inmates. Harder punishments need to be enforced so they aren't repeat offenders. Lets go back to chain gangs and see how many repeat offenders we have. Public hangings?

-- ENOUGH already! Tax in Miller County is already too high. Yes I do shop on the Texas side and I plan to keep shopping on the Texas side. We have been lied to and ripped off for years. I vote no.

Print Headline: IN YOUR VIEW | Halloween: Yea or nay on spooky holiday?