What science can tell us about the benefits of religion 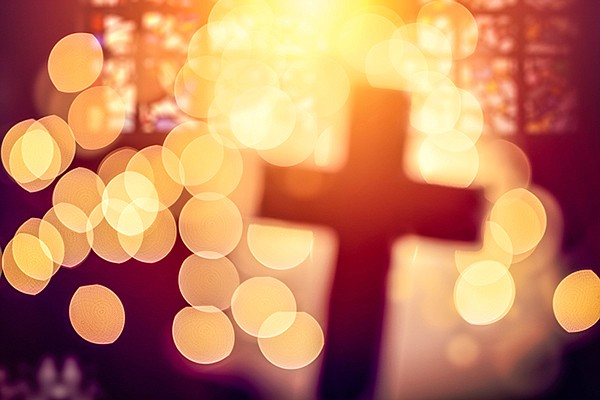 People have turned to religious practice to help them deal with issues of life and death, loss and meaning for thousands of years. In his new book "How God Works," psychologist David DeSteno uses the latest scientific evidence to examine how rituals help shape behaviors such as compassion, trust and resilience and why many of them are so beneficial. He looks at how Shinto rituals surrounding childbirth can help strengthen parental bonds with children. He shows how Buddhist meditation can increase compassion. And he considers how the Jewish practice of sitting shiva helps those who are mourning.

DeSteno, a psychology professor at Northeastern University, also argues people don't need to be religious to benefit from the wisdom that traditions have to offer. On his new podcast, he interviews clergy members and authors such as the Rev. James Martin, Sharon Salzberg and Michael Pollan as he seeks to reduce the boundaries between science and religion. We spoke with him in late September. This interview is edited for length and clarity.

Q: How did you decide to explore the science behind religious practice?

A: When I was in college, I was trying to decide between being a religious-studies major and a psychology major. I decided that I would become a psychologist because I could run experiments and get data to answer questions. But the questions that always fascinated me were: What role does religion play in people's lives? Does it make it better? How do we become virtuous? How do we find connection? My lab centers on how we help people become kinder, fairer, more compassionate and more honest. Then I had a student interested in meditation who pointed out to me that its original purpose was to end suffering. So we decided to explore, does meditation actually make us behave more virtuously? We did a study that found that after just a couple weeks of meditation, people became more compassionate.

Q: How did this study launch you into other topics?

A: We also looked at how gratitude makes people more honest and more generous. For example, many Christians offer a prayer of thanksgiving during grace before a meal. Many Jews, when they wake up each morning, say a prayer for being thankful. It felt like we were discovering techniques in the field of psychology that were used for thousands of years. Rituals and practices give you tools to leverage the mind and body.

People like Richard Dawkins and Steven Pinker say all of religion is folly, superstition or a plague on the mind. But it would be strange if thousands of years of thought meant to help people meet the challenges of life didn't have something to offer.

I can't be sure God doesn't exist. I see no evidence of it, but I can't be sure. So let's not debate that. I decided to look at the spiritual practices that we know help people. Saying you believe in God doesn't predict anything about your well-being. But the time people spend engaged in spiritual practices like going to a church or synagogue, on average, the longer, healthier and happier their lives are. That tells me there is some wisdom in these tools, whether you believe that they were divinely inspired or not. I think science needs to take them seriously.

Q: Was there something that particularly surprised you when you looked at different rituals?

A: The most surprising one to me was dealing with the rituals surrounding grief. Every religion has a way to deal with grief because the trick with grief is not to avoid it but to move through it. My favorite example is the Jewish ritual of sitting shiva. It's a seven-day period that's a sacred obligation for people to go visit the mourning. It's not just a nice thing to do. You must go. You must bring them food to assist them in any ways you can. People come together in groups of 10 or more to say a prayer. And in those prayers, they often recite these prayers in unison with one another. When people recite things and move in unison, they feel more compassion and connection for each other. It reduces loneliness. And when someone dies, they cover mirrors in a house together. And although there's theological reason for that, there's scientific evidence showing that when you look in a mirror, whatever emotion you're feeling becomes more intense. Covering a mirror is one way to begin to reduce grief a little bit.

Q: How would you describe your own religious or spiritual beliefs?

A: I grew up Catholic. I drifted from the church when I was in college. I teeter on the edge of being atheist or agnostic. I think now I'm firmly agnostic. I don't know what is out there or what I believe theologically, but I'm open to the possibility that there is something. I embrace a lot of the principles about how to live in this world that most of the religions offer about what virtues are and how to treat other people.

Q: Has any of this research changed your own personal practice?

A: It has influenced me in cultivating prayers and having a gratitude practice every day. In studies, if we ask people to think about something you're grateful for, whether they are thanking God or thanking their parents or thanking their friends, they have the same resolve when we give them the opportunity to share their money with people. In our research, we'll have someone come up to them who's an actor who asks for help and they're more likely to pay it forward. So in my life, I now make it a ritual for myself to take time to reflect on things that I'm grateful for every day.

Q: What would you say to someone who might be offended that you would try to apply the rituals without also adopting the religious belief they're based on?

A: I would never be in favor of taking the symbols and the prayers in and of themselves, or cultural appropriation. Those belong to the cultures that develop them and should honor the traditions that develop them. But if you look at the brilliance of shiva, why couldn't you adopt the practice of covering the mirrors in your house? Why can't you spend time with family and friends and eat together and maybe even sing together in the way to get that synchrony going? It's the same way you can do yoga or practice mindfulness. It's using use tools that we have in this world, whether they're God-given or knowledge that we figure out on our own.

Q: Where do you see some of the trends in religious practice headed?

A: People are leaving faiths. They're looking for new ways to be spiritual. But when you leave the institution behind, you often leave behind all these tools, rituals and practices that form the daily rhythms of life. You can't just create a ritual randomly. Over thousands of years they've been kind of debugged to leverage the mechanisms of our minds and bodies.

One thing that does worry me is a move toward doing these things online. We had to do it remotely because of covid-19. But these rituals are designed to happen and work best in the presence of other individuals. When we're together, our heart rate synchronizes our breath. These mechanisms are leveraging our minds and bodies. Why do people kneel in church? There's research showing that if you show people information on a screen above them, they place more emphasis and believe more on the higher screen because they're looking up at it. Physiologically, we interpret something higher verticality as more authoritative. If you're sitting on your computer or watching on your phone, I worry that we're going to lose a lot of the power and majesty of certain rituals because we're doing them remotely. That's not how they were designed to work.

Print Headline: What science can tell us about the benefits of religion