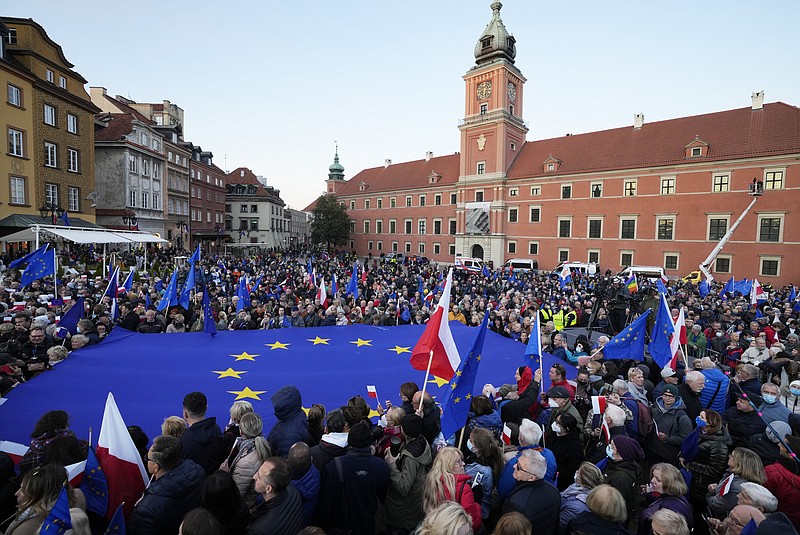 People wave EU and Polish flags in support of Poland's EU membership during a demonstration, in Warsaw, Poland, Sunday, October 10, 2021. Poland's constitutional court ruled Thursday that Polish laws have supremacy over those of the European Union in areas where they clash, a decision likely to embolden the country's right-wing government and worsen its already troubled relationship with the EU. (AP Photo/Czarek Sokolowski)

WARSAW, Poland -- Large protests were held across Poland on Sunday to show support for the European Union after the nation's constitutional court ruled this week that the Polish constitution overrides some EU laws.

Critics of the right-wing nationalist government fear the court ruling could lead to "Polexit," or Poland being forced to leave the EU over an apparent rejection of the bloc's laws and values.

Thousands of people in Warsaw filled Castle Square in the historic center, with some chanting, "We are staying!"

Donald Tusk, the top opposition leader in Poland and a former EU leader, had urged Poles to turn out, casting the demonstration as an effort to defend Poland's continued membership in the 27-nation bloc. Addressing a crowd in Warsaw, he expressed satisfaction at the sight of thousands of protesters.

Tusk strongly denounced the actions of the ruling party under leader Jaroslaw Kaczynski, who has been in conflict with the EU for six years as his party has sought greater control over the courts. The EU views the changes as an erosion of democratic checks and balances.

EU membership is extremely popular in Poland, having brought new freedom to travel and a dramatic economic transformation to the central European nation, which had endured decades of communist rule until 1989.

Speaking to the crowd, Tusk warned that a "pseudo court, a group of people dressed in judge's gowns and on the order of the party's leader, in violation of the Polish constitution, decided to lead our homeland out of the EU."

"After all, we know very well why they want to leave the European Union, in fact in order to violate citizens' rights with impunity, to violate democratic principles and to steal without restraint," Tusk said.

A far-right leader led a small group of counter-protesters who sought to drown out the words of Tusk and other speakers, including 94-year-old woman who fought in the anti-Nazi resistance during World War II.

Kaczynski has denied that he wants Poland to leave the bloc, though top ruling party members have recently used language suggesting that might be their aim.

Jacek Sasin, a prominent ruling party member, called the the idea of Polexit "the invention of a weak opposition that has no other ideas."

The state broadcaster, a mouthpiece for the ruling Law and Justice party, did not show the large crowds and ran headlines that read "Protest against the Polish constitution," and "Tusk attacks Polish sovereignty."

Lech Walesa, who won the Nobel Peace Prize for his opposition to Poland's communist regime, spoke to a crowd in Gdansk to applause. Walesa is a frequent critic of the government, which he accuses of destroying many of Poland's democratic achievements.

The court ruling, which was issued Thursday by a court largely loyal to the nationalist government, marks a challenge to the primacy of EU law. The prime minister asked for the review after the European Court of Justice ruled in March that Poland's new regulations for appointing Supreme Court justices could violate EU law and ordered the right-wing government to suspend them. 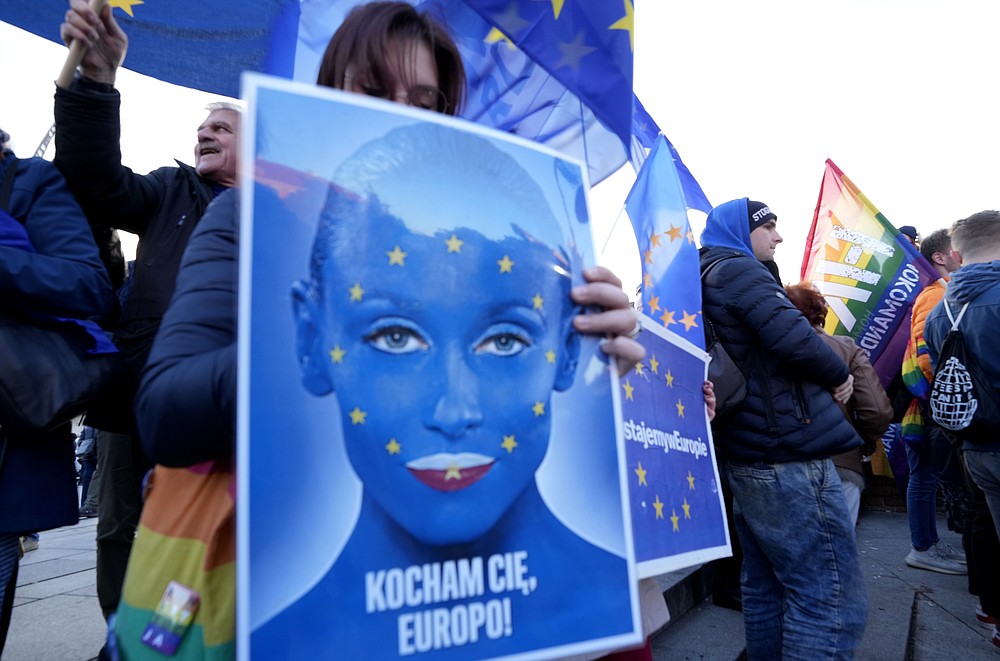 A woman holds a sign in support of Poland's EU membership which reads 'I love you Europe' during a demonstration, in Warsaw, Poland, Sunday, October 10, 2021. Poland's constitutional court ruled Thursday that Polish laws have supremacy over those of the European Union in areas where they clash, a decision likely to embolden the country's right-wing government and worsen its already troubled relationship with the EU. (AP Photo/Czarek Sokolowski)