Author speaks about book on a local true crime 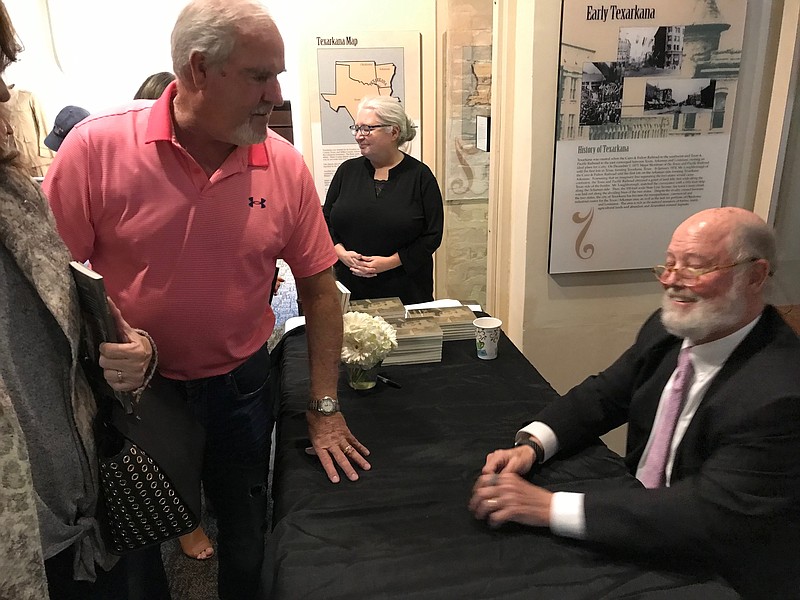 Staff photo by Greg Bischof Texarkana native Robert Couch signs copies of a new book he wrote titled “Uncle Brice, A Killing, A Trial, A True Story. The bok focuses on a family secret and a true crime.

TEXARKANA - Some 85 years after a relative of Texarkana native Robert Couch dies, Couch writes a book on the intriguing true crime visited upon that family member.

"When I started asking my mom about her Uncle Brice's death, she didn't want to talk about it," Couch told an audience of about 30 local residents gathered at the Texarkana Museum of Regional History Monday evening.

"In 2008, I came back to Texarkana and started working on the history of my family tree when I found out that Uncle Brice died at a fairly early age, but mom said she still wouldn't talk about it," Couch said.

Having no luck with breaking his mom's self-imposed code of silence, Couch said he eventually found out that his relative rented property and collected rent.

"I found out that one day (in 1936) a scuffle on the property ensued between Uncle Brice and a janitor named Butch Moorhead," Couch said. "A shot from a gun hit the janitor but a bullet from the same gun hit Uncle Brice in the head and killed him. The janitor said it was self-defense."

Couch went on to say he started looking at more research and found it fascinating.

"I was lucky in my research," he said. "I finally hit the jackpot when I found out that the lawyer, who took on Butch Moorhead's case, had kept the records on it. Both Scott Bruner and Jamie Simmons, here at the museum, helped me a lot on this. I also got the names of all the jurors."

The book, titled "Uncle Brice: A Killing, a Trial, a True Story,"details the twists and turns of a Texarkana murder trial that occurred over 80 years ago. The true-crime legal drama can be purchased at tinyurl.com/RobCouchBook online.

Following his presentation, Couch took questions from the audience.

Couch will be speaking about his book again today at the Texarkana Bar Association.

(EDITOR'S NOTE: In lieu of spoilers, let's just say the ending is sure to surprise.)