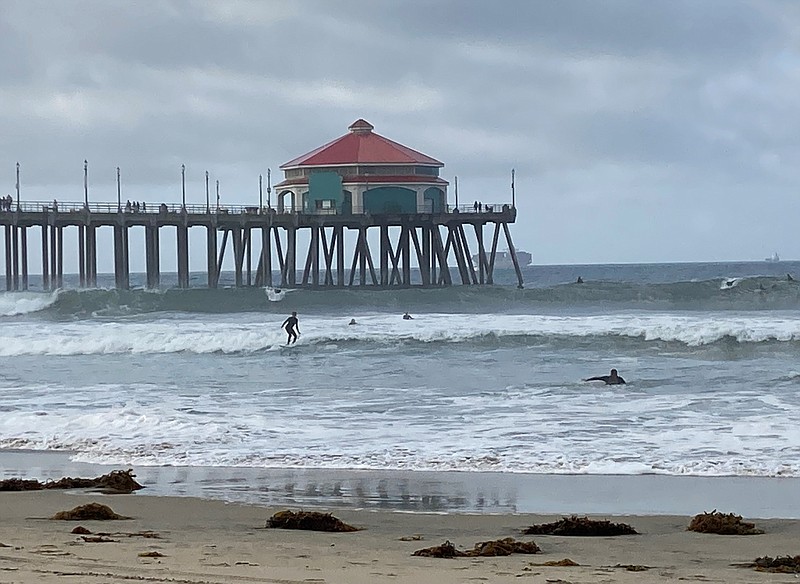 Surfers and swimmers return to the Huntington Beach pier waves since the crude oil spill at the California beach, Monday, Oct. 11, 2021. The reopening of Huntington Beach, dubbed &quot;Surf City USA,&quot; came far sooner than many expected after a putrid smell blanketed the coast and blobs of crude began washing ashore. (AP Photo/Amy Taxin)

LOS ANGELES -- It took little more than 48 hours from the moment a major oil spill was discovered off Southern California until the first lawsuit was filed against the Houston company that owns and operates the ruptured pipeline.

Finding the cause, who is to blame and if they will be held accountable will take much longer.

Several federal and state agencies are investigating in parallel as they seek the cause of the pipe rupture, how quickly pipeline operators responded and determine whether criminal charges are warranted.

Coast Guard Capt. Jason Neubauer said investigators are trying to find which ship among thousands of possibilities may have snagged the pipeline with its anchor in the past year, possibly during rough seas and high winds in January.

"We are not ruling out anybody at this time," Neubauer said.

A possible leak off the Orange County coast south of Los Angeles was first reported Oct. 1. The spill was confirmed the next morning, and crude came ashore on Huntington Beach and then spread south to other beaches. Much of the coastline nearby was shut down more than a week, crippling businesses that cater to beachgoers and boaters.

It could take a long time for investigators to comb through marine tracking data to see which ships passed over and anchored near the Amplify Energy pipeline running from platform Elly to the Long Beach port.

Investigations by federal prosecutors, the Coast Guard and several other federal agencies, including the National Transportation Safety Board, could lead to criminal charges, civil penalties and new laws or regulations.

"Criminal charges -- when they're warranted -- you absolutely want to go after for all the reasons that you pursue criminal charges: accountability, deterrence, punishment," said attorney Rohan Virginkar, a former assistant U.S. attorney who helped prosecute BP for the Deepwater Horizon oil spill in the Gulf of Mexico in 2010. "But really in these environmental cases, it's about finding somebody who's going to pay for the cleanup."

Coast Guard investigators already have boarded two vessels and plan to track down others, many from overseas, Neubauer said. They will inspect anchors for damage and review all logs kept by the captain, deck officers and engineers, and the voyage data recorder -- the equivalent of the so-called black box on airplanes. They will also interview crew.

Under some environmental laws, prosecutors only have to show negligence to win a conviction, Virginkar said. That could lead to a charge against a shipping company for anchoring outside an assigned anchorage or too close to a pipeline marked on nautical charts.

Other investigators, including federal pipeline regulators, will focus on Amplify Energy, which owns the three offshore oil platforms and the pipeline.

They will review pipeline inspections for evidence of corrosion that might show it was being operated negligently and seek any information that records were falsified, which is what they found in the BP case, said attorney William Carter, a former federal environmental crimes prosecutor. A forensic analysis will be performed after the cracked is retrieved from 100 feet (30 meters) of water.

The Amplify pipeline was required to have thorough inside and outside checks on alternating years. The most recent showed no issues requiring repairs, according to federal documents.

Prosecutors will also scrutinize control room data to see if there were pipeline pressure drops that would have indicated a possible leak and what was done to respond, Carter said.

The company could be prosecuted if it realized there was a leak and did not quickly call state and federal hotlines to alert the Coast Guard, fish and wildlife officials and multiple other agencies that respond to spills, Carter said.

Prosecution for an untimely response is fairly common in spills, he said.

"The elements necessary for that violation are: I knew there was a release, and I didn't immediately report it -- regardless of the cause," Carter said. "I mean, it could have been lightning or an earthquake did it and you knew it, and you didn't report it in a timely fashion."

Plains All American Pipeline was convicted for that crime for a breach in a pipe on land that sent tens of thousands of gallons of crude pouring onto a Santa Barbara beach and into the ocean in 2015.

In the Amplify pipeline leak, federal regulators said a low-pressure alarm at 2:30 a.m. Oct. 2 alerted control room operators on platform Elly to a possible leak. The Pipeline and Hazardous Materials Safety Administration said the line wasn't shut down until 6:01 a.m. and the Coast Guard wasn't notified until 9:07 a.m.

Amplify CEO Martyn Willsher has refused to answer questions about the reported pressure drop, including the fact that the first report to authorities made on behalf of the company listed the incident at 2:30 a.m. He has insisted the company didn't know of the spill until a company inspection boat saw the sheen at 8:09 a.m.

Carter said lawyers probably told Willsher not to discuss the timeline because he could incriminate himself.

If charged with failure to report the spill quickly, the company could also face charges for allowing oil to harm endangered species and other wildlife that might have been saved by a more prompt response.

Federal prosecutors have five years to bring felony charges. Carter said they would likely wait until they know the cost of the damage to demand restitution.

Federal penalties for failing to notify authorities can be $500,000 or it could be as much as double the total damage. State penalties could run up to $10 per gallon spilled that wasn't recovered.

Regardless of whether a ship is ultimately found to be the cause of the spill, the Oil Pollution Act of 1990 requires whoever spills the oil to pay for the cleanup, said attorney James Mercante, a maritime lawyer. Amplify, however, can later seek to recover its losses from other liable parties.

Mercante said the law was passed in the wake of the Exxon Valdez tanker spill in Alaska in 1989 to speed the cleanup without finger-pointing.

So far, two proposed class-action lawsuits have been filed on behalf of a disc jockey who runs beachfront events in Huntington Beach and a surf school that operates in the city known as "Surf City USA."

Those cases will rely heavily on government investigations and will take years to play out. 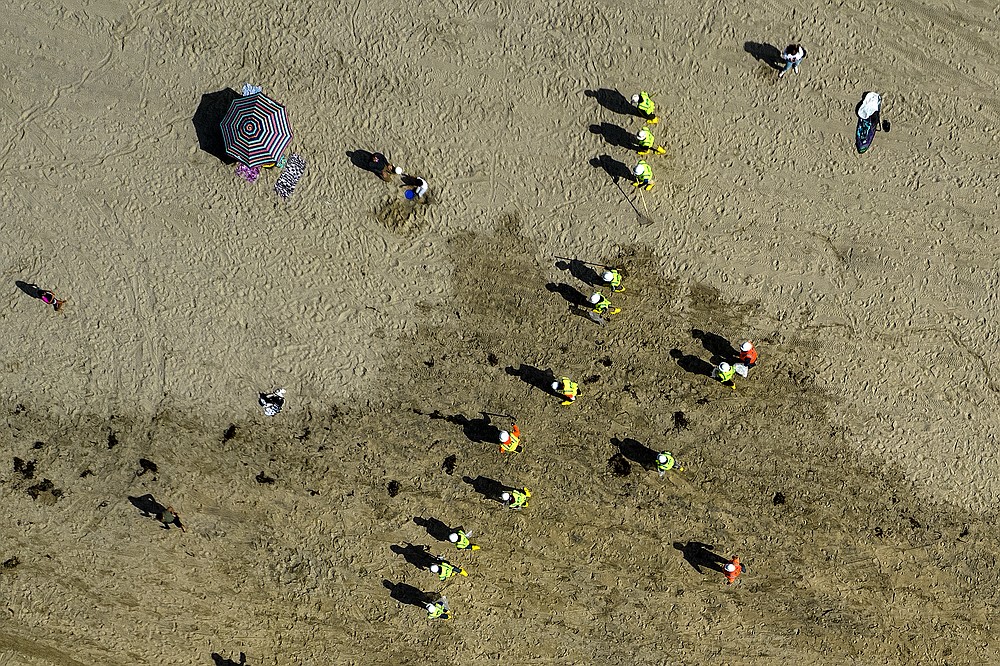