Like a paisley tie, solid Big 12 defenses are trendy again 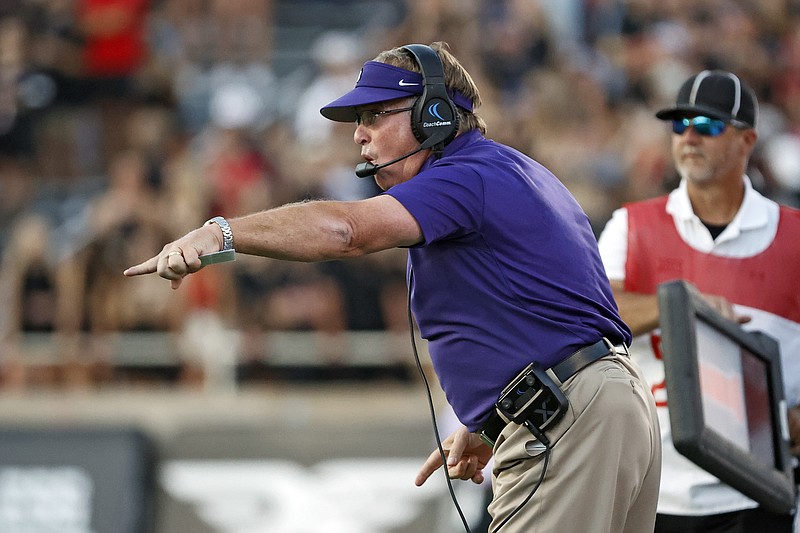 TCU coach Gary Patterson yells out to his players during the first half of an NCAA college football game against Texas Tech, Saturday, Oct. 9, 2021, in Lubbock, Texas. (AP Photo/Brad Tollefson)

Gary Patterson compare efforts by defenses to keep pace with changing offenses to the on-and-off fashion cycle of the paisley tie.

In the nearly four decades that Patterson has been in college football, including two decades as TCU's head coach, he's seen great defenses come and go, especially in a score-happy league like the Big 12.

Over the past 18 months as the coronavirus pandemic forced college teams to change their routines, meet less often in person and more by way of technology, Patterson said he believes Big 12 defenses adapted.

"You just look at the numbers and the way people, at least in our league, are playing defense," Patterson said.

Kansas State, No. 4 Oklahoma, Iowa State and No. 12 Oklahoma State rank in the top 12 nationally in rushing defense.

The Cyclones are third nationally in total defense and lead the conference in many other categories. Oklahoma State is first in the league in third-down conversion defense and the fewest touchdown passes allowed, while Baylor is tops in interceptions and has returned two turnovers for touchdowns.

Beyond the numbers, some teams have evolved. Patterson points to Kansas State, which is giving opponents a new 3-3-5 defensive look this season similar to those used with success in the NFL and at other colleges.

The pandemic "gave people an opportunity to do some extra things and do some stuff to try to catch up," Patterson said. "I'm not sure we had any more challenges during that time. If anything, I think it gave us a little bit more time to kind of look at things."

Patterson said the pattern of standout Big 12 defenses "goes through ebbs and flows" similar to NFL teams trying to keep up with changes made by other offenses.

That brings up the reference to the paisley tie, which "goes out of fashion," Patterson said. "I think in my 61 years, it's come back three or four times where it's now a favorite of people. And so I think offense and defense kind of go that way. I think there for a couple of years, offense really had the advantage. I think defense has caught up a little bit with some things."

Mike Gundy, in his 17th season as Oklahoma State's coach, said standout defenses can be minimized by the presence of mature quarterbacks in the league, "but overall, I'd say defenses have rallied a little bit in the last couple of years."

Texas Tech coach Matt Wells chalks up it up to having solid coaches on that side of the ball.

Aranda has turned things around on his defense since going 2-7 in the pandemic-shortened 2020 season. He credits an experienced unit and a staff whose consistency in messaging and teaching "has really allowed the guys to play confident and play fast."

Oklahoma State's defense has improved in each of the past three seasons under defensive coordinator Jim Knowles. The Cowboys haven't allowed more than 23 points in a game this season

Kansas State holds the league record for the fewest points allowed in a season with 144 in 1999, a 12-point average. Averaging under 20 points for a season on defense has been done three times under the current 10-team makeup that began in 2012.

Campbell said all 11 players on his defense strive to work together and understand where their help is on every play.

"That's something we work really hard at," he said. "And I think the other piece we really work hard it is getting our 11 guys to run to the football."

Both Campbell and Aranda point out that Big 12 teams will typically see a different type of defense every week.

"There's so much variety in the league," Aranda said. "In other leagues, there's really good defenses as well, but much more similarity."

Campbell said with so many different types of defenses, "I think that can be challenging for offenses. So it certainly is unique in our conference where not everybody is running the same thing or the same foundational fronts and coverages. There's a lot of different schemes in terms of what you see. I think that has certainly shown up at least in the Big 12 so far this year." 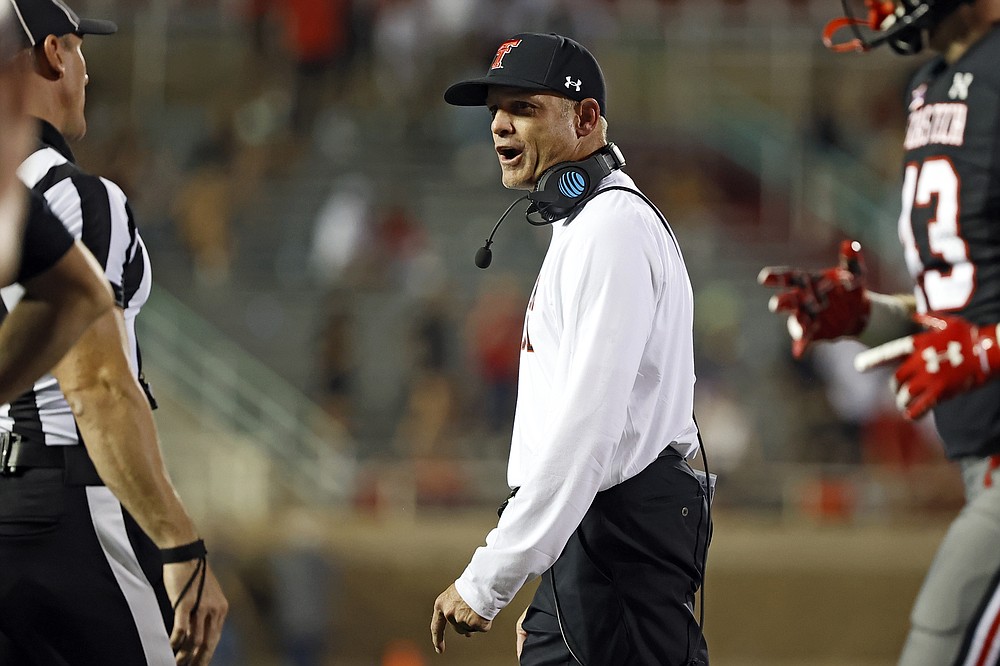 Texas Tech coach Matt Wells yells out to a referee during the second half of an NCAA college football game against TCU, Saturday, Oct. 9, 2021, in Lubbock, Texas. (AP Photo/Brad Tollefson) 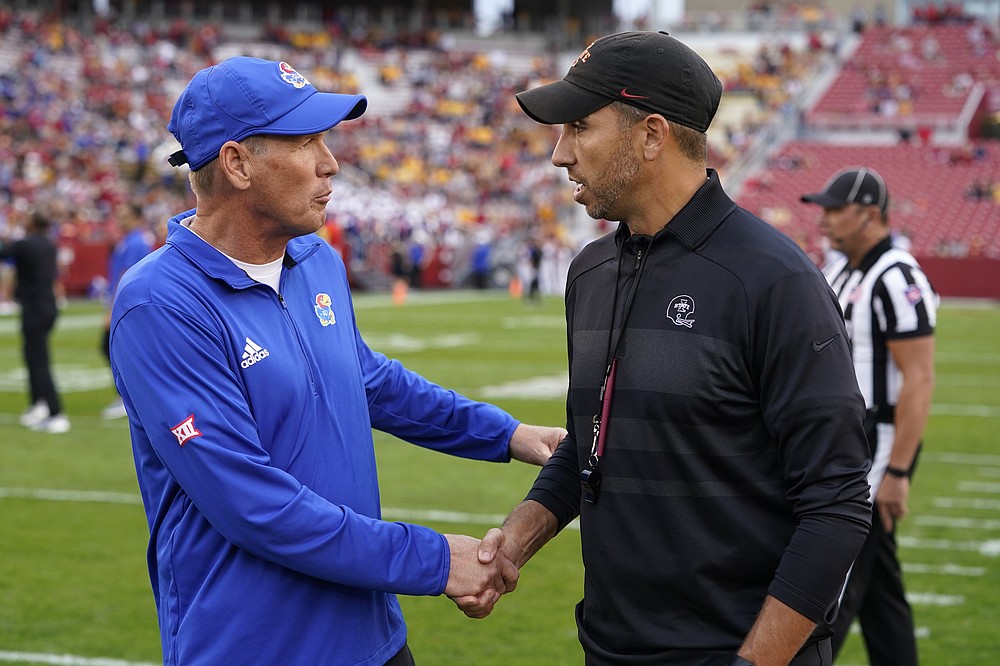 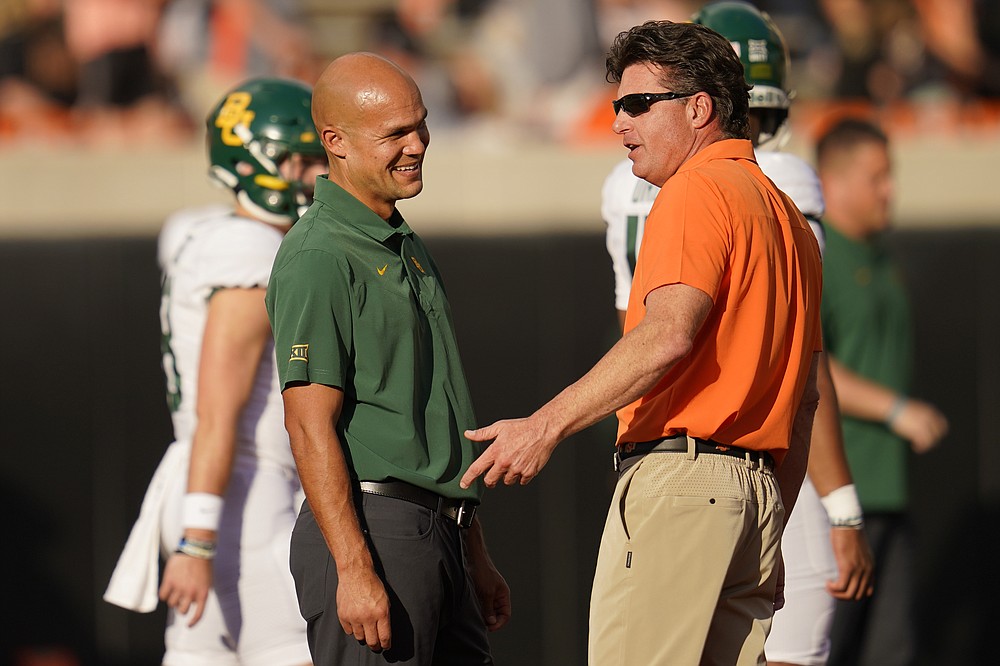