Next on FDA's agenda: Booster shots of Moderna, J&J vaccines 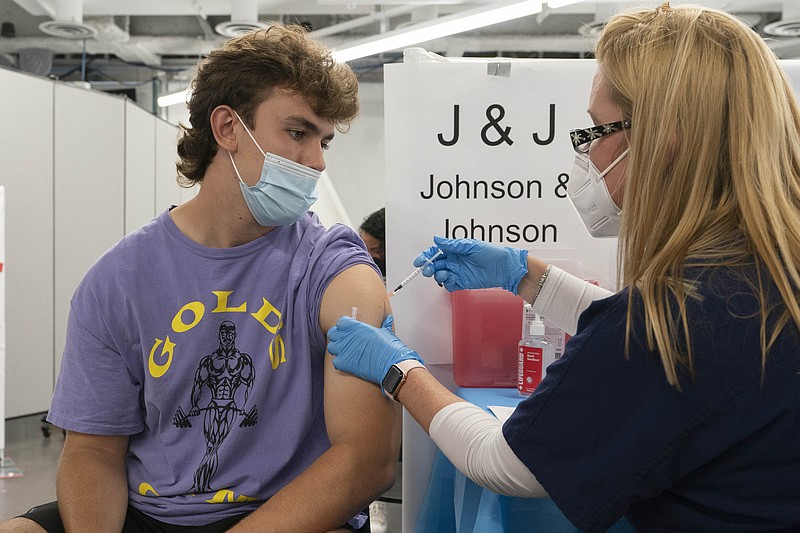 FILE - In this July 30, 2021, file photo, Bradley Sharp, of Saratoga, N.Y., gets the Johnson &amp; Johnson vaccine from registered nurse Stephanie Wagner in New York. Starting Thursday, Oct. 14, 2021, the Food and Drug Administration convenes its independent advisers for the first stage in the process of deciding whether extra shots of Moderna or Johnson &amp; Johnson vaccines should be dispensed and, if so, who should get them and when. (AP Photo/Mark Lennihan, File)

WASHINGTON -- With many Americans who got Pfizer vaccinations already rolling up their sleeves for a booster shot, millions of others who received the Moderna or Johnson & Johnson vaccine wait anxiously to learn when it's their turn.

On Thursday and Friday, the Food and Drug Administration convenes its independent advisers for the first stage in the process of deciding whether extra doses of the two vaccines should be dispensed and, if so, who should get them and when. The final go-ahead is not expected for at least another week.

After the FDA advisers give their recommendation, the agency itself will make a decision on whether to authorize boosters. Then next week, a panel convened by the Centers for Disease Control and Prevention will offer more specifics on who should get them. Its decision is subject to approval by the CDC director.

The process is meant to bolster public confidence in the vaccines. But it has already led to conflicts among experts and agencies -- and documents the FDA released Tuesday suggest this week's decisions will be equally difficult.

In one earlier vaccine dispute, the CDC's advisory panel last month backed Pfizer boosters at the six-month point for older Americans, nursing home residents and people with underlying health problems. But CDC Director Dr. Rochelle Walensky overruled her advisers and decided boosters should also be offered to those with high-risk jobs such as teachers and health care workers, adding tens of millions more Americans to the list.

Some health experts fear the back-and-forth deliberations are muddling the public effort to persuade the unvaccinated to get their first shots. They worry that the talk of boosters will lead people to wrongly doubt the effectiveness of the vaccines in the first place.

When the FDA's panel meets to review the Moderna and J&J vaccines, experts will discuss whether a third Moderna shot should contain just half the original dose and what's the best timing for a second shot of the single-dose J&J vaccine.

The panel will also look into the safety and effectiveness of mixing-and-matching different brands of vaccine, something regulators have not endorsed so far.

An estimated 103 million Americans are fully vaccinated with Pfizer's formula, 69 million with Moderna's and 15 million with J&J's, according to the CDC. Regulators took up the question of Pfizer boosters first because the company submitted its data ahead of the other vaccine makers.

Tim Anderson, a U.S. history teacher at a high school outside Louisville, Kentucky, already had his two Moderna shots months before he came down with COVID-19 in August. While his symptoms hit him "like a sledgehammer," he is convinced that the inoculation saved him and his girlfriend from the more severe effects of the disease.

The two are now awaiting clearance of a Moderna booster shot.

"Until we can build up enough immunity within our own self and, you know, as a group of humans, I'm willing to do what I need to do," Anderson, 58, said.

The FDA meetings come as U.S. vaccinations have climbed back above 1 million per day on average, an increase of more than 50% over the past two weeks. The rise has been driven mainly by Pfizer boosters and employer vaccine mandates.

While the FDA and CDC so far have endorsed Pfizer boosters for specific groups only, Biden administration officials, including Dr. Anthony Fauci, have suggested that extra shots will eventually be recommended for most Americans.

In a new review of Moderna's data, the FDA did not indicate Tuesday if it was leaning toward clearing the company's booster. It said vaccines used in the U.S. still provide protection, and it raised questions about some of Moderna's data.

The two initial Moderna shots contain 100 micrograms of vaccine each. But the drugmaker says 50 micrograms ought to be enough for a booster for healthy people.

A company study of 344 people gave them a 50-microgram shot six months after their second dose, and levels of virus-fighting antibodies jumped. Moderna said the booster even triggered a 42-fold rise in antibodies able to target the extra-contagious delta variant.

Side effects were similar to the fevers and aches that Moderna recipients commonly experience after their second regular shot, the company said.

As for people who got the J&J vaccine, the company submitted data to the FDA for different options: a booster shot at two months or at six months. The company said in its FDA submission that a six-month booster is recommended but that a second dose could be given at two months in some situations.

J&J released data in September showing that a booster given at two months provided 94% protection against moderate-to-severe COVID-19 infection. The company has not disclosed patient data on a six-month booster, but early measures of virus-fighting antibodies suggest it provides even higher protection.

Even without a booster, J&J says, its vaccine remains about 80% effective at preventing COVID-19 hospitalizations in the U.S.

In one recent study, researchers compared about 14,000 people who had gotten their first Moderna dose a year ago with 11,000 vaccinated eight months ago. As the delta variant surged in July and August, the more recently vaccinated group had a 36% lower rate of "breakthrough" infections compared with those vaccinated longer ago. 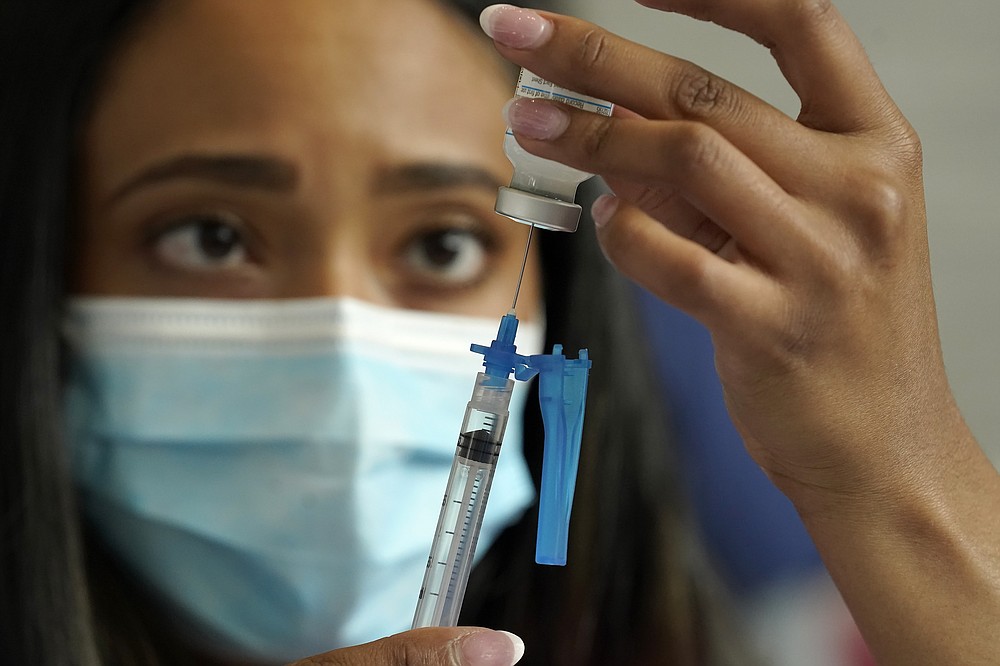 FILE - In this May 19, 2021, file photo, a licensed practical nurse draws a Moderna COVID-19 vaccine into a syringe at a mass vaccination clinic at Gillette Stadium in Foxborough, Mass. Starting Thursday, Oct. 14, 2021, the Food and Drug Administration convenes its independent advisers for the first stage in the process of deciding whether extra shots of Moderna or Johnson &amp; Johnson vaccines should be dispensed and, if so, who should get them and when. (AP Photo/Steven Senne, File) 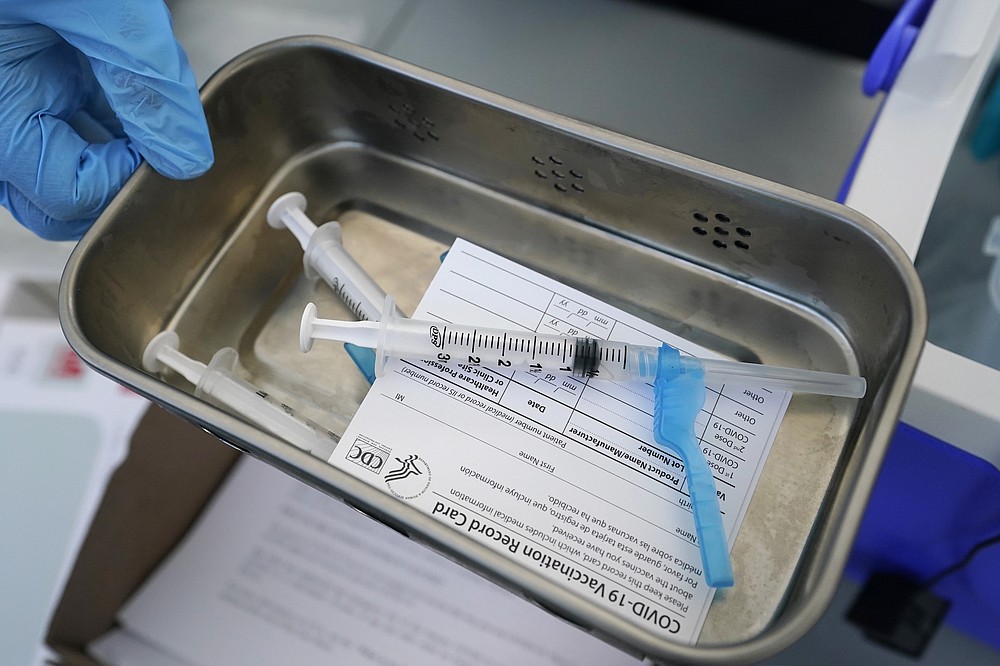 FILE - This May 13, 2021, file photo shows syringes filled with the Johnson &amp; Johnson vaccine at a mobile vaccination site in Miami. Starting Thursday, Oct. 14, 2021, the Food and Drug Administration convenes its independent advisers for the first stage in the process of deciding whether extra shots of Moderna or Johnson &amp; Johnson vaccines should be dispensed and, if so, who should get them and when. (AP Photo/Wilfredo Lee, File) 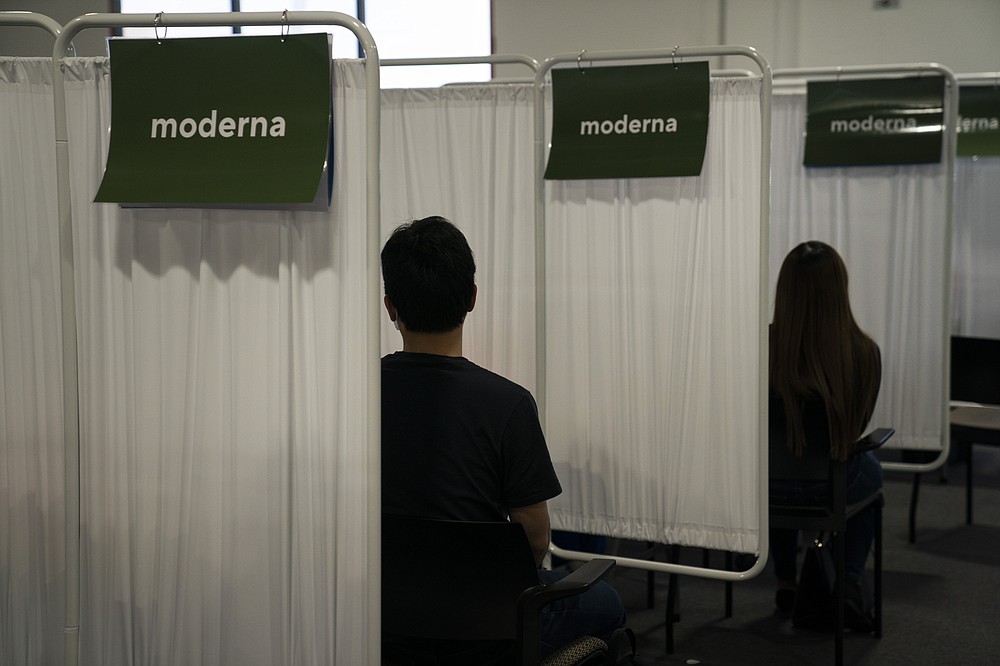 FILE - In this May 21, 2021, file photo, two people wait to receive the Moderna COVID-19 vaccine at Providence Edwards Lifesciences vaccination site in Santa Ana, Calif. Starting Thursday, Oct. 14, 2021, the Food and Drug Administration convenes its independent advisers for the first stage in the process of deciding whether extra shots of Moderna or Johnson &amp; Johnson vaccines should be dispensed and, if so, who should get them and when. (AP Photo/Jae C. Hong, File)