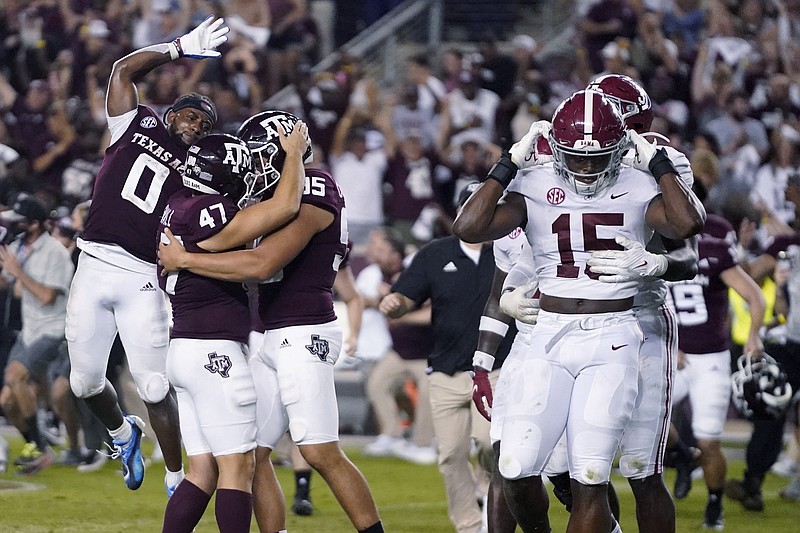 With one Small kick and a rather sizable upset, Texas A&M caused quite a shakeup in the Southeastern Conference Western Division.

The Aggies' 41-38 upset of then-No. 1 Alabama on Seth Small's field goal opened the door for the Crimson Tide's division rivals. It's not just a parade of teams lining up neatly behind 'Bama any more.

While Alabama (5-1, 2-1) seems to remain the team to beat and a playoff contender, it won't be a weekly cakewalk for the Tide.

Coach Nick Saban had already warned his team of the potential pitfalls.

"He said it before it even happened that we were gonna get hit in the mouth if we prepared the way we were preparing," Alabama defensive lineman DJ Dale said.

Four SEC West teams are deadlocked with one league loss. Auburn, Mississippi State and No. 13 Mississippi are all 1-1 in SEC games.

And the aura of invincibility around Alabama has been knocked off, at least temporarily.

This weekend will provide another shakeup, one way or another. Mississippi State found itself in a better spot in the league standings after an open date, but coach Mike Leach doesn't put much stock in Alabama losing to an unranked team.

The Bulldogs host the now fifth-ranked Tide on Saturday.

"The rankings are all out of whack," Leach told reporters. "Anybody that thinks there are 30 teams better than Texas A&M is out of their minds. Someday when I am in your position I'll go right down the list and tell you which ones.

Two of the three two-loss West teams are ranked: No. 21 Texas A&M and No. 17 Arkansas, set to host Auburn on Saturday.

The league's only two unbeaten teams -- No. 1 Georgia and No. 11 Kentucky -- reside in the Eastern Division and also meet on Saturday.

But the West has the potential for more chaos with other teams gaining hope from the upset in College Station.

Ole Miss steps out of the division to face resurgent Tennessee after staying in that one-loss group with a 52-51 win over Arkansas. First things first.

"We'll focus on that when the time comes but right now we're just focusing on going 1-0 this week, and that's it," Rebels wide receiver Braylon Sanders said.

"We're looking at the bigger picture, but you have to go 1-0 every day to get to the big picture."

Here's what the road looks like for the SEC West hopefuls:

The Skinny: The Tide obviously isn't the seemingly unbeatable team of last year's national title run, and a few injuries haven't helped. But Saban's teams have been adept at bouncing back in the past and improving from defeat. There's no questioning the talent.

Road ahead: Alabama has four straight home games after Mississippi State, hosting Tennessee, LSU and Arkansas along with New Mexico State. Then comes a visit to in-state rival Auburn.

The Skinny: The Tigers' only two losses have come to new No. 1 Georgia and No. 7 Penn State, but they also had to mount a late comeback to beat Georgia State in coach Bryan Harsin's first season.

Road ahead: The Tigers visit Arkansas this weekend but also host Ole Miss on Oct. 30 after an open date and end the regular season against the Tide.

The Skinny: Has already had four games decided by four points or less, including both losses. That 26-22 win at Texas A&M could wind up looming large for both teams.

Road ahead: The Bulldogs still have four games against ranked teams, starting with Alabama. Then come No. 11 Kentucky, road trips to Arkansas at Auburn and the Egg Bowl against Ole Miss.

The Skinny: The offense is potent as ever but it's hard to overlook how the defense struggled against Arkansas, especially giving up 37 second-half points "We had felt so much progress in the offseason, spring and then fall through a number of games, and then that second half kind of had the same feeling as a year ago," Rebels coach Lane Kiffin said.

Road ahead: The Rebels, who lost to Alabama, start with a visit to Tennessee Saturday night. They also host Texas A&M on Nov. 13 and have road trips to Auburn and Mississippi State. 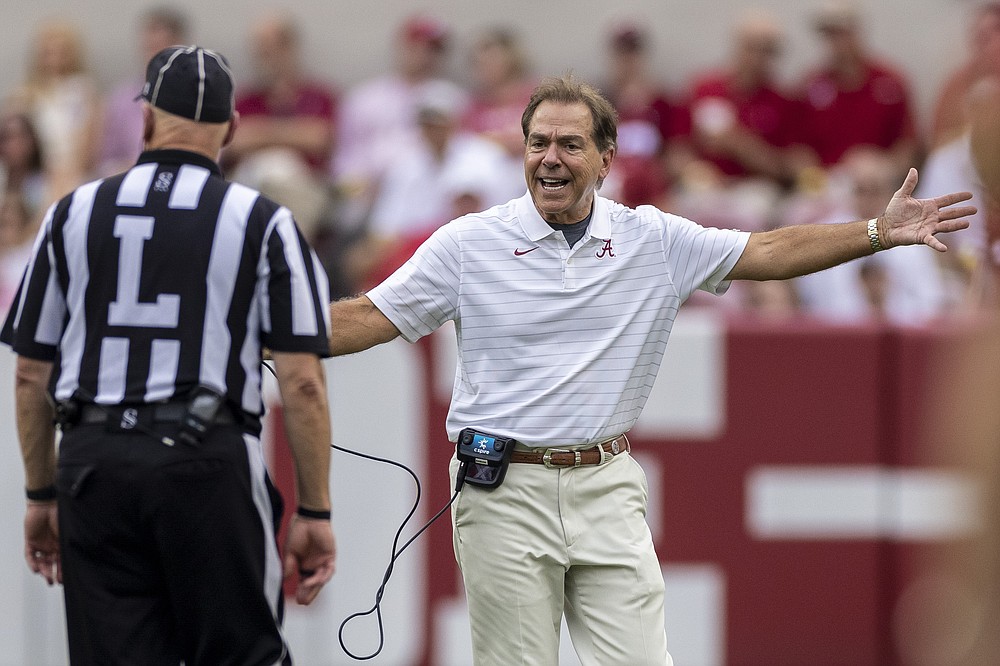 Alabama head coach Nick Saban argues a call during the second half of an NCAA college football game against Mississippi, Saturday, Oct. 2, 2021, in Tuscaloosa, Ala. (AP Photo/Vasha Hunt) 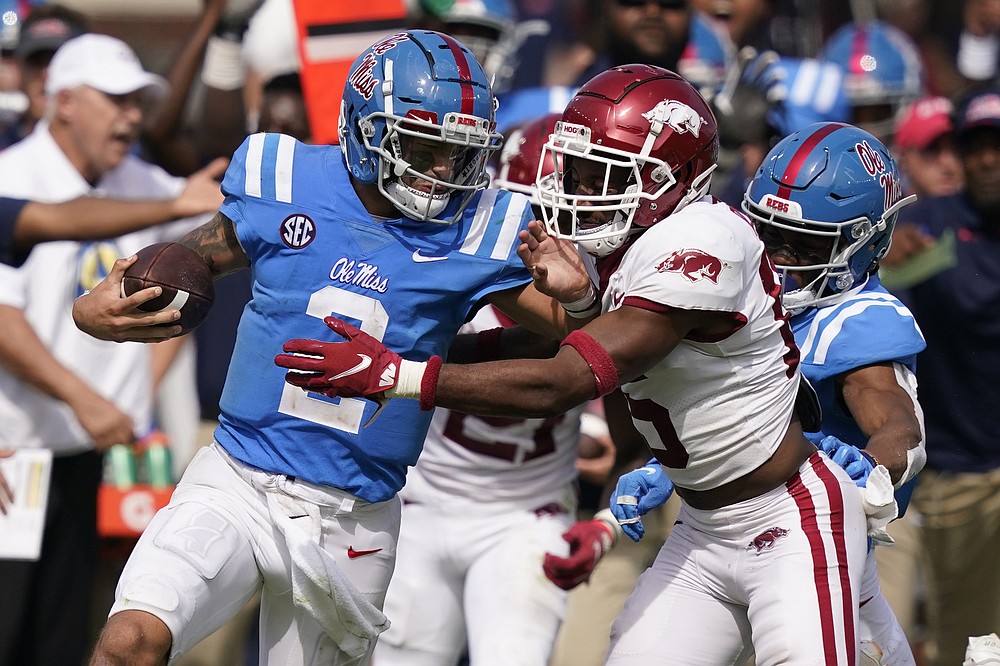 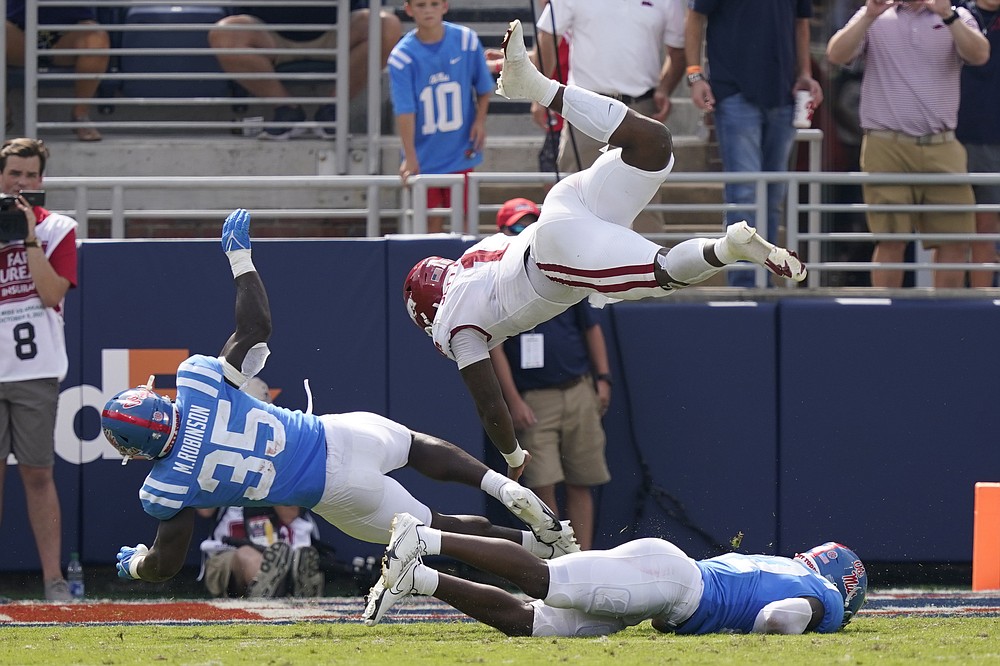 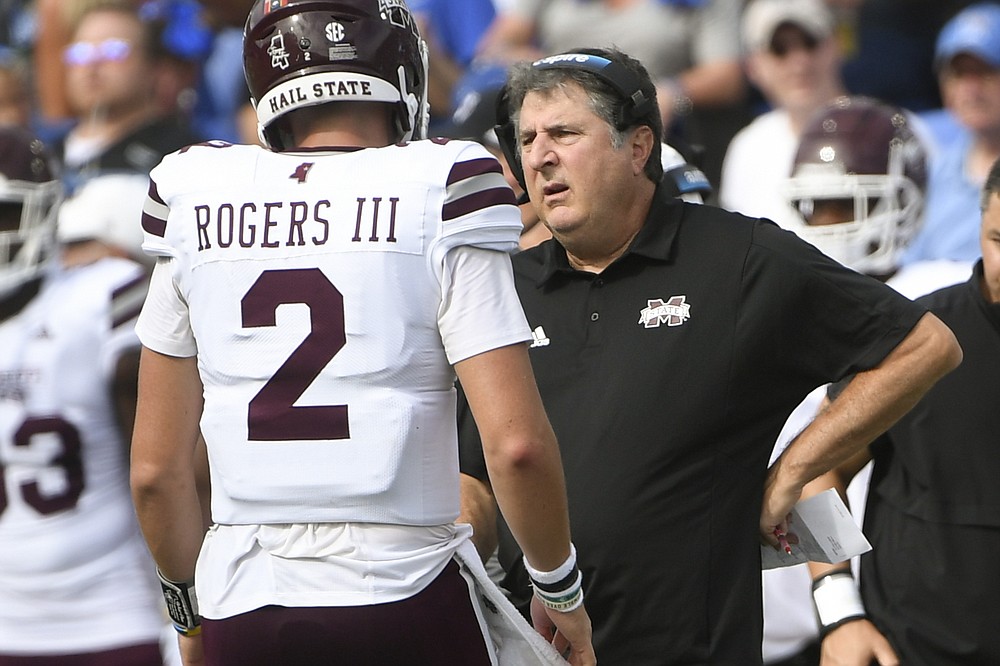