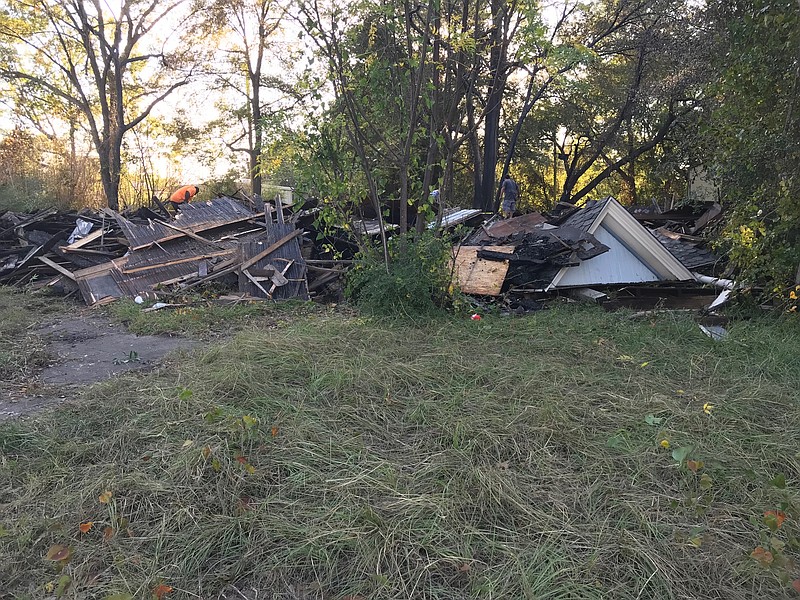 Local residents sift through the burned wreckage of a vintage wood-frame home in the 700 block of Pecan Street Sunday evening. The house caught fire Sunday morning and the Texarkana Fire Department said the city has a suspect in custody. (Staff Photo By Greg Bischof)

TEXARKANA, Ark. -- The Fire Department say the city has a suspect in custody in connection with a fire that destroyed a vacant vintage wood-frame house in the 700 block of Pecan Street on Sunday morning.

Texarkana Arkansas Fire Department Battalion Chief Chad Honea said fire units arrived at the scene around 10 a.m., battled the blaze for about 45 minutes to an hour before bringing the flames under control.

Honea said witnesses saw a male suspect fleeing from the home as flames began to show.

The Queen Anne Victorian home was built in 1894 by Alvah Horace Whitmarsh, a lumberman and civic leader. The Texarkana chapter of the Junior League was organized at the house and Whitmarsh's daughter, Marguerite Whitmarsh Holman, served as the chapter's first president.

The house was later used as a law office by attorney Jim Davis. It was placed on the National Register of Histopric Places in 1980.

Local resident Misty Jimenez, who owns a nearby historic home on Pecan Street, said the home's owner is currently living in Austin and said that he was hoping that work crews weren't in the process of bulldozing the house down, because he had some keep-sake's in the house that he still wanted.

However, most of the house was bulldozed down by Sunday evening.