Law enforcement officials investigate a scene where, according to Harris County Sheriff Ed Gonzalez, three juveniles were found living alone along with the skeletal remains of another person, possibly a juvenile, in a third floor apartment at the CityParc II at West Oaks Apartments on Sunday, Oct. 24, 2021, at in west Houston. (Mark Mulligan/Houston Chronicle via AP)

HOUSTON -- The skeletal remains of a child were found inside an apartment in the Houston area along with three surviving siblings who appear to have been abandoned, a sheriff said.

One of the children, a 15-year-old, called the Harris County Sheriff's Office on Sunday afternoon and told authorities that his 9-year-old brother had been dead for a year and the body was inside the apartment, the office said in a statement.

Deputies responded and found the teen, and two other siblings ages 10 and 7, living alone in the apartment, Harris County Sheriff Ed Gonzalez told reporters. The skeletal remains were also located.

"It appears that the remains had been there for an extended period of time. And I emphasize extended," Gonzalez said.

The sheriff said it also appeared that the surviving children were "fending for each other," with the oldest sibling caring for the younger two. It was unclear whether any of the kids were attending school.

The younger children appeared to be malnourished and had physical injuries, the statement said. All three siblings were taken to a hospital to be assessed and treated.

The apartment where the children were living didn't have any power and a neighbor had helped the children by charging a cell phone for them and buying them food, Deputy Thomas Gilliland, a spokesman for the sheriff's office, said Monday.

The mother of the children and her boyfriend were later located, authorities said. Both were questioned and later released, Gonzalez said in a tweet on Monday. Gilliland said investigators were still conducting interviews on Monday and still waiting for an autopsy report to determine a cause of death for the child whose remains were found.

"Investigators are diligently looking through everything," Gilliland said.

"Child Protective Services does have history with the family, but there was no active CPS investigation at the time the children were discovered alone in their apartment," the agency said.

Neighbors expressed shock and disbelief when they learned about the children. Kayla Williams told the Houston Chronicle that she has two children, but she doesn't plan to tell them what happened. 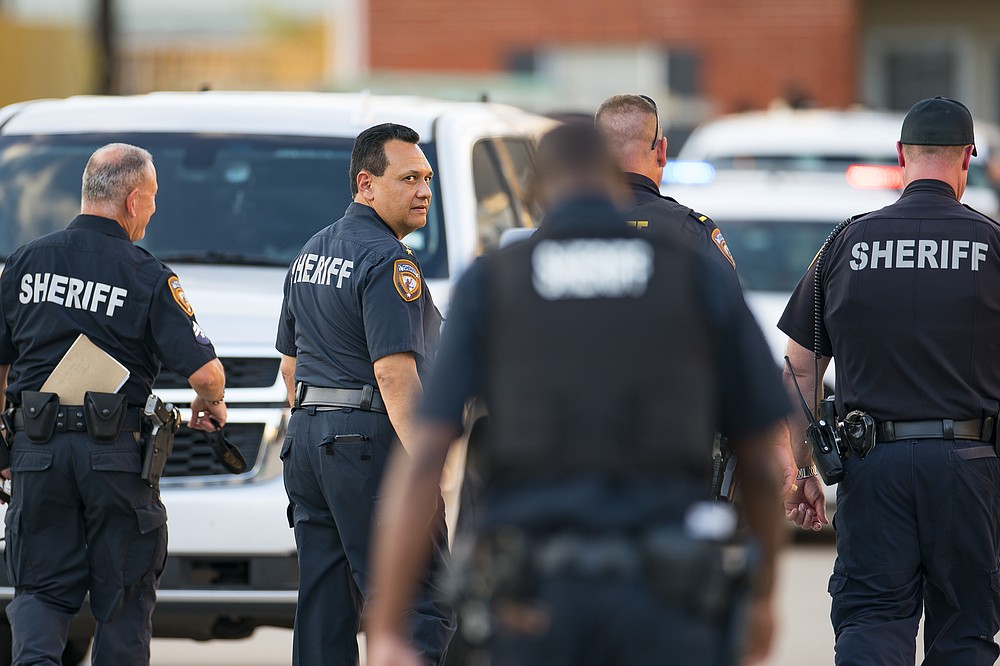 Harris County Sheriff Ed Gonzalez walks back to the scene where, according to Gonzalez, three juveniles were found living alone along with the skeletal remains of another person, possibly a juvenile, in a third floor apartment at the CityParc II at West Oaks Apartments on Sunday, Oct. 24, 2021, at in west Houston. (Mark Mulligan/Houston Chronicle via AP)